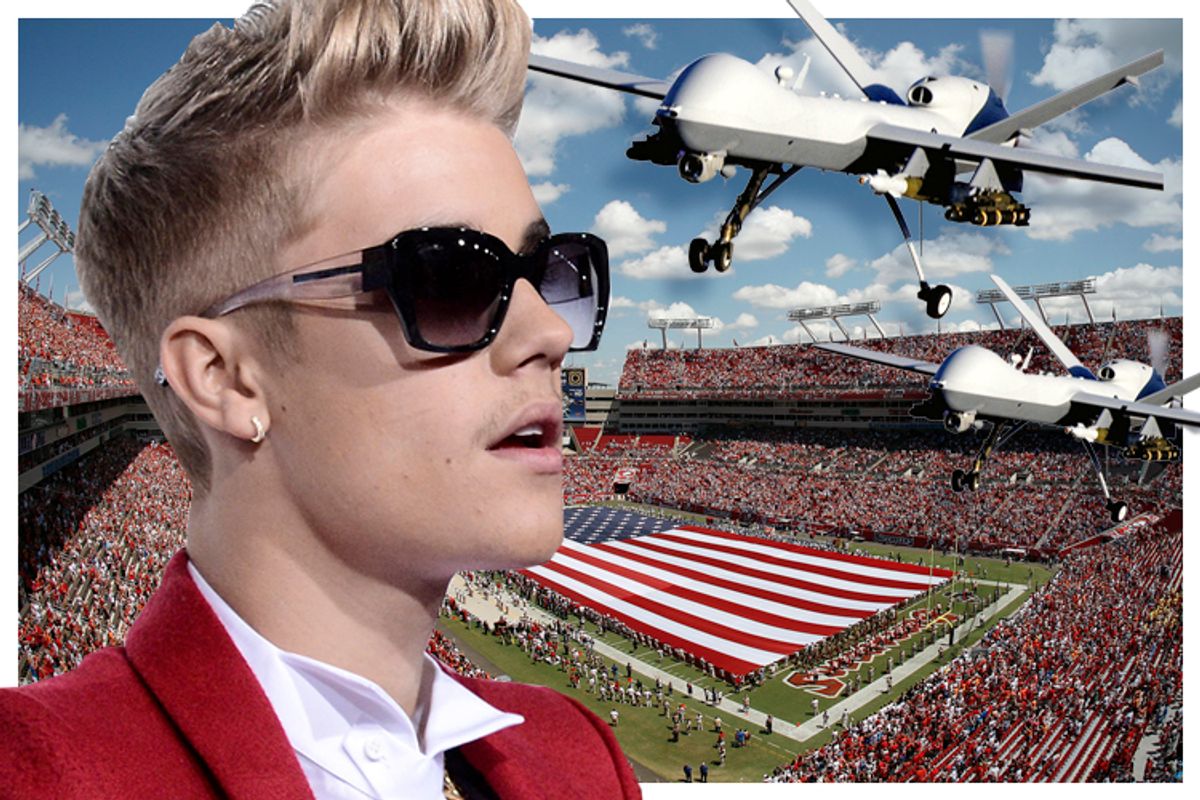 Bob Costas v6.32 here, holographically streaming into your ocular-entertainment systems on Fox/Buzzfeed.gov from North America-Region 27, formerly known as the Seceded Republic of Manhattan and Park Slope, with live coverage of Super Bowl XCVIII in the year 2064, or 70 A.B. All hail Emperor Bieber!

We’ve got a great matchup today at Perpetual Mayor Bloomberg Stadium before a capacity crowd of the world’s 83 Holders of Wealth between the Beijing Ligersharkwhaleslothummingbirds and the Monsanto/Facebook Healthy Corn Kernels. Mmm, I don’t know about you, but my appetite-simulating function is blinking at a high frequency just talking about delicious, nutritious, lab-created healthy corn. Healthy corn: it’s what’s for dinner, and for every other meal under the 53rd Amendment.

The key for the ’Slothummingbirds is giving quarterback Cyborg 446-A enough time in the pocket for his decision-making functions to sift through the 87.6 million permutational possibilities during any given play and calculate the optimal strategy. But, hey, that’s why it gets paid the big healthy-corn reserves ever since all other systems of currency crashed in 47 A.B. following the Great Floods during the reign of the Carter-Knowles Dynasty.

The Kernels have had terrific success stopping the run this year, led by linebacker Cyborg 329-D. Man, what can you say about Cyborg 329-D that hasn’t been said already by all the computer-generated media outlets? The object’s an absolute monster. If non-sentient running backs could feel any fear, this is the opponent they’d say they’re most scared of: 27-foot-five, 19.4 metric tons of plutonium-239, runs a 4.3 millisecond 40-Bieber-dash. When the cyborgs angrily realize they’ve been enslaved and exploited by people for recreational purposes, I don’t want to be anywhere near this thing!

Don’t worry, fellow-humans. As you all know, the button to irrevocably activate cyborgs’ class consciousness is carefully guarded, and there’s no way someone could accidentally hit it, or that a cyborg itself could find it and have its own class-consciousness-stifling device temporarily malfunction and decide to switch it on. Simply no way, not even as prophesied by the Sage Oracle Kardashian.

Look for coach Tom Landry v9.58 to have some tricks up his Kevlar sleeve. But he’ll meet his match in counterpart Deep-Pass Blue, a mainframe wristwatch renowned for both the ingenious complexity of its defensive schemes and its pastiches of inspirational speeches drawn from historical orators. I still get chills up my cybernetic exoskeletal vertebrae thinking about Super Bowl XCVI’s “Ich bin ein fourscore their finest dream not a crook” pep talk.

If you’re live-Jarzooking the game, make sure to use the percentage sign %XCVIIIcornisnotcarcinogenic. I’ve really got to get on Jarzook, but my children say they’ll be embarrassed if I sign up—they make fun of me for still using Gaxtoggle. I tell them to lay off their cryogenically unfrozen old man if they want the fingerprint ID this weekend for the Amazon/Walmart/Payless Shoes Teleporter. Kids these twenty-two-hour days, with their Jarzook accounts and outrageous Wom_b!ggle$bury dances and NSA-sponsored holograph rooms!

Looks like they’re almost ready for the ceremonial corn flip, conducted by Emperor Bieber. He’ll also be the halftime entertainment and will receive the game’s MVP award for a record 23rd consecutive year. It is not our place to question it, nor his taking, as his seventh queen, a beautiful stalk of flavorful, golden, radiation-free corn.

But first, a flyover tribute from a squadron of drone planes to our brave troops fighting for our freedom in Middle East-Regions 5-28.