The booming science of "people analytics" is putting our bodies, minds and even our politics to the test 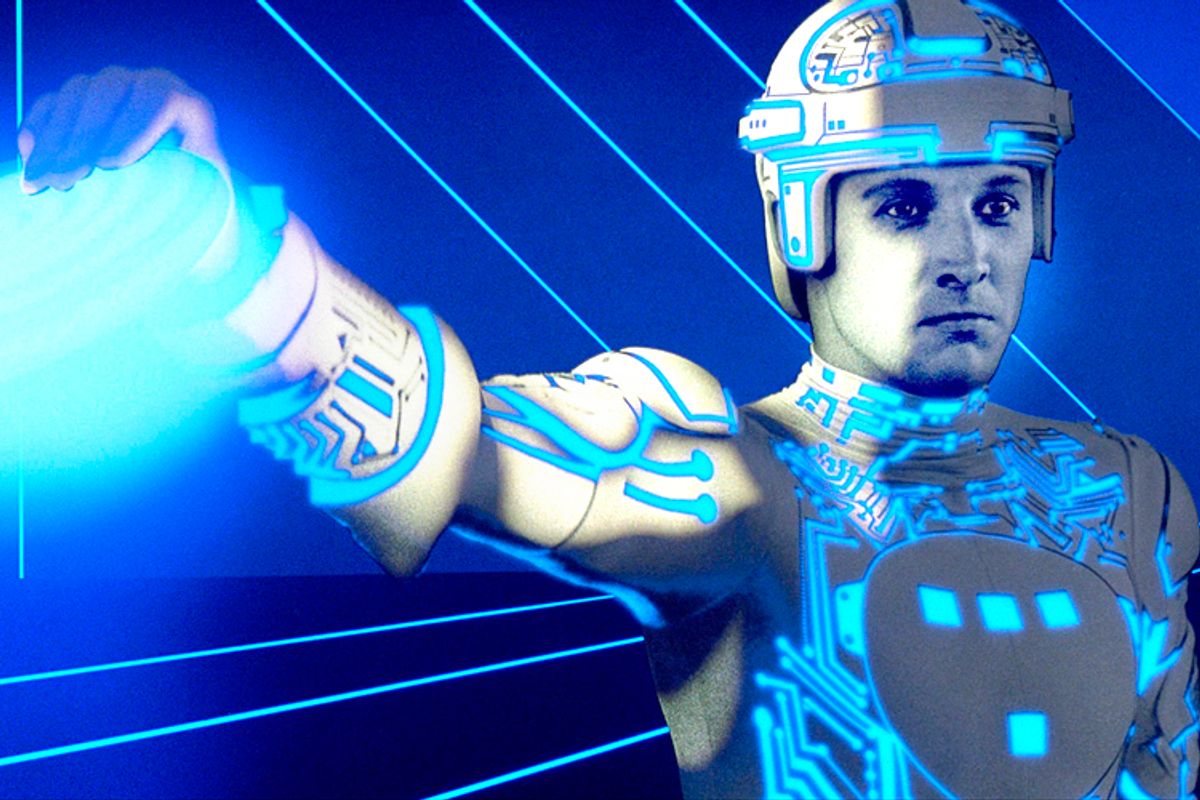 Like any good cyborg soldier from the future, I was wired up. A head-mounted video camera equipped with infrared LEDs monitored my pupil dilation and tracked my gaze. On my index finger an optical pulse recorded my heart rate. Two other sticky pads on the fingers of my left hand measured electrodermal activity (aka "galvanic skin response"). The leads from all three sensors were connected to a wireless transmitter on my left wristband.

Before the action even started, my pulse was racing. Gamers know the feeling. You're about to tackle a hard level, or go up against a big boss who has already stomped you into bloody pixels more times than you'd care to remember. Your heart starts pumping. Maybe even a little sweat begins to seep from your pores. You flex your fingers, adjust your posture, position your fingers over the mouse. It's do or die time.

Welcome to your next job interview. Because that's exactly how I felt moments before launching into a set of "cognitive video games" devised by the "employment assessment" company Prophecy Sciences. My pulse was spiking because more was at stake than the life of my avatar. Prophesy Sciences intended to use the data I generated while gaming to determine what kind of worker I was.

Staffed by a handful of Stanford neuroscience Ph.D.s, Prophecy Sciences is an ambitious recent arrival in the fast-growing world of "people analytics." Prophecy Sciences believes better data is the key to helping employers match the right jobs to the right workers, and even to assemble teams in which employees are guaranteed to be compatible with each other.

The notion that our mental makeup and employment suitability can be analyzed by data gathered from our physiological and behavioral responses to a video game is, to some people, a bit more creepy than a pee test. When I wrote about this phenomenon in December, I wondered if companies like Prophecy Sciences were leading society down the path to a rigid algorithmically driven meritocracy. What happens to our lives when the machines know us better than we know ourselves?

But I was also dying to know how Prophecy Sciences would assess me. Was I a risk-taker? Too independent for my own good? Destined to "work well with others"? Creative, or a drone? Besides, I have plenty of experience in the video game domain. Bring it on!

A few days later, I received the results (I'll include the full analysis below). I have an "interesting cognitive makeup," wrote CEO Bob Schafer. People like me are "most likely to be motivated by solving interesting problems in the workplace, and less likely to be motivated by competition or monetary compensation." People like me also "typically prefer flexible work environments in which they are frequently stimulated by new ideas." As far as career fit, my strongest correlation was with "people in marketing." My weakest fit: venture capitalists. Oh, and politically, I am most likely to be a Democrat, though there was also "significant overlap with libertarians."

I gotta say (mindful of how many members of my profession end up in marketing or P.R.), Prophecy Sciences was mostly right on the money. I have seen the future of work, and it looks a lot like a video game.

The test was divided into six games, each preceded by a short tutorial. One game tested negotiation strategies. You and a computer-generated counterpart are each given $10 to split between you. You make an offer -- six for me, four for you -- and get a yes or no. The respondent then makes an offer -- seven for him, three for you -- and you accept or reject. Another game requires you to sort cards according to their color, shape or number -- but the rules change at random, impelling you to adjust by trial-and-error. A third "game" asks you to choose between pairs of faces -- which is more skeptical, reliable, intelligent? And so on.

Taking a test like this is instantly engrossing. Not only are you trying to score well on individual games to boost your perceived performance; you're also trying to figure out what exactly is being tested for, and altering your strategies on the fly according to your evolving understanding. So your behavioral response is a mixture of pure reaction and strategy.

The physiological "biometric" responses, on the other hand, are less amenable to willful control. Analysis of my results afterward indicated pulse rate spikes and other physiological drama when I did particularly badly on a given exercise, or in the moments before a new game was about to begin. It's one thing to think to yourself, "keep calm and carry on!" It's quite another to actually be calm.

The games, says Schafer, are all designed based on various insights gained from studies in cognitive neuroscience. In some cases the purpose seemed obvious. One game delivered higher scores for guessing the right answers earlier, and penalized me for taking longer to make sure I was absolutely correct. It wasn't hard to figure out that this game was measuring my willingness to take risks, to trade accuracy for speed, while seeking the big payoff.

But how could they figure out my political affiliation, I wondered. I asked Schafer, and his response is worth including in full:

Democrats tend to take longer during every phase of the Ultimatum Game (the negotiation task), and tend to make more generous (or "fair," as a Democrat might say!) offers to the opponent. They also have more deliberation time in certain non-interpersonal decisions, such as the Card Sorting Task. In terms of a psychological "speed/accuracy tradeoff," Democrats are more likely to favor accuracy over speed. Democrats also have relatively higher skin conductance levels when making face judgments about women. Although I don't yet know the meaning of this signal, it's possible that it's related to a conscious attempt to override the gender bias that influences most people's initial judgments.

The signals that correlate with being a Libertarian point toward a common framework of structured decision-making. They typically make smaller, less variable proposals in the Ultimatum Game, and have fast response times in several other tasks, including the Card Sorting Task. An interesting biosignal correlate is their relative heart rate during the Choice Task (the repeated probabilistic gamble involving two spinner wheels): the Libertarians most frequently have lower, more relaxed heart rates during this task, compared to non-Libertarians. Although we'll need more information to make a strong claim about the meaning of this correlation, it's consistent with the idea that Libertarians are comfortable making logical decisions using objective evidence, such as probabilities.

Although I'd have to dive into your results to confirm this, it's possible that you'd be a "Democrat with some Libertarian overlap" if you had the interpersonal behaviors common to most Democrats, but the decision-making style of most Libertarians.

Notice the repeated use of the word "correlate." Prophecy Sciences does not analyze your data in isolation. It compares your results to the rest of the people in its database. And for many of those people, it has extremely detailed demographic knowledge. After I took my assessment test, Prophecy Sciences asked me if I would fill out a survey that asked what I considered to be a fairly comprehensive set of personal questions.

When Prophecy Sciences looked at my gaming results, they didn't necessarily need to know why my "biometric and behavioral signals" suggested an affinity for marketing and Democratic politics. All they needed was the correlative pattern that pointed to those things. Of course, Prophecy Sciences does want to know why. There's a back-and-forth process between correlation and test design; Prophecy Sciences is constantly refining their analysis based on the new data they've processed as more and more people complete their tests.

But in theory, as long as you have enough people in your database, the data that you need to plug those people into particular boxes could be anything at all. It doesn't need to be the results of a half-hour of carefully designed video games. It could be the way you use Netflix, or the particular pattern of data generated by the constellation of apps on your phone or the daily deluge of data points generated by all your interactions with Google on a single day. Your data creates patterns, your patterns correlates with other people, and those groups have specific, useful attributes, whether for targeted advertising, or political organizing, or employment suitability.

In this world the size of the database is crucial. So far, Prophesy Sciences has assessed only around 400 people. It's a time-consuming process that requires physical interaction with specific hardware, so it goes slowly. But Bob Schafer told me that the company will soon introduce an online dashboard test that will dispense with the sensors and just generate data from your cognitive game responses. The goal, obviously, is to vastly expand the number of people in Prophesy Sciences' database, which will in turn improve the quality of the company's assessments.

But the vast majority of all of us are already engaged in generating near infinite streams of data for the likes of Google, Facebook, Netflix, Amazon, Apple, Twitter and every other provider of Web services. We are generating profiles of ourselves that plug us into demographic niches of astonishing granularity.

I wanted to take Prophecy Sciences' test because it seemed like a fun, potentially insightful challenge. But what I came out of it with was an even deeper understanding of how much I am telling the world about myself, every minute, of every day. This video game never ends. This job interview is permanent.

You have an interesting cognitive makeup, characterized by tendencies and biases in a few revealing areas. You score strongly toward the "steadfast" end of the spectrum in Cognitive Flexibility. This tendency, along with your "speed" score in Speed-Accuracy Tradeoff, suggests that you thrive in environments that let you execute quickly to reach your own, internally-defined goals. Your Cognitive Specialization is slightly more peaked than average, with a bias toward numerical processing.

Finally, I'll leave you with a handful of predictions that our algorithms have generated. The main value that we provide companies is the ability to measure "intangibles" like company culture, and identify the best correlates of performance measures of interest. For individual reports we include a few miscellaneous, fun, and hopefully interesting predictions based on factors you share with specific groups of people. While many people find that these predictions resonate with their own experience, they can also reveal surprising groups to which you are cognitively similar.

--Of the dozen or so careers for which we have the most data (and that doesn't yet include careers in media!), you cluster well with several groups. Your strongest fit is with the people in marketing who have taken the test.

-- Your next closest fit is with the entrepreneurs. People with this cognitive makeup typically prefer flexible work environments in which they are frequently stimulated by new ideas.

-- Your loosest fit is with the venture capitalists. You can learn about the archetypal VC cognitive makeupon our blog.

-- If you were to take the SATs today, you would likely score in the very high range (over 1500). People with your behaviors and biosignals typically performed better on the verbal component than the math one.

-- Some other fun ones (and I'd like to reiterate that these are included only in individual reports, and not shared with employers or other parties): based on people who you are cognitively similar to, you are most likely to be a Democrat (but also have significant overlap with the Libertarians); you would likely describe yourself as outspoken, though not necessarily confident; we'd predict you to be in the top quartile for duration of job tenure.