From Beyoncé to Bruno Mars: Why no Super Bowl halftime will satisfy everyone

This year's halftime act feels a little minor. Why are big stars afraid to take on the biggest of spotlights? 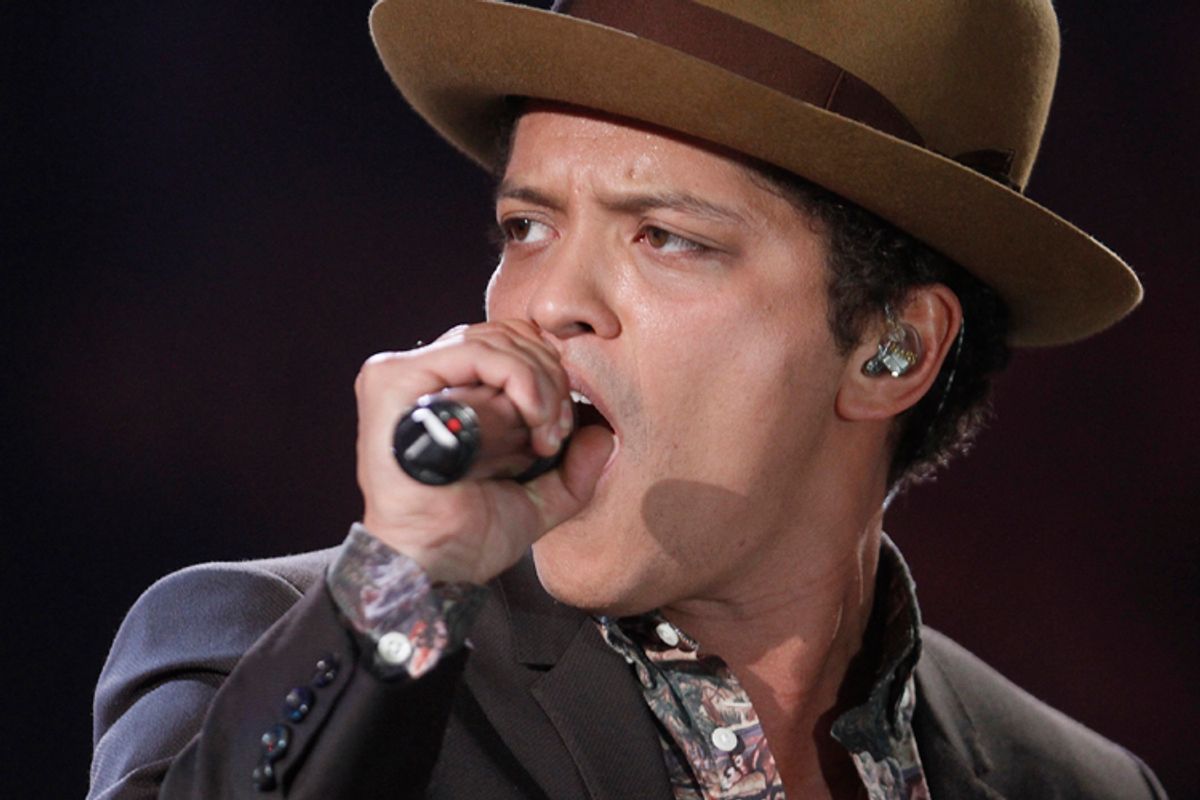 Bruno Mars could well overcome the doubts the public has over his halftime show performance -- but his very presence proves just how difficult it is to satisfy everyone with a single performance.

In the wake of the announcement that Mars, the 28-year old singer with several huge hits ("Grenade," "Locked Out of Heaven") under his belt, would be following Beyoncé's performance last year, there were two main streams of critique. The first was from old East Coast partisans who regretted that Jon Bon Jovi or Bruce Springsteen would be unable to perform at the first-ever New Jersey-set Super Bowl, a critique easily dismissed. After all, Springsteen has already had his moment of Super Bowl glory and a set of Bon Jovi's greatest hits would fall short of the 12-minute halftime show slot. And New Jersey, its residents' own beliefs aside, does not have particular qualities that make it more deserving of a geographically themed halftime show than recent host cities Indianapolis (which saw a performance by Detroit native Madonna) or New Orleans (where Houston vocalist Beyoncé belted).

The second was a little tougher to dismiss out of hand. His repertoire of hits and his reputation as an unusually energetic entertainer aside, was Mars really a big enough star to perform to a crowd of more than 100 million? Even the usually circumspect New York Times arts pages noted that Mars seemed a bit low-wattage for the Super Bowl spotlight, and speculated that the inclusion of guest act Red Hot Chili Peppers might be a tactical attempt to broaden his appeal. As New York magazine's Jody Rosen pointed out, Mars is among the most talented, if not the most talented, live performers of his generation -- but is there an x-factor of pure uncut stardom missing?

Taking on the Super Bowl halftime show is a bit like hosting the Academy Awards -- everything you do will will be accepted by the audience without compliment, while every error is subject to Zapruderish picking-apart. Sure, Beyoncé did the halftime show as well as it's likely to be done last year. But the chatter around her performance was largely about perceived mistreatment of Destiny's Child bandmate Michelle Williams, who landed unsteadily after being shot out of a cannon and who strained to be heard. In 2012, Madonna tripped on the bleachers while singing "Music" and enlisted a passel of palatable-for-all-ages guests for a dour-ish recitation of her hits; her entire performance is now remembered for guest M.I.A. flipping off the camera. As though conscious an error would get them mocked, the four Black Eyed Peas delivered one of the lowest-energy performances in recent memory in 2011.

And before the three most recent Super Bowls, there was a long post-Janet Jackson (or post-Justin Timberlake, if you choose to remember the 2004 FCC scandal by its actual perpetrator) period of all-male legacy acts delivering oldies. Of Paul McCartney, the Rolling Stones, Prince, Tom Petty, Bruce Springsteen, the Who, and all their associated backing acts, only the "Purple Rain" star delivered a performance with anything resembling dynamism; The Who in particular just stood there and recited their past hits like unwilling pageant participants.

No wonder Bruno Mars, a young star with everything to gain, would say yes to the Super Bowl; more-established stars aren't actually going to turn the public on to their music with a performance there, and can either do as straightforward and bland a performance as possible or risk alienating Twitter with an error. The list of stars with bigger public profiles or more outsize personae than Bruno Mars -- Jay Z, Lady Gaga, Drake, Rihanna, Katy Perry, Taylor Swift -- reads like a list of people, not all consistently dynamic live performers, who don't actually need to undergo the tsuris of Super Bowl prep in order to be big stars. It seems little coincidence that, the supply of "American Idol" winners and finalists having finally been exhausted, the NFL tapped an opera singer to belt the national anthem on Sunday; we're not just out of massive entertainers willing to do a 12-minute set, we're also out of pop singers who can really sing, or are willing to try to fake it. Mars and Renée Fleming will likely do fantastic jobs with their respective gigs, while risk-averse megastars sit in luxury suites on either coast, glad they're not up there themselves.

Ultimately, when the jokes subsided, the Super Bowl helped bring Madonna back into American living rooms and helped cement Beyoncé's status as a one-named living legend. But anyone who's not possessed of once-in-a-generation charisma could see their career torpedoed. (Have we heard from the Black Eyed Peas since 2011?) In an era when everyone's able to have their say online -- and one in which the NFL has seemed, still, opposed to anything too risqué since their brush with Janet Jackson's areola -- is there a single entertainer who could, or would want to, speak to all of America at once? Those entertainers more famous than Mars still are, in an era of divided attention, far more niche acts than were past generations' leading lights.

The halftime show has traditionally been a time for counterprogramming, when different channels launch brief assaults on the viewer's attention, presuming some channel-flipping. That's abated a bit in recent years, but it ought to be brought back. Next year, as NBC broadcasts, say, Pink or fun., CBS should broadcast a 12-minute Rihanna and Kanye concert, and Fox should give Taylor Swift (with special guests Luke Bryan and Kacey Musgraves) airtime, and ABC can grab a legacy act like John Mellencamp or -- why not! -- Bon Jovi. Good though he is, Mars' elevation to Super Bowl halftime act indicates just how challenging it is to speak to a nation of narrowcasters. Maybe we'd get better entertainment if the stakes were less wildly outsized; as they are, they're greater even than the greatest of our stars.