The "Super Bowl" that wasn't: How NJ is getting shafted on its biggest Sunday ever

New Jersey is hosting the first-ever cold-weather Super Bowl tomorrow night... but getting few of the benefits 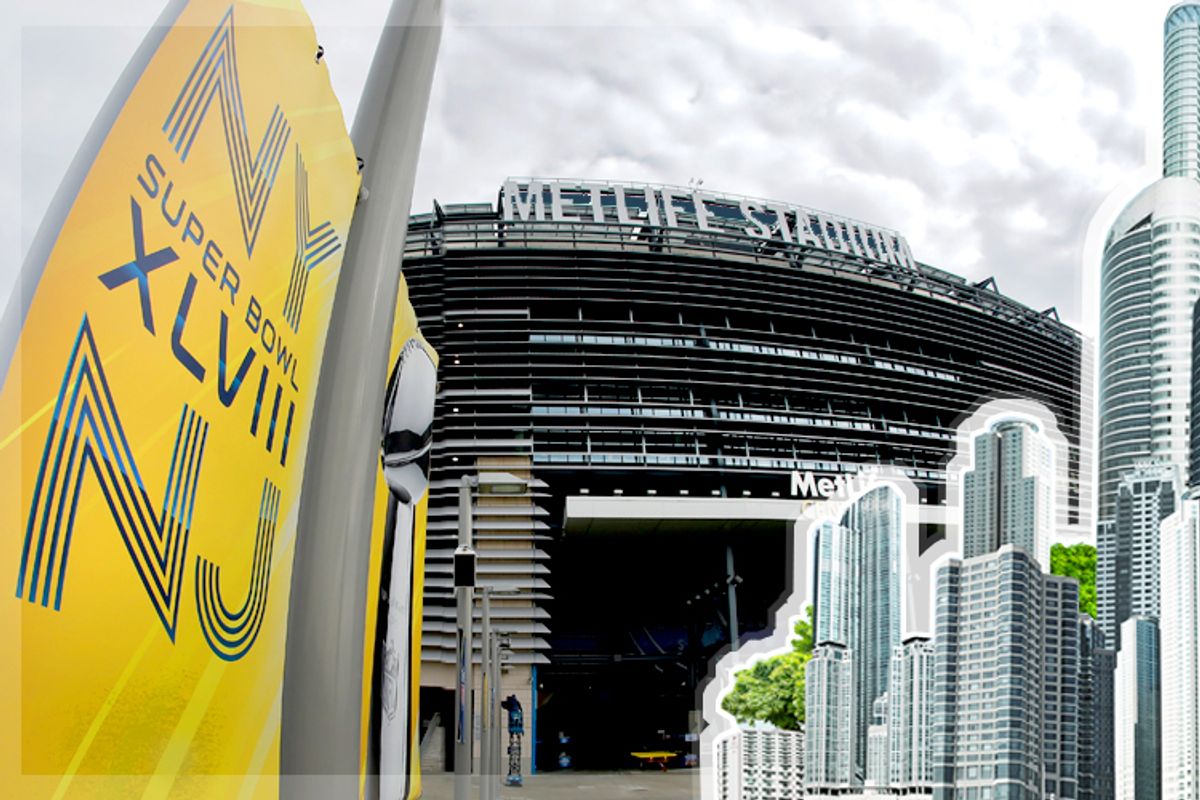 There will be two parties in East Rutherford, N.J., on Sunday. The first is the Super Bowl, the biggest event in American sports. The second, a town-sponsored block party, is reluctantly unaffiliated.

Officially, the latter event is the “Meadowlands Tailgate Party,” though some posters refer to the “Game Day Tailgate.” It doesn’t really matter what you call it, as long as you don’t call it a Super Bowl Party – the NFL keeps that trademark under tight control, and it has only lent its prestige to one party in tiny East Rutherford, population 9,000. Even the ice artist booked for the day has been warned not to carve a likeness of the Vince Lombardi trophy or the iconic Roman numerals XLVIII.

“As far as the NFL is concerned, it’s in New York,” said Jim Wald, the manager of Blarney Station, a pub in East Rutherford’s lively little downtown that is sponsoring Sunday’s Tailgate Party. The teams that play in the Meadowlands are the New York Giants and New York Jets. The blimps will float over Midtown, not Montclair.

It’s an old annoyance, but one that’s become particularly acute as Super Bowl attention turned to the New York region. Football is a civic affair in the old towns around the Meadowlands, but the approach to the Big Game has been bittersweet. Residents know there wouldn’t be a Super Bowl on the Hackensack River if Midtown weren’t just over the hills. But neither would there be a party in Manhattan if there weren’t a football stadium in New Jersey. With the Big Game in their back yard, those who live closest feel they have been forgotten.

Perhaps conflict was inevitable from the moment the Super Bowl was awarded to the region. New York has the glamor; New Jersey the gridiron. The NFL has strained to put both states in the spotlight: the Garden State is housing both teams in Jersey City, and media day took place at the hockey arena in Newark.

But it’s evident that the league considers New York City the more attractive selling point, and the perception of slight has reached the highest level of state politics across the Hudson. “Every time I hear a player or broadcaster say he's heading to New York for the Super Bowl, it makes my ears bleed,” N.J. Senator Robert Menendez said at a press conference last week, alongside Sen. Cory Booker and James Cassella, the mayor of East Rutherford. “Apparently, the NFL needs a geography lesson, too.” In a moment that perfectly summed up New Jersey’s inferiority complex, the mayor of Jersey City, welcoming the Denver Broncos to town, was mistaken for a fan.

But who needs the NFL to have a party? “We have the Game,” East Rutherford councilman Joel Brizzi recalls thinking. “We’ve got to do something, these people are going to be coming to our town!”

Sunday’s festivities, which Brizzi has been organizing for several months, will feature heated tents, food trucks and live music (Hudson County’s “The Nerds,” plus the B Street Band, a Springsteen tribute) and contests in snowball throwing and cannoli eating. As Brizzi remarks, it’s all just steps from the East Rutherford train station — a quick, car-free trip to a certain football event on the other side of town. The town is hoping to lure a few thousand fans to Park Avenue on Sunday, giving local businesses their taste of the elusive Super Bowl boost, even if they can’t use the Super Bowl name.

At least eight New Jersey communities in the environs of Meadowlands Stadium have tried to capitalize on the occasion. Montclair invited sportswriters to talk you-know-what at the Beer Bowl Huddle; Ridgewood is hosting a week-long Pre-Game Celebration, which will include ice-skating, snowshoeing, movies, games, a chili cook-off and a marching band performance. Manhattan may have Super Bowl Boulevard; Secaucus is assembling Winter Blast Boulevard.

Withholding the Super Bowl name from these towns is a cosmetic bother, but disguises a more concrete complaint: Where is everybody? Park Avenue in East Rutherford is quiet. Eddie Arroyo, who runs the memorabilia shop Legacy Sports a couple blocks from the train station here, is disappointed. “You would think that operating a sports memorabilia shop blocks from the Super Bowl would be lucrative,” he said. “You would think there would be more business but there isn’t. Right now the town is asleep.”

Arroyo had made an unusual purchase for the occasion: several editions of Seattle quarterback Russell Wilson’s rookie card with the Colorado Rockies. “You prepared yourself because you knew they were coming,” he said, “But there hasn’t been any demand.”

The Super Bowl promised to deliver $550 million in economic benefits to the New York metropolitan area, of which New Jersey had hoped to take in a quarter. The estimate, like many projections involving sports and local economies, has little basis in reality. In New Jersey, the boost may trickle down primarily in two industries: hotels and strip clubs. Everyone else is still waiting to feel the impact. “The NFL hasn’t really done anything for the borough,” said Jeff Lahullier, an East Rutherford councilman.

Even in New York, though, the Super Bowl is its own show, in the city but not of the city. Unlike organizers of the Olympics and the World Cup, the NFL makes few efforts to incorporate the host locale in the brand. Example A is the Bud Light Hotel, a 4,000-person cruise ship docked on Manhattan’s West Side that hosts concerts in a parking lot on the pier.

The Super Bowl Boulevard extravaganza, which has consumed 14 blocks of Broadway this week, is a corporate carnival that wouldn’t look out of place if reassembled, piece for piece, in Phoenix next year. If you’re willing to wait in line, you can eat free Papa John’s pizza out of a trailer. There are NFL-themed contests (Hertz), photo ops (Pepsi) and a sled ride engineered by GMC. It wasn’t clear what was happening in the Bridgestone tent, but the babble from the NFL website is emblematic of the scene at large: “Bridgestone salutes those who perform their best when it matters most and engineers their tires to do the same. Visit the Bridgestone CITE trailer for a chance to create your own performance moment.” The closest thing to New York flavor is the NYPD’s fearsome SkyWatch tower, looming over Herald Square like an Imperial Walker.

It makes an easy contrast with the Winter Blast Boulevard in Secaucus, the Jersey junction town planning a weekend party for the football fans across the frozen Hackensack. On Wednesday afternoon, Tara Krajewski, who runs the bar Charlie’s Corner with her father, was busy making preparations for a tented beer garden on the adjacent street.

Secaucus couldn’t get the NFL on board – hence the generic, if evocative, name “Winter Blast” – so this family-run dive bar stepped up. It’s the oldest bar in Secaucus, and as Krajewski proudly points out, the inspiration for the music video of Bruce Springsteen’s “Glory Days.” (In the end, the Boss had to shoot over at Maxwell’s in Hoboken, because Charlie’s ceilings were too low. But there’s still a photo on the wall of young Krajewski sitting on Springsteen’s lap.)

The Winter Blast will stretch from the beer garden outside Charlie’s Corner to the ice rink a few blocks away. There will be skating, carnival games, food and drink, along with a giant football of mozzarella cheese. If the cheese weighs in over 300 pounds, it will earn Secaucus a place in the record books.

“We gave it the Jersey flavor,” said Krajewski, who was trying to figure out when to move an arcade-style boxing machine into the tent next door. “Live music, craft beers, gourmet food.”

What it won’t be, of course, is a Super Bowl party, though Krajewski can see the stadium from her front porch. “It kind of sucks,” she said. “They took our moment to show we exist — that there’s more to New Jersey than Newark Airport.”