Earth vs. the Super Bowl: America's high holiday of waste, by the numbers 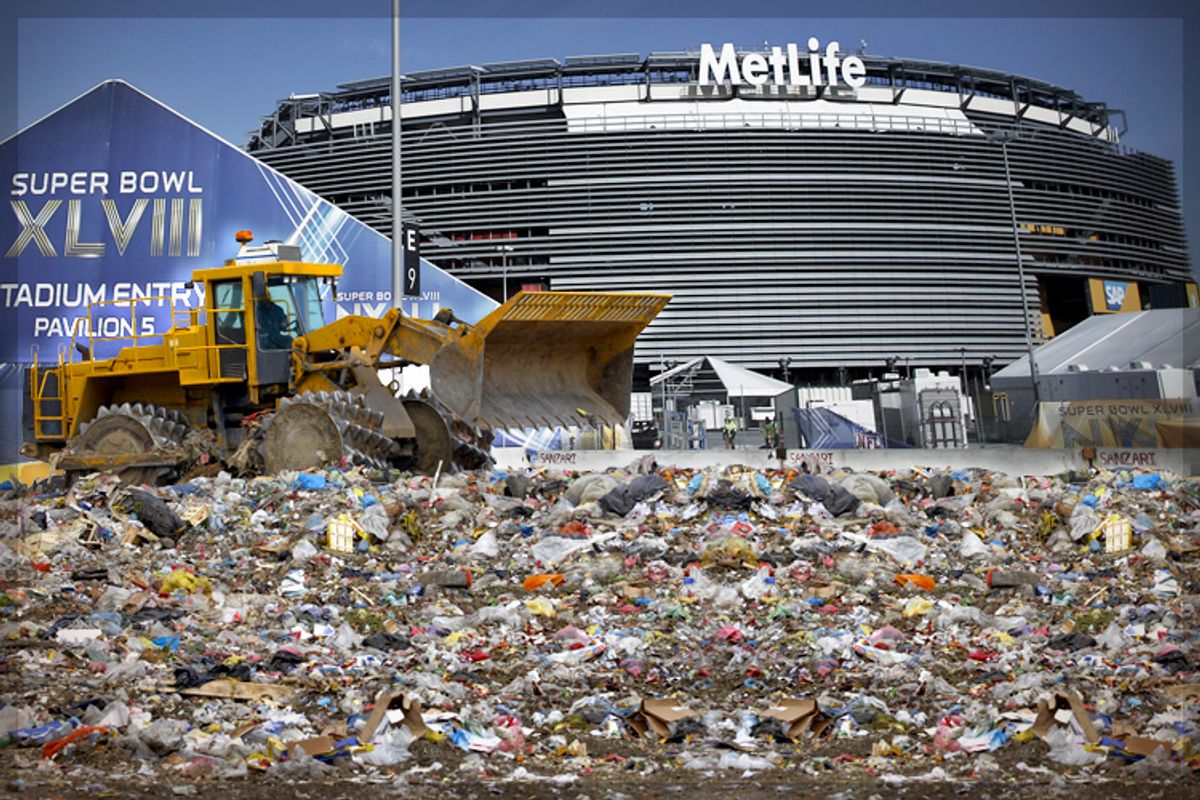 The 48th annual Super Bowl is making a play to be “the most environmentally friendly yet.” And for those who've scored tickets, this may well turn out to be the case. Over at MetLife Stadium, event organizers are planting trees to offset carbon emissions and powering generators with biofuels. They’re collecting electronic waste in New York and New Jersey to help make a "positive environmental impact" on their host cities. They're even serving local and organic concessions. Which will then be composted.

Those of us watching at home, however, are obliged to honor no such commitment to green living. On the contrary, it's days like this -- the biggest feast of excess this side of Thanksgiving -- that tend to bring out the worst in us. Get three-fourths of America (that's 181 million of us) together and in a celebratory mood, build up as much consumerist hype as you can, and yeah, we're going to be wasteful.

What Americans love almost as much as overconsumption, of course, are statistics about just how over-the-top our consumption is. Ironically, most of the numbers that get thrown around concerning the big day come straight from the people who stand to make the biggest profit. When you stop to think about it, though, are these really the things we want to be bragging about?

Here's how it all breaks down:

$12.3 billion: The total amount of spending that will go down Sunday, according to the National Retail Federation.

1.25 billion: Number of wings that will be consumed, according to the National Chicken Council -- a veritable victory for factory farming.

100 million: Pounds of avocados that the Hass Avocado Board estimates will be consumed this weekend, up 30 percent from 2013. We won't be eating local -- most of them are coming from Mexico, which upped the weekly amount it ships to the U.S. from 30 million to 40 million in order to prepare for the high guac demand.

48 million: Number of Americans who planned to order delivery in 2012, the last time the National Restaurant Association looked into it. Along with a bump in takeout, of course, comes an increase in plastic bags, styrofoam takeout containers, disposable utensils and paper napkins.

11 million: Slices of pizza that Dominos expects to deliver this year -- an 80 percent increase from a normal Sunday. As for the boxes they're delivered in? Even though they're made of cardboard, they won't be recycled thanks to the residual oil and cheese left on them.

525: The number of round trips from Seattle to Denver that Domino’s pizza delivery vehicles will collectively cover. It's unclear how many of those will be traveled by bikes or electric delivery scooters, but we're talking a lot of car mileage regardless.

49.3 million: Cases of beer purchased in the two-week period leading up to Super Bowl Sunday, according to Nielson's 2011 stats. Surprisingly, that's far less than the sales generated by other (real) holidays, like Labor Day and Memorial Day. But that doesn't mean we're still not going to generate a lot of waste..

54.5: The recycling rate for beer and soda cans, per the EPA's most recent figures. The rest ends up in landfills.

34.2: The recycling rate for glass containers. (Fun fact: You can still recycle your beer bottle even if you've twisted a lime into it.)

42.6 The percentage of Super Bowl watchers who will either throw or attend a party this year, also according to the National Restaurant Association. The best advice out there for making them slightly less wasteful comes from Colorado's biggest recycling service. Their solution: throw bigger parties, the logic being that consolidating resources will lead to less waste and fewer leftovers. Also: forget the cans, and just go for a keg (it's reusable!). Then, you know,  just try to recycle more, maybe cook some of your own food, and we'll all get through this.