"I Forgot to Remember": Living with amnesia 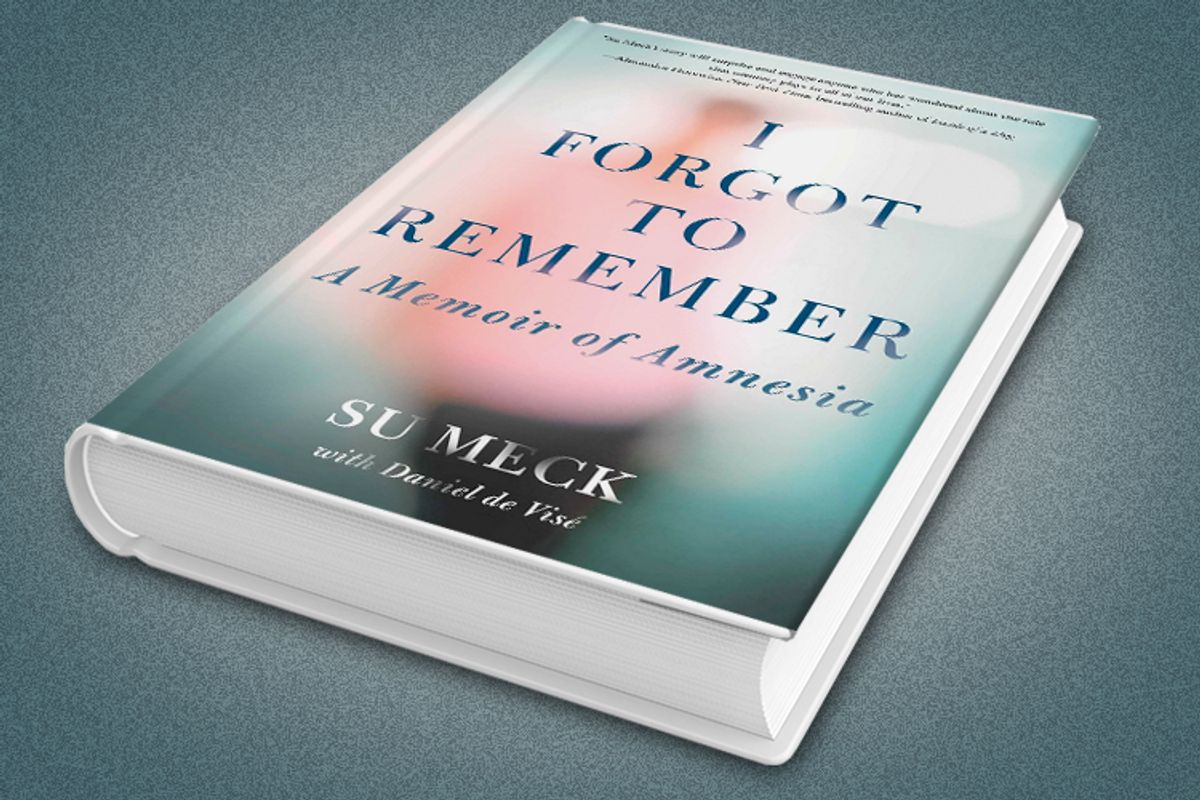 "She never knew me, and I know nothing of her except what people have told me. She rebelled; I conform. She broke rules; I follow them. She drank and smoked pot; I don't even know the taste of beer or wine, and the smell of smoke makes me physically ill. I like vegetables; she hated them. She loved to swim; I am absolutely terrified of the water." These lines, from Su Meck's new memoir, "I Forgot to Remember," describe not a long-lost mother or sister or friend, but Su Meck herself, for the first 22 years of her life. Today's Su Meck has no memory of those years.

One afternoon in 1988, Meck, a young wife and mother of two living in Fort Worth, Texas, picked up her youngest son with a shout of "Wheeee!" The 8-month-old infant apparently knocked loose a precariously-hung ceiling fan, and the fan fell, striking Su Meck on the head and changing her life forever. "I died in a way," Meck writes, "and was reborn, in the same physical form but not the same mind."

As for what happened next, Meck can't be entirely sure. "I don't remember any of what I'm about to tell you," she explains in the first sentence of the first chapter of her memoir. Her husband, Jim, rushed her to the hospital, where her chances of regaining consciousness or even surviving were seen as slim. Parts of the left side of her body were paralyzed (temporarily), and when she did finally come to, she didn't recognize her husband, children, parents or siblings. She also didn't know how to read, drink from a cup or brush her hair. During her rapid "recovery" (the extent of which was wildly overestimated by her doctors and family), she had flashes of connection to her old self -- riding a bike, playing the piano, or referring to a book she read in high school -- but these soon disappeared, and in the 26 years since, Meck has remembered nothing of her life before the accident.

"I Forgot to Remember" is Meck's account of what has happened to her since that turning point, written with the assistance (limited to medical research, apparently) of Washington Post reporter Daniel de Visé, who wrote a profile of Meck for that paper in 2011. The events of the first few years after her accident had to be reconstructed from the memories of her family and some maddeningly contradictory and erroneous medical records. ("I Forgot to Remember" could single-handedly destroy anyone's faith in the wherewithal of nurses, doctors and rehabilitation therapists.) In addition to having all of her preexisting memories wiped out (complete retrograde amnesia, a condition so rare in real life that neurologists call it "Hollywood amnesia"), Meck was also unable to retain new memories for some time. Not only did she not recognize her husband, children and house, but she failed to recognize them every morning and had to be rebriefed daily on her circumstances and identity.

Eventually, Meck became able to form new memories, but in many respects she was like a child. She still couldn't read, and eventually learned to do so by helping her eldest son with his first-grade homework. She didn't understand the nature of most adult social interactions, and was baffled by such commonplace activities as celebrating holidays, going to church and making small talk. She got by, to an often astonishing extent, by "simply observing what other people did and what other people said, and then doing or saying it myself ... I still didn't understand why I did half the stuff I did. I just knew that it was the right thing to do." This adept mimicry, however, created the impression that she was much more oriented than she was, and instilled in her a perpetual fear of being revealed as a "fraud."

Meck would most like "I Forgot to Remember" to "explain what it really means to live with a head injury," but her memoir inevitably ends up also being the story of a family and, especially, a marriage. Jim, just 24 when the accident occurred and embarking on a demanding career as a computer security engineer, thought Su seemed "okay to him most of the time," but above all "he just wanted me to be okay so we could move on with our lives." He was rarely home, and Su found herself left alone with two small boys, the eldest of whom had to show his mother how to tie her shoes; to help her stick to the highly regimented daily schedule that made their home life manageable; to cope with her "lightning strikes," seizure-like episodes that left her briefly catatonic; and otherwise to serve as the effective "head of household" when Jim was gone, which was most of the time. The son, Benjamin, began doing this at the age of four.

Su has little recollection of how smoothly things went at home during the first few years after her accident, but it seems a miracle no one was killed or seriously injured, especially when the family needed to move and Jim decided they should drive both cars across country. (He now admits that "in the world of really dumb ideas he has had in his life, this was probably the worst.") Yet a friend Su made shortly after that move was astonished when informed of her injury and its lingering effects. "You appeared totally normal," she later recalled. "I have taken 'blending in' to an Olympic-class level," Meck observes wryly, and the one person best positioned to spot the flaws in that performance, Jim, was evidently in profound denial and desperate to keep their lives on the track he'd envisioned before that ceiling fan fell. He would fly into rages whenever Su's behavior indicated otherwise, frightening her.

Su Meck's is a remarkable story and "I Forgot to Remember" is a remarkable memoir, although not for the usual reasons. Most memoirs are works of both art and recollection, shaped from the stuff of life but most definitely shaped. Frequently the contemporary memoir is written in a highly literary style, all striking metaphors and lyrical prose, arriving at a satisfying conclusion. Meck's memoir, on the other hand, is not literary; some passages have the banal cheeriness of an email update from an unbookish friend or relative: "our house was on the market and we would be moving to Northampton, Mass., that summer in order for me to start at Smith College in September. Life is never dull!"

What "I Forgot to Remember" is, however, is unnervingly honest, straightforward to a degree that makes every other memoir I've read seem evasive, self-conscious and preening. It is utterly free of signs that Meck wants her reader to think of the book in a particular way or to view her as a certain type of person. It's a story told without a moral or the urging to take away any pat life lesson (beyond the realization that a loved one who's been hit on the head might be more affected by it than he or she seems). Indeed, it makes sense that someone like Meck, whose grip on her own identity is hard-won, would care so implacably about telling the truth, even when that truth makes it difficult to leave a good impression.

This extraordinary quality becomes all the more marked as "I Forgot to Remember" unfolds and Su learns that neither Jim nor her own past is what she's been told. Her accounts of the intimate life of her marriage take on an arresting, even brutal forthrightness: "I have always loved Jim, and I have never loved Jim. In a way, Jim was assigned to me. I never really had a say, which sounds incredibly cruel, but that's essentially the way it is." And then later, "I can't say that I love Jim in the conventional sense that most married couples love each other. I have no idea what it feels like to 'fall in love' with another person. I seriously doubt I will ever fall in love, and I am totally okay with that."

Perhaps what makes Meck's reflections on love and identity so uncommon is the fact that while she's aware of conventional views on these matters, she does not seem to be invested in them the way most of us are. They're part of what she observed and learned to mimic without "understanding," but this, paradoxically, puts her in a position to see them without illusion. Unlike that of everyone else around her, her adult life wasn't the result of imagining a happy future, pursuing it with a sense of purpose and then figuring out whether or not her dreams have been fulfilled, betrayed or misbegotten. Her life was simply "the way things were" -- until, that is, she realized she was in a position to have some say about that. And seeing her seize that opportunity makes for a happier ending than any fairy tale can offer.