Playing in high school was the worst decision of my life. But as an adult, I can't get enough of America's sport 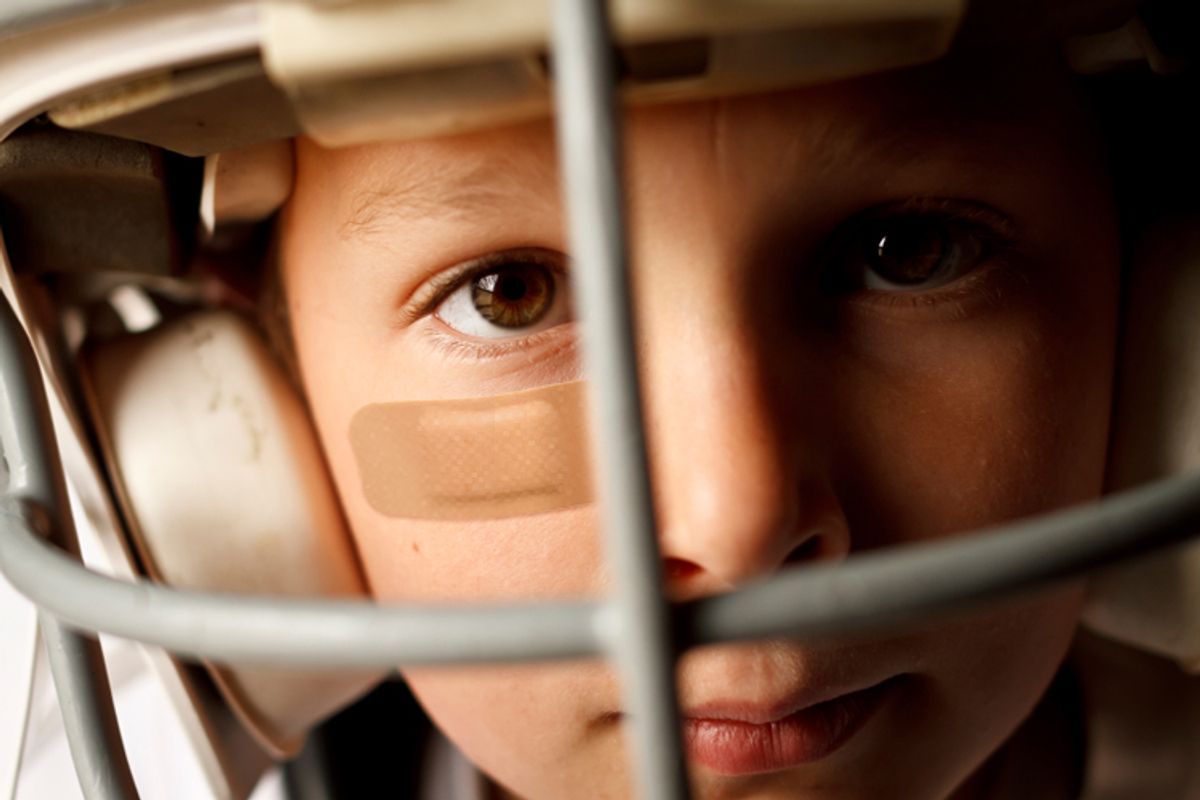 I live in Seattle, where about 40 percent of the city’s population is currently wearing Hawks memorabilia. No less than three of the homes in my neighborhood have an elaborate mascot design chalked on their driveways. And these are not the scribblings of children. They’re immaculate. Michelangelo-esque. I would not be surprised if professional artists were hired.

I’m hooked, too. I like this team. I even like controversial cornerback Richard Sherman, which should tell you how much Kool-Aid I’ve been drinking. But my enjoyment of the game is always tempered by misgivings arising from my personal experiences. For much of my early life, football was a burden and chore. And playing it was the worst decision I made in my life.

The greatest moment of my high school tenure was when I turned in my football pads for the last time. I stood in line with my now-former teammates carrying shoulder pads, a scuffed-up helmet and my dingy practice uniform in a red mesh bag. It felt like Christmas. Everyone else was sad. Some of my friends were choking back tears. Few of them would ever suit up again. Only two of my teammates went on to play in college. None, of course, ever played professionally. But we had all spent the last four years putting our mental and physical health in great danger under the somewhat careful supervision of adults.

My teammates had seemed to love playing the game, but I hated almost every moment of it. I had been “recruited” out of middle school at 14 by coaches and future schoolmates. I wasn’t chosen because I was strong or fast, mind you, but because I was overweight. And because I was deeply susceptible to social pressure.

By the time I was a high school senior, I could bench-press 312 pounds, my weight had ballooned to over 250 pounds (I am 5’9”), and I had undergone surgery twice: first to remove a bundle of blood vessels on my hand that had become inflamed from being repeatedly stomped on, then to repair a torn ACL and lateral meniscus in my knee, which had exploded after I was hit by one of my best friends during special teams practice. As he helped me off the field, he apologized while openly weeping. I felt terrible for him. He had only done exactly what he was supposed to do.

After the equipment manager finished my paperwork and gave me a friendly nod, I hobbled away in my leg brace, doing cartwheels in my head.

Back then, I was never much of a fan of the sport. I liked it fine, but I preferred basketball. As I’ve grown older, I’ve come to appreciate sports more as a story being told. The interplay of diverse personalities, the sense of history being made during the best games and series. I defy you to watch documentaries like "When We Were Kings" or "Magic and Bird: A Courtship of Rivals" and tell me these “games” don't have the ability to create revelation.

These days, my favorite sport is definitely pro football. The NFL might be a terrifying juggernaut of shady business management, union disparagement, outright corruption and nearly infinite rivers of cash. But the product that the NFL provides, when played at full ferocity, is just so damn exhilarating.

Quite simply, it is simulated warfare. It elicits people’s innate desire to see two armies pound each other into submission in search of an unqualified winner, without all of the messy, depressing death of actual warfare. The real casualties involved in pro football are generally deferred until later. But beyond the allure of mere blood lust, the game is also filled with grace and microscopic precision. The best football players have to be gladiators, yes, but they also have to be strategists. Few can excel at the highest level without poring over hundreds of hours of tape each year. Only the obsessives, the truly driven, can persevere. Football celebrates strength and intelligence. It also celebrates excess, aggression, machismo, strictly confined individualism and conservative values. It is, of course, the most genuinely American of sports.

And yet, I still can’t separate any of that from the reality of playing the sport: Some of the worst experiences of my life came through football. There were the six days of summer vacation spent at a preparatory football camp in Idaho prior to my senior year. I lived in a dorm room where water from the showers collected in a giant pool on the floor, making it impossible to begin each day with dry socks. The college that ran the camp gave us helmets with forehead pads that were so hardened with age that we all walked around with rectangular bruises on our foreheads. About a third of us had a thin trickle of blood running down our faces after each practice. We burned through aspirin bottles, but when some of the (clearly drunk) coaches caught my friends gambling after lights out, they trotted them out in front of the dorm windows and physically hazed them for nearly an hour.

I didn’t feel like I was a part of a team. I felt like grist for the mill. Like I’d enrolled in a voluntary prison. Worse, really, because I’d had to pay out of my own pocket to attend.

The entire four years I spent playing football, in fact, were like a prison of my own making. I hated it, but when I’d talk about quitting, I’d be pressured by coaches and teammates into staying aboard. Don’t get me wrong -- in the end, it was my decision. I wasn’t pressured by my parents. My father was fairly indifferent, though he tried to be enthusiastic at my games. My mother actively discouraged me from playing, worried that I’d someday get hurt in a way that would affect me for the rest of my life. (Imagine that.)

I believe some of the talk about how sports can build confidence and character and encourage physical fitness in kids. But football is different. The risks are so much greater than those in other sports. On top of that, as an offensive lineman, I was encouraged to be bigger. Muscle mass was ideal, and I was definitely the strongest I’ve ever been as a high school varsity football player, but weight gain was encouraged as well. I can think of no other common American sport that rewards obesity.

I was already predisposed to overeat before playing football. I’d been chubby since third grade, and I’ve struggled with weight all my life. But it’s strange to me that I found a sport that actually rewarded these awful habits. During the summer before my senior year, in the 50 days between hell camp and the beginning of practice, I would eat two burgers a day. Whole pizzas. Plates of tacos. I chalked it up to preparing for the season. Who would ever think of doing such a thing for baseball or tennis? I’ll never forget my line coach’s reaction when I weighed in. I’d been in the low 200s the year before, but when he checked the scale, clipboard in hand, he shouted, “Holy cow! 260! Wow, Vogt!”

Coach took one look at me and realized I was deeply stunned and self-conscious. “Well, Vogt,” he said, “you’re wearing that 260 pretty well. I’d never guess. Probably all muscle. Great job.” It worked. I was now an honest-to-god fat kid, but I was a fat kid with a purpose.

So much of football is unhealthy. Studies have shown that brain damage from concussions can begin accumulating in high school. During my senior season, nine of my teammates joined me on the sidelines, with injuries so severe they couldn’t play for the rest of the season. Ten kids, 16-18 years old, beat all to hell, to the point that they couldn’t play anymore. Blown knees, broken legs, broken collar bones, dislocated shoulders, neck injuries. When I was a sophomore, a player for an opposing team broke his neck. He was able to walk again, but never quite the same. The guy that hit him was the same one who broke my ACL. He cried then, too.

My high school coaches were some of the best people I’ve ever met. Genuinely caring men who honestly believed they were teaching life lessons and building character. But their jobs, their pride and their identities were directly tied to how well we played under the lights every Friday. Oftentimes this made for questionable decisions. My coach was suspended for a week after excessively conditioning the offensive line (several of us vomited and/or passed out) following an unacceptable loss. I still can’t understand it: This was one of the most wonderful, caring men I’ve met in my life. But he physically abused kids in the name of winning games -- and I was one of them.

But I don’t know what should be done about any of this. Should we not allow kids to play football in high school anymore? That’s not going to make many people happy. More than a million kids play high school football every year. More than a million kids, encouraged to clobber each other as hard as they can over and over again. Modern safety gear, ironically, has made the sport more dangerous. Often, those who make the “people today are pussies” argument cite the fact that 60 years ago, people played with leather helmets. No face masks, no mouth guards. Indeed they did, and as a consequence they lost more teeth, but were much less likely to ram their heads into each other at full speed, risking severe injury in the moment or severe brain damage in the distant future. Modern helmets provide an illusory protection. You can bash your head repeatedly. The long-term consequences are well-documented, but seem remote and unlikely in the moment.

I feel like something has to change. But there will be a hell of a lot of resistance. Many parents believe it’s important for their sons to go through this gauntlet to toughen them up. Toughen them up for life, I guess. It’s a pretty nebulous goal. Because out of those 1.1 million kids who play high school football, putting their physical well-being at risk for three months every year, only 5.8 percent will be able to utilize those skills in college. And .09 percent will see actual money from it after going pro.

And what life lessons, exactly, did I learn? I learned that it would have been far more beneficial to my future if I’d done track and field instead. What character and inner strength did I glean from it? I suffer from severe anxiety. I fear confrontation. Maybe these things are unrelated, of course, but I’m feeling pretty shafted on the benefits and rewards of America’s national pastime. My wonky knee and blown-out ankles remind me of this deficit every day.

As I write this, I’m watching America’s new “antihero” Richard Sherman on TV, charming his way through another press conference. This man used football to rise from Compton to Stanford to the grandest sporting stage in the entire world. Thousands of men have benefited from the NFL in similar ways. Living in the poorest and most neglected places in our country and becoming some of our most valued and celebrated citizens.

This is the American Dream. But it’s a dream that comes with real costs, and the question becomes how much we are willing to pay to keep it alive. It’s complicated. And despite all my mixed-up feelings about football -- come this Sunday, I know I’ll be watching.

Travis Vogt is a comedian, filmmaker and writer who has performed at Bumbershoot, Sasquatch and the Vancouver Comedy Festival. His film work has been acknowledged by the Stranger Genius Awards and the Seattle International Film Festival. "Acknowledged" means he didn't win.