This year's ads show involved dads and devoted partners. But can these new ads really break down stereotypes? 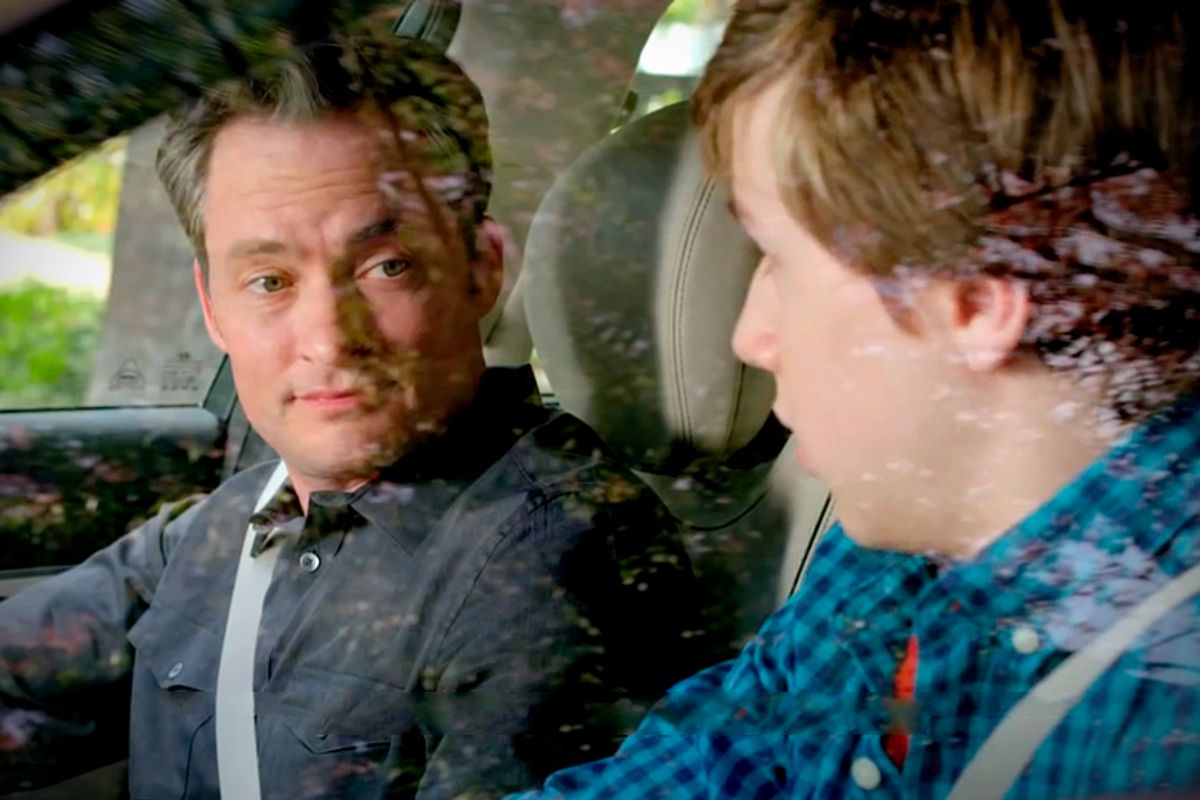 The father in Hyundai’s Super Bowl ad uses a Jedi-like sensibility and quick reflexes to save his little boy from crashing into a brick planter. With Bruno Mars singing “You can count on me like 1, 2, 3” in the background, the father saves his kid from increasingly dangerous calamities: he steps in front of his son to take the errant pinata hit; he jumps in moments before his boy reaches a lit barbeque while trying to catch a pass.

In the highly gendered world of advertising, the ability to anticipate a child's needs used to lie squarely in female territory. Now, it’s called “Dad’s Sixth Sense,” according to the title of Hyundai’s ad, and it’s just one example of how the image of men in ads is softening and how the once-crisp lines of masculinity have blurred.

You wouldn’t have found this kind of dad a few years ago. Now, of the 19 Super Bowl commercials released at the time of writing, three feature a father engaging with his child meaningfully and four others show men caring for another person or animal (or muppet).

Men make more household purchases than before so advertisers are trying to find ways to tap the changing market -- and it turns out the stoic hero, the bumbling idiot, they don’t always work so well. As a result, advertisers are cautiously stepping away from some of those archetypes.

“Ten years ago, there were clear lines, blue and pink,” said Gary Hayward, who represents Bombay Sapphire. “The gender gap is not as clear as it used to be.”

In terms of advertising, there is no bigger venue than the Super Bowl, which is expected to beat the president’s State of the Union address viewership by at least 78 million people (a difference that is greater than the entire populations of California and Texas combined). So it’s tempting to say a softened male on this big a stage is a huge leap for this country. But critics say these ads aren’t an indication of a real shift in gender politics. After all, these guys aren’t exactly cleaning up after a sick child, washing dishes or folding laundry.  And the odds that we will see a single father or a gay couple on this country’s holiest sports days any time soon? A long shot.

The ads are “pretty much saying you do need to attract a woman, you need to be a heterosexual male to be valuable,”  said Imran Siddiquee, communications director for the Representation Project, a feminist group that critiques sexist ads. “I don’t know how much it really encourages young boys and girls to think differently. I don’t know how much it really allows us to be outside the box.”

Still, it makes sense that men are increasingly portrayed as caregivers. In the last few years, some statistics indicate they have assumed greater roles in families. The number of stay-at-home dads has more than doubled from roughly 90,000 in 2000 to almost 190,000 in 2012, according to census data.  And dads have taken on shopping, according to a detailed study by Defy Media called the Acumen Report that will be unveiled in the upcoming months. The media group shared some of their findings from the survey of more than 2,000 men, ages 18 to 49. More than 65 percent said they shop for household items. Of the married men, more than half said they, and not their wives, select what brands to buy. Nearly 57 percent said they would stop buying from a company that did something offensive or illegal and 60 percent said they bought something because it was made locally.  Only 30 percent indicated that they responded to a product that was endorsed by a celebrity or an athlete.

These results imply there’s a certain amount of thought going on when a guy shops. He seems aware of how products fit into the world and how his choice plays into that dynamic. And because the male market is clearly showing greater influence in the home and correspondingly in the stores, companies are trying to figure out how to reach these guys in a way that resonates with their conscientiousness. But advertisers don’t always get it right. In a 2012 study by the same company, men said that they couldn’t relate to the women-chasing, metrosexual or macho men in ads.

“I think the gap between how men see themselves and how they are portrayed in ads is closing but not closed,” said Andy Tu, a vice president of Defy Media, who was involved in the study. “As more marketers and more media folks latch onto the fact men are changing, the ads will change but not all will succeed” in getting the image correct.

Advertisers are working on it, though. Last year, Axe (maker of men’s body wash and deodorant owned by Unilever) created an ad where scantily clad female angels with tousled hair and bedroom eyes fell from the sky and flung their halos to the ground as they lustfully closed in on a man.

That guy, the victim of female desire? He isn’t at the Super Bowl. The company instead chose monogamous characters advocating love and peace … and a line of body wash. One main character is a stern-looking general who could pass as a Hollywood version of Kim Jong-un. His soldiers are at attention in a Tiananmen Square-like plaza, he gives a signal and, instead of brandishing weapons, his army holds up placards that form a giant valentine. The woman next to him melts. Cut to a presumably Middle Eastern dictator opening a metal briefcase with a red button. He pushes it. Instead of launching a missile, it sets off fireworks delighting the young woman next to him. The tag line: "Make love, not war."

It’s a departure from previous campaigns but one that came from consumer research, said Matthew McCarthy, senior director of Axe. This product line links to a social campaign for peace, something that their consumers felt strongly about.

“When young people see they may be typed as this type of guy, or that type, they bristle at that,” said McCarthy, adding that some traditional male archetypes just don’t work. “They see themselves as in control of personal identity more than ever.”

While the guys in the ads may demonstrate a softer form of masculinity, they are still clearly male. The fathers may be shown teaching their kids to drive, roughhousing with their kids or protecting their daughters. Non-dads may share a chaste, intimate moment with a woman or maybe develop a tender bond with an animal. But these guys aren’t down in the trenches scrubbing grout. They’re still virile. It’s like they’re all patterned after "Duck Dynasty." They are men who love their wives and their families and their friends -- and then they go out and shoot stuff.

That’s what makes these particular caring guys work for the NFL. They're not going to make viewers leave. This is a sport that has been around for generations. It bonds families. It prompts get-togethers. And of course its popularity is reflected in its revenue. The league makes more than $9 billion a year -- that is nearly $3.5 billion more than the entire budget of the United Nations.

The ads show up because they appeal to the Super Bowl's core audience -- or at least what advertisers believe that audience to be.

“The last thing an advertiser would want to do is alienate their audience,” said Daniel Cook, a professor at Rutgers University who studies consumption and media. “They walk a fine line.”

Still, there is a certain level of disconnect between the sensitive men in the ads and the actual game. After all, football plays into certain tropes of conventional masculinity. The players are miked so we can hear the impact of their bodies. Scantily dressed cheerleaders perform on the sidelines. A congressional committee recently debated whether the sport was safe to play. In other words, this may not be the right venue for significant shifts in our cultural understanding of gender roles.

In the new crop of ads, “we can feel good about being progressive and not feel threatened,” said Jeffrey Montez de Oca, a sociology professor at the University of Colorado at Colorado Springs. “We do see a softening but are there fundamental changes in the structural relations of gender relationships? No.”