This is the best of Hollywood -- a diverse array of stars emerging and established, black and white alike 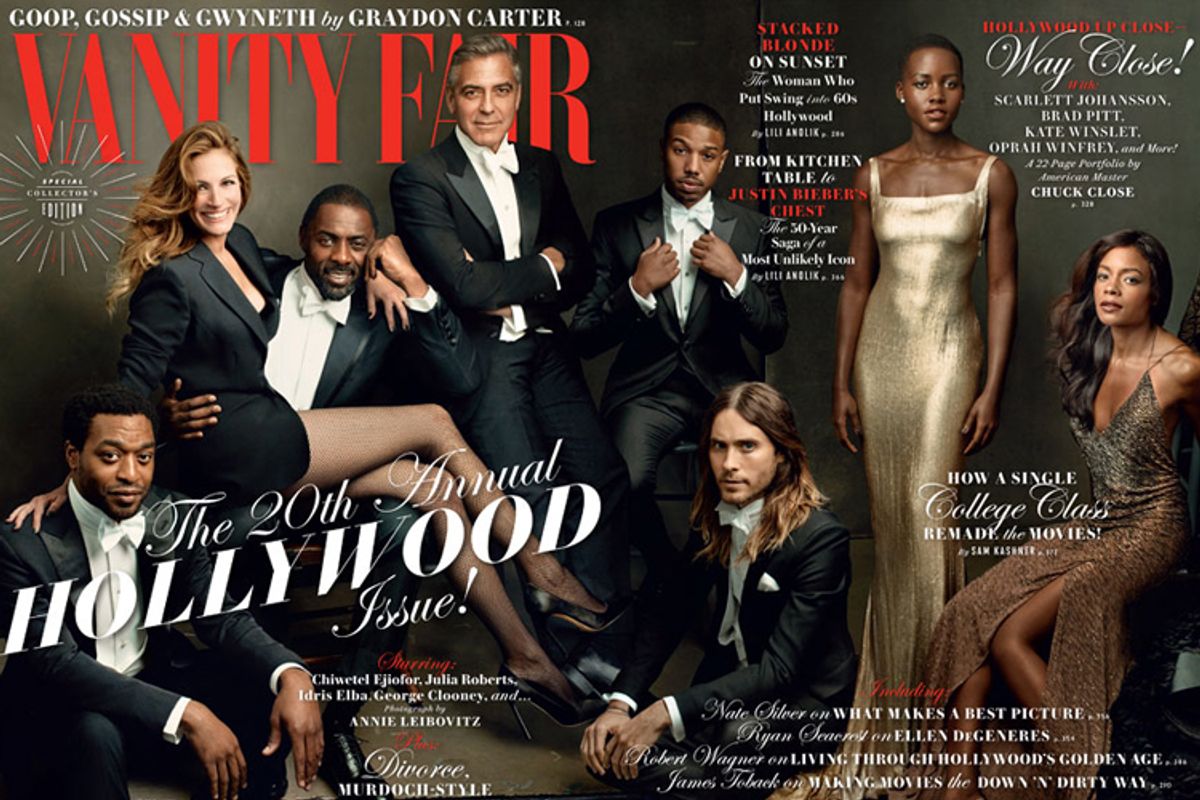 Vanity Fair's history with its Hollywood Issue cover has been one of controversy, year after year; the cover, which traditionally features a number of top stars and/or emerging talents, has been critiqued throughout its history for wildly favoring white performers.

Such a critique, coming after a year in which black movie stars moved audiences in a notable slate of well-received films, is unlikely to come this year. The front fold of the new cover -- the one visible at newsstands -- features not merely Julia Roberts and George Clooney but also Chiwetel Ejiofor ("12 Years a Slave") and Idris Elba ("Mandela: Long Walk to Freedom"). On the second fold, best supporting actor front-runner Jared Leto is joined by three black performers who stood out in the past year -- Lupita Nyong'o ("Slave"), Naomie Harris ("Mandela"), and Michael B. Jordan ("Fruitvale Station"). The final fold features Chadwick Boseman, who played Jackie Robinson in "42," alongside three emerging starlets -- Brie Larson ("Short Term 12"), Margot Robbie ("The Wolf of Wall Street") and Léa Seydoux ("Blue Is the Warmest Color").

That's a healthy and interesting mix of celebrities on every rung of the star system, from the megastar Roberts to the emerging Robbie, as well as more than just a group of white stars. Compare this to the 2011 cover, in which only two of 15 cover subjects were nonwhite -- none of them on the front fold, or the regrettable whites-only 2010 cover. Last year, the front fold featured Bradley Cooper, Emma Stone and Ben Affleck while inner folds featured black actresses Quvenzhané Wallis and Kerry Washington, prompting Jezebel to write: "Vanity Fair has been pushing the black people off of the main cover and over to the right so they'll get folded up on the newsstand consistently." This year, that pattern ended.