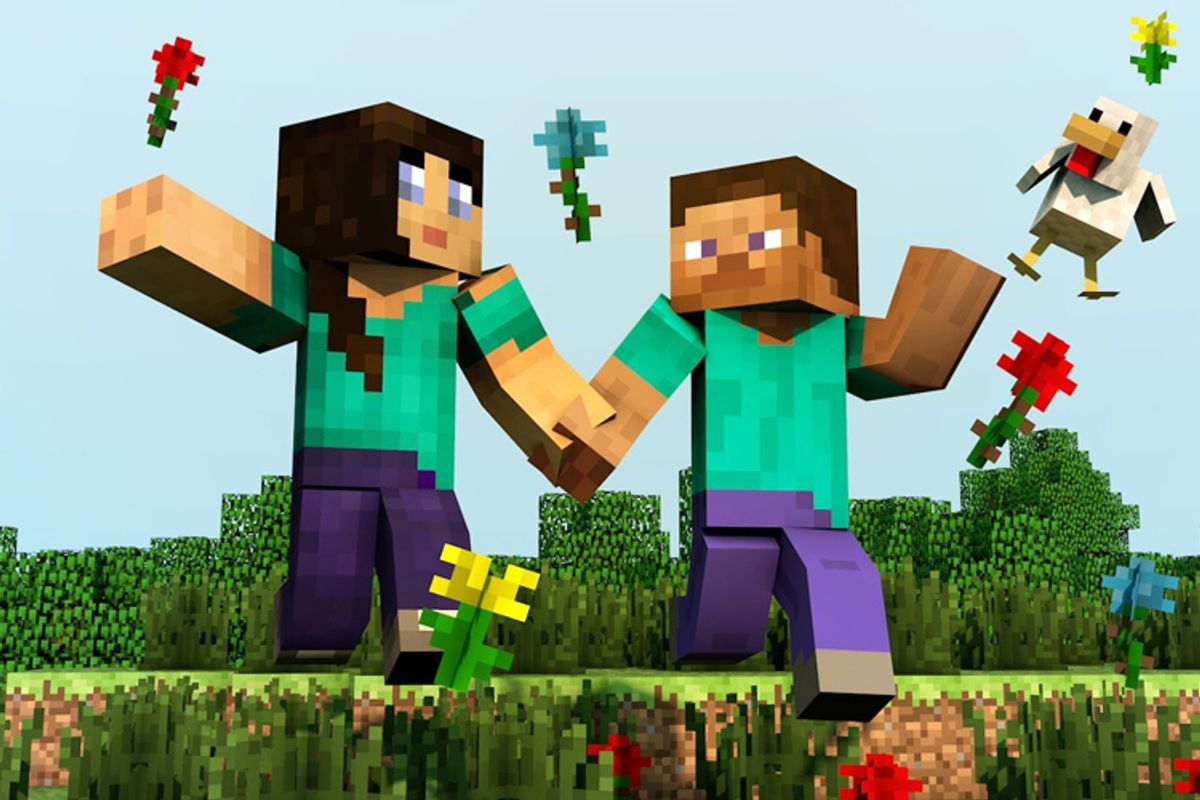 I took my 13-year-old son, Aidan, to Dallas, so he could rendezvous with a 16-year-old girl he met on the Internet.

Actually, that’s not the full story.  I was invited to be a guest writer at Southern Methodist University’s annual literary festival. When Aidan found out, he begged to join me.

Amie was the subtext of the request. Ah-mee, as he pronounced her name, a pleasing exoticism, until the friendship moved from IMing to Skyping, and she laughed and let him know that, spelling not withstanding, it was just plain Amy. They’d met through "Minecraft," a computer game that is something like the digital version of Lego. Players build worlds with virtual blocks. They do so alone or join a server and play with others, an activity that can be a matter of pure creative collaboration or considerable discord, as when another player “griefs” (unfairly demolishes another’s creation).

Amie ran Aidan’s favorite server, and that’s how they met in cyberspace.

Now they wanted to meet in the real world.

I didn’t like the idea. My “creep” feelers went out. I flashed on stories of predators who entrap young adults through false IDs, of adults who imagine they are IMing with a pretty Russian girl, only to discover they are corresponding with a robot, eager less for love than a credit card number. Still it would be fun to have Aidan with me at the literary festival.  When I agree to Aidan’s request, it’s with an awareness of how questionable my judgment sounds. “You’re taking your son to meet … wait … who?”

I have a few clues.

Amie is gay, home-schooled and often on the computer. Her mother was born in Maine (where my family and I now live). Her politics tend to the right, her beliefs to the Christian.

What else do I know?

“Her mom’s cool with the fact she’s gay,”  Aidan says.

I don’t intrude too much when Aidan talks to Amie, but I hear how animated his voice is behind the bedroom door, how much he laughs. It’s this that makes me decide Aidan can meet Amie, but only in my presence, and only if he agrees to participate fully in the literary festival. No asking to play with my iPhone during poetry readings.

True to his word, Aidan accompanies me to readings, even makes the first inquiry, when the question-and-answer periods come. “Why do you write about birds so much?  “Where can I get a magical goat?” “Are you going to see the next ‘Star Trek’ movie?” All relevant questions, given the poetry we hear. “I’m a geek, and I’m proud,” Aidan has said in other contexts, but the pride doesn’t mean happiness. Middle school has proven to be a roller coaster of emotion with serious low points.

We arrange to meet Amie for breakfast at the swank hotel where the university is putting me up. Because I am in the restaurant, I miss the moment when Aidan and Amie actually meet.  (Later, Aidan tells me they hug.) Instead Aidan appears at the end of the table with a shy, round-faced girl with a small stud below her left lower lip and straight hair pulled back into a ponytail. She wears jeans, a black T-shirt, a red hoodie and Green Lantern shoes. Her mother slides into the booth next to me. We laugh about the circumstances, but it turns out this is not the first time Amie’s mother has taken Amie to meet an online friend.

“No, I took her to Arizona to see a girl, and then she was hoping to see Sander” — this is a name I recognize, one of Aidan’s online friends from Belgium — “when we were in Paris and London.” Given they’d come from across the Atlantic, she’d hoped he’d be able to come across Europe, but it didn’t work out.

Amie and Aidan talk out of earshot at their end of the table. From their body language — expressive faces, hands flying about — I can guess that initial shyness is giving way to silly chatter. When breakfast is over, Aidan learns that there is a video game room in the student union. He and Amie jump up and down on their toes like little children and ask to be taken there. Later, back in the hotel room, Aidan tells me that Amie didn’t like being on the college campus. She was intimidated by the students.

Predictably, when I ask Aidan what he and Amie talked about, he says, “Oh, you know, stuff.”

“What kind of stuff?”

“What did you think when she said she was intimidated by the students?”

“I understood it. It’s just I have other ideas about these things.”

“So was she what you expected?”

Amie and Aidan plan to meet for breakfast the next day, but in the morning, Amie cancels by Skype. Her mother has forgotten she has an appointment with a client. I feel the wound of this intensely. Oh, no! I assume mother or child found something unacceptable about Aidan or me.

Though Aidan doesn’t have a huge circle, he makes friends easily.  He gravitates to funny boys and brainy girls.  Already he’s bonded with an SMU undergraduate and fellow "Dr. Who" fanatic at the literary festival. Still, he is bad with disappointments, and I worry how he will handle this one.

Amie sends a second Skype message. Her mother is taking her to a flea market. Can Aidan come? Since I have to spend the afternoon at the literary festival, I agree. With conditions. All of which I repeat several times. “Call me when they pick you up. Let me know exactly what the plan is. Don’t let me forget to give you money.  Call me when you come back to the hotel.”

“And look for a present for Daddy at the flea market.”

A leap of faith … that the mother is not a maniac in disguise, that she is a good driver, responsible person, etc., etc. She strikes me as all of these things, but, of course, I don’t know. I strike myself as the same, and yet my failures quickly emerge.  Aidan calls, but it is to let me know I have forgotten to give him money, then to let me know they have gone for lunch. Aidan is allergic to sesame seeds, nuts and fish. His Epi-pen is sitting in the bottom of my handbag.

Later, I am at a reading with my phone silenced but in my hand, in case Aidan calls. He does, so I step outside to call him back. There is no answer. I hang up and try again. No answer.

That’s when I panic. Why would he have called? He’s already told me he will meet me back at the hotel later in the afternoon. Why isn’t he answering? I imagine myself with a police officer in some anonymous office, where I offer details that will help us find Aidan.  As I imagine this scene, I see myself sitting by an intake desk and admitting that I don’t know, I don’t know … My god, I don’t even know Amie’s last name!

The truth of this hits me. How could I have let Aidan go off with someone whose last name I don’t even know? I return to the reading, hoping the phone will ring, barely able to concentrate, trying to imagine what could possibly be going on.  Then I remember Amie’s mother introducing herself to me, as she slid into the booth at the hotel restaurant. Her name comes to me quite clearly.  (Why didn’t I Google it last night, before I agreed to today’s adventure?)

When the reading is over, I call again. This time, Aidan picks up, happy, oblivious, what do I want? He had called because he had to ask me something, but he can’t remember what. He has bought a hat and a bow tie for himself, a mug for his father. “How much?”  I say.

That’s a lot!  And on top of lunch. “Tell them you will repay them when you come back to the hotel,” I say several times.

The next time I see Aidan, he is down in the lobby, having said goodbye to Amie.  He’s wearing a crazy orange crocheted hat with two white and blue eyes, some sort of figure from a "PacMan" game.  He is delighted and charged up. It’s clearly been a wonderful day. “You remembered to pay them back?” I say.  He starts, hands to lips.  “Oh, no!”

The trip back is long. From Dallas to Detroit with a layover of almost five hours, before we head back to Portland, Maine. It’s fun, in its own way. Aidan gets a copy of Wired and Mental Floss. I listen to an audiobook:  Herman Koch’s “The Dinner.”  We play hangman and draw cartoons in my notebook. But Aidan looks tired as the day wears on, and then truly exhausted as we board our last flight. He listens to music for the final leg. I listen to my book, but click the sound off for the descent into Maine.

Who can Aidan hang out with? Who can Aidan get in a car with? For the moment, these choices fall to my husband and me, but not much longer.  Aidan’s parameters when it comes to the real world and the cyberworld are not my own, and even if I want to change that, I can’t.  I don’t like it — it scares me beyond belief — but I also have no choice but to accept it.

I have started this trip shaky and ended wondering when Aidan will see Amie again. It’s not like I have the money to help him maintain the friendship with in-person visits. Just as I am having this thought, the plane touches down in Portland, and Aidan looks up from his iPod and says mournfully, “I want to write a list of all my friends down, so I won’t forget them.”

I expect a big follow-up session on Skype, all sorts of continued contact, but Aidan and Amie don’t speak for a long time. I wonder why. I keep trying to get Aidan to say something about the experience, but I can’t get anything out of him.

Finally, one day, many weeks later, when he is on Skype with Amie, I come in to say hello, and I ask her what it was like to meet Aidan in person. “Oh, it was great,” she says. “We really got along. It was just like normal.”