What's really in your bottled water

After the West Virginia chemical spill, residents have turned to bottled water. It's not as safe as we'd think 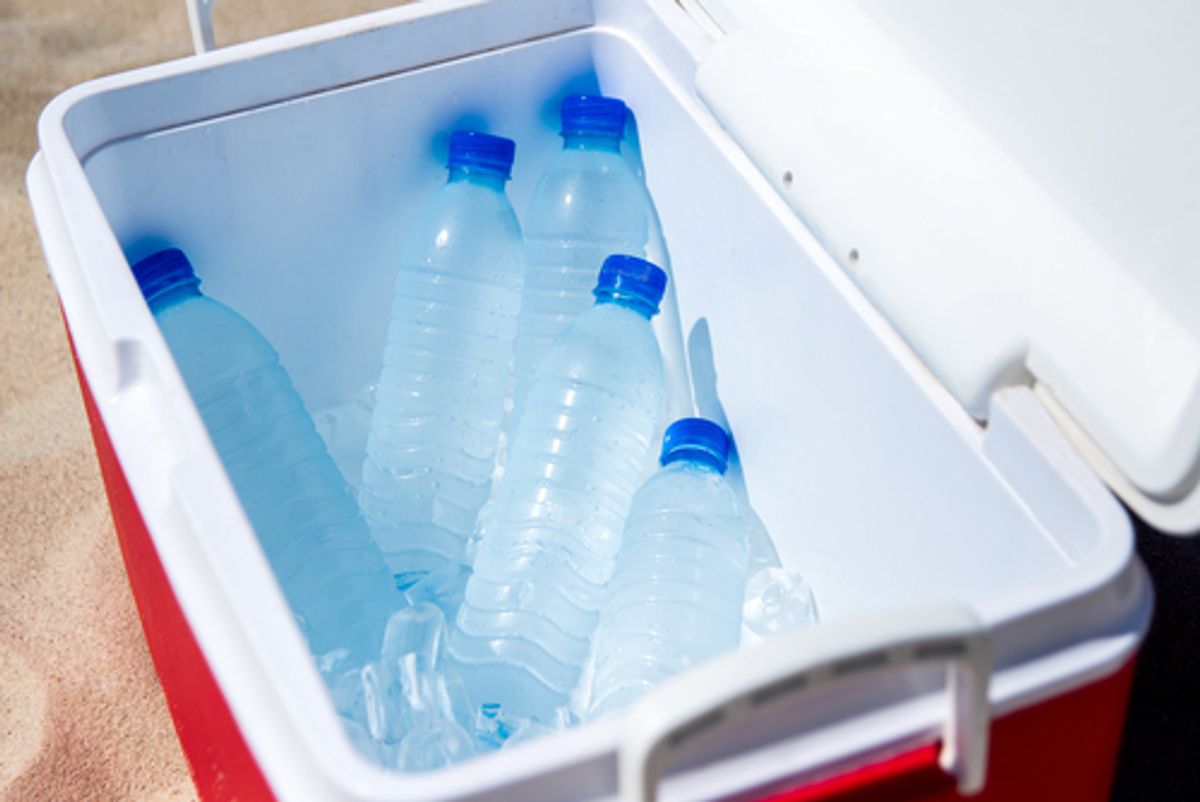 If you thought things were back to normal in West Virginia after the Elk River chemical spill, which cut off drinking water to 300,000 people earlier this month, you thought wrong.

Over 2,000 residents have called the state’s poison center to complain of symptoms—the most common of which appear to be red, itchy skin and upset stomachs—and 533 people with similar concerns have been evaluated at hospitals. More than two dozen lawsuits have been filed, mostly against Freedom Industries (the company that caused the disaster and filed for bankruptcy eight days later), but also against the chemical’s manufacturer and the municipal water supplier whose intake pipe was 1.5 miles downstream from the chemical storage facility. The U.S. Chemical Safety Board is investigating. So is Erin Brockovich. And this week three U.S. senators introduced legislation that would streamline chemical facility oversight, ensure that factories are inspected, and require proper response procedures in the case of emergencies.

Even the most basic question—is the water now safe?—remains unclear. To drink or not, Governor Earl Ray Tomblin said, was “a personal decision.” Not surprisingly, West Virginians are still buying boatloads of bottled water, and restaurants are still cooking with it. Fear and mistrust run high.

At the heart of this flurry of response and recrimination is a simple concern: How did this happen, and could it happen again—in West Virginia or elsewhere? Perhaps in my town?

The Charleston debacle began when health department inspectors, alerted to the smell of licorice in residents’ water, tracked the odor to Freedom Industries, where they found a foaming agent used in cleaning coal spurting through a hole in a tank, over a containment pit, and into the river. West Virginia American Water immediately issued a “Do Not Use” order, which eventually spread to 300,000 customers in nine counties across the southern part of the state.

By then up to 10,000 gallons of the chemical, known as MCHM, had already seeped into the river. But little was known about its health impacts, beyond the potential to irritate skin, eyes, airways, and the digestive tract. MCHM’s Materials Safety Data Sheet, which is supposed to list a chemical’s toxicity, health effects, and spill-handling procedures, has many blank fields, and there has been only one study—never published—of its toxicity, which was conducted on rats in 1990.

This is the kind of chemical that you might expect the government to regulate, ensuring its safety. But no. MCHM is one of roughly 62,000 chemicals exempt from the Toxic Substances Control Act, or TSCA, which was passed in 1976. Any chemicals used commercially before then were grandfathered in and presumed to be safe. The only way the Environmental Protection Agency can regulate or remove a grandfathered product from the market is to prove conclusively that it’s not safe. Since TSCA’s adoption nearly four decades ago, that’s only happened five times.

Eleven days after the Elk River leak was discovered, the Centers for Disease Control and Prevention pronounced the utility’s water, now with 1 part per million of MCHM, safe for drinking by everyone but pregnant women. The relief, if there was any, didn’t last long. One day later, Freedom Industries revealed that about 300 gallons of a second chemical, called PPH, had been mixed in with the MCHM. That product can irritate eyes and skin and is harmful if swallowed. As with MCHM, there are no data available on PPH’s long-term health effects. And now one scientist is saying that there might be formaldehyde in the water, too.

People shouldn’t have to be suspicious of the water that comes out of their tap—and with better safeguards and more transparent information, they wouldn’t have to. One step, on a national level, would be for Congress to adequately reform TSCA, letting the EPA properly regulate chemicals. Alas, the proposed Chemical Safety and Improvement Act, which has bipartisan support, doesn’t go nearly far enough, say environmental watchdogs, and it may provide even more comfort to chemical companies than the present law.

Bottled water will be in high demand around Charleston for many months to come. That’s great for the bottled water industry, which trades on the perception that its product is safer than municipal water (and it may be, in this case). But it ignores the fact than nearly half the bottled water sold in the United States starts as tap water. True, Dasani, Aquafina, and Nestle Pure Life run their source water through reverse osmosis, which removes almost everything but hydrogen and oxygen from the water. But according to the Natural Resources Defense Council (which publishesOnEarth) and the Environmental Working Group, other brands that start as municipal water may be bottled straight from the tap or a well, with no further filtering.

And then there’s the right-to-know issue: community water systems are required to immediately inform their customers—with phone calls, texts, door hangers, and through mainstream media—of any safety breaches. That’s something that West Virginia American Water got right in this case. Bottled water companies are under no such obligation. Nor are they required, as utilities are, to reveal the results of their daily or weekly water quality tests.

Don’t get me wrong: I’m glad bottled water is available to help West Virginians and the millions of people in the United States who lack safe drinking water (most of whom live in small towns or on Indian lands and lack the resources to protect their watersheds and treat their water to safe levels). That’s what bottled water is good for—a stopgap measure. But a wholesale retreat from tap water that meets federal safety standards is likely to end up hurting community water systems. People who drink only bottled water may be reluctant to accept rate increases or approve the bond issues that help pay for watershed protection, for upgrading treatment plans, and for repairing water infrastructure.

How can we know what’s coming out of our taps? The first step is easy: read your Consumer Confidence Report (it may be called a Water Quality Report), which comes in the mail with the water bill and tells you where your water comes from and if the utility has had any violations during the previous year. (If you don’t get a bill, you can see the report online. Keep in mind, however, that if you drink from a private well, you’re on your own; the EPA recommends testing your water annually.)

True, utilities aren’t required to test for chemicals beyond the 91 regulated under the Safe Drinking Water Act (you can find them listed here), but if you have cause for concern—based on your health status or potential polluters in your watershed—you should contact your state department of health for the name of an accredited lab and prepare to spend some money. Basic water tests start at about $50: the more contaminants you look for, the higher the price tag.

And how, exactly, do you know what to test for? Thanks to passage of the Emergency Planning and Community Right to Know Act of 1986, it’s relatively simple to learn what hazardous and toxic chemicals are stored, and discharged, in your region. You can visit this EPA website to find things like the Toxics Release Inventory and other wonky databases.

What if you don’t like what you learn? You may, like so many West Virginians, start hauling water from stores or have big jugs delivered to your door. But how long are you going to keep that up, considering the cost? A far better alternative is to buy a good on-tap filter or a reverse osmosis unit (which must be plumbed under your sink). An on-tap filter runs about $30, and replacement filters cost the same; reverse osmosis units start at $150. Sure, it’s an investment, but drinking just a liter of even the cheapest bottled water a day is going to run you over $1,000 a year.

Finally, let’s keep it all in perspective. The West Virginia spill was inconvenient and scary, and we might not know the true extent of its health impacts for some time. But it’s important to keep in mind that breaches in municipal water supplies are relatively rare. And maybe we should give thanks to the army of water technicians, chemists, and engineers who help utilities deliver safe and tasty water to 85 percent of the U.S. population 365 days a year (the rest drink from private wells). Their important work goes largely unheralded—until something goes terribly wrong.