DMX beating up George Zimmerman? Vigilante justice I could get behind

If only Trayvon's killer weren't to prosper from the fight, I'd celebrate this vile spectacle over his acts so far 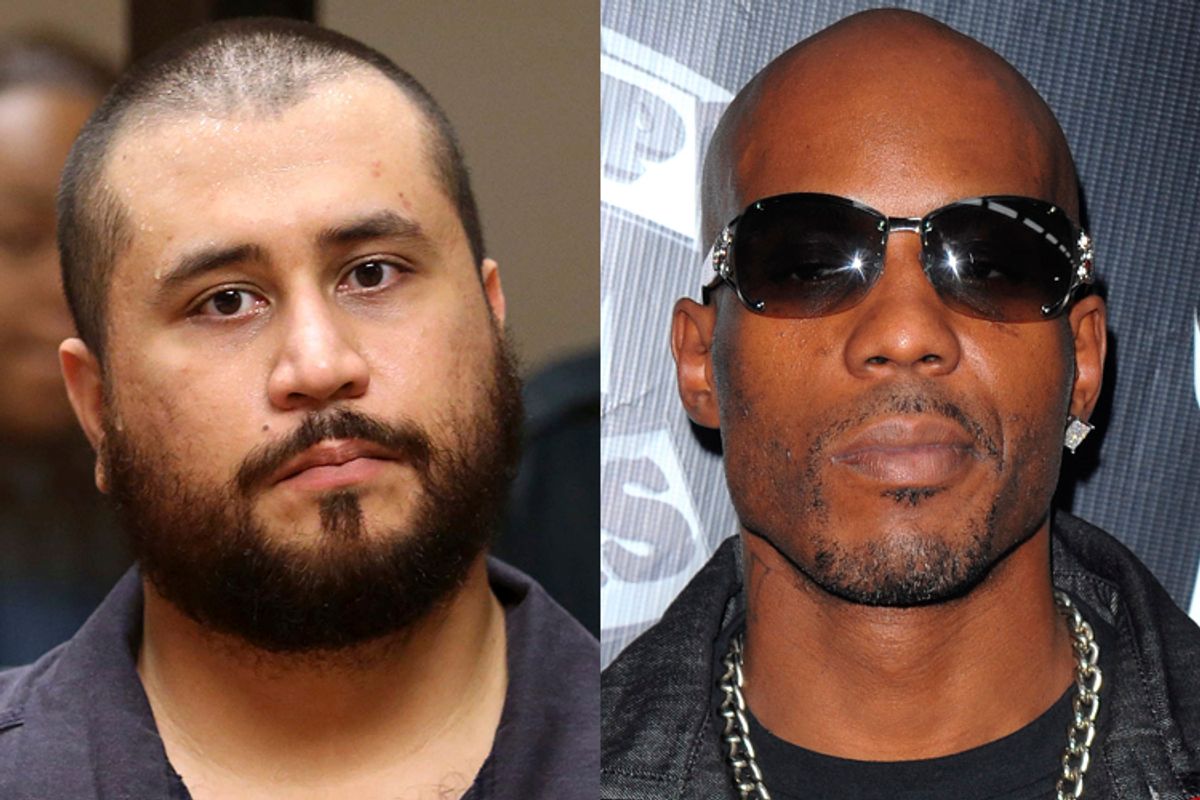 There are good reasons why we should not watch George Zimmerman's celebrity boxing match with rapper DMX. Chief among them is the inevitability that Trayvon Martin's killer will benefit in some way from the spectacle. Any possibility that Zimmerman garner financial, celebrity, social or empathetic capital is likely not worth entertaining. And certainly, a man as bluntly calculating as Zimmerman -- a man who calls the police ahead of time to deflect narratives of domestic abuse and murder -- would not step up to the ring with nothing to personally gain. What if in some sicker turn of already sick events, Zimmerman actually defeats DMX? As Olivia Cole commented, "Do you really want to watch George Zimmerman win with a loaded deck? Again?"

But I'm confident I'm not alone in my gut response to DMX's announcement that he plans to beat Zimmerman to a pulp and then urinate on his face. Namely: Bring on the thunderdome!

The society of the spectacle, as Guy Debord warned in the late '60s, is well established. And a cheap analysis would cry foul at the state of spectacle reflected in a celebrity boxing match between a killer and a rapper. Even the fact of Zimmerman's "celebrity" has an air so atrocious you'd be forgiven for thinking we're finally watching the fall of Rome: Capitalism's internal contradictions must now be driving toward its collapse. Or, at the very least, the seven horsemen are saddling up for the apocalypse. This is the way the world ends, not with a bang but with a rap star urinating on a killer on television.

Yet there is nothing newly spectacular here. At least not in the sense Debord intended. The theorist noted that "The spectacle is not a collection of images, rather, it is a social relationship between people that is mediated by images." And is the social relationship between the viewer of a Zimmerman-DMX fight or the observer of Zimmerman in the news media much different in terms of ethical preference?

There is nothing more spectacular in watching a rightfully furious rapper punch up (but, of course, safely: this is entertainment, ladies and gentlemen) Zimmerman than there is in watching Zimmerman walk free from his murder charges. Nor is there anything more spectacular in the fight than there is in hearing Zimmerman's sick 911 call, declaring his girlfriend crazy after he'd threatened her with a gun.

All the spectacles here -- the fight, the news stories and the criminal justice system -- are equally divorced from the enactment of the work that needs to be done in the world to rid it even of the possibility of men like George Zimmerman. You may call me a sick participant in a sick world in baying for Zimmerman's blood in some sort of Hunger Games-style televisual bonanza. But this is a sick world indeed, reflected in an infirm justice system that sees Zimmerman walk free and armed again and again; reflected in a world in which Zimmerman can garner fans, while young black skin is treated as a criminal threat. A world in which a black teen can go out to buy some Skittles and an iced tea and be shot dead en route home.

Trayvon Martin's death was a case of vigilante injustice. Formal justice then took 46 days to even intervene by putting Zimmerman in cuffs. Formal justice deemed Zimmerman innocent. DMX's vow to leave Zimmerman bloodied, broken and urine-soaked -- albeit unlikely to materialize -- is another promise of vigilantism, but there is a justice to it; a justice perhaps appropriate, maybe even preferable, to whatever vile social order deems the killer a "celebrity."