News this week of a man washing ashore in the Marshall Islands is the subject of dispute. These guys are legit 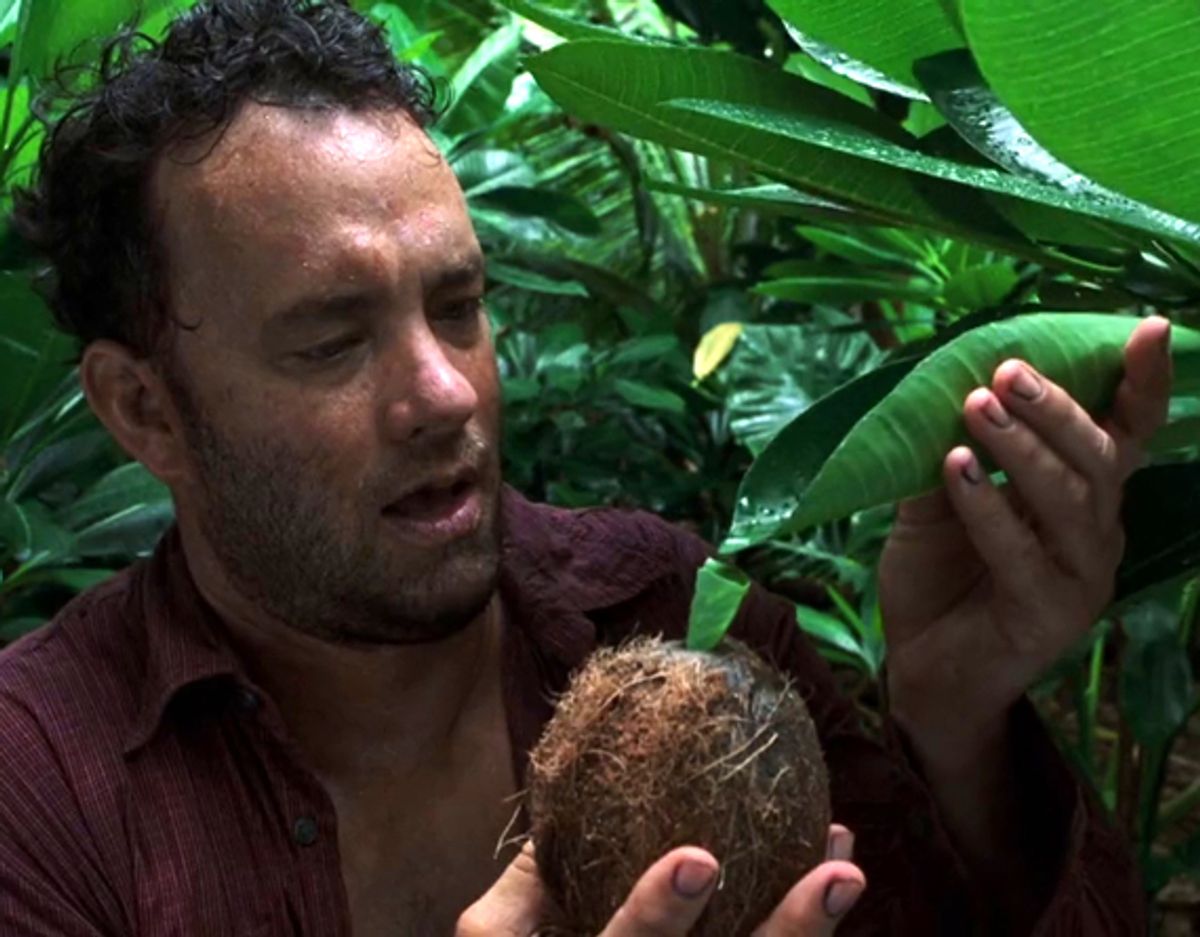 The news this week of a castaway washing ashore in the remote Marshall Islands is the stuff of fiction. And actually Jose Salvador Alvarenga's story very well may be.

Hard to say. He claims to have gone out shark fishing one day in December 2012, when his boat blew off course. The companion he was with died shortly thereafter, and for 13 months Alvarenga says he survived by eating fish he caught with his bare hands and drinking turtle blood when there was no rain.

However, more than one official has cast doubt on the fisherman's story. He looks pretty darn good for having been stranded at sea for 13 months, they say.

You be the judge.

Anyway, clearly the guy has been through some ordeal. A beard like that doesn't just grow itself.

But the news does call to mind previous individuals, who were all — either by their own volition or not — cast away. Some were teenagers. Some were in Siberia. Some lived to tell about it, and some did not.

Here are their stories:

So the real-life Robinson Crusoe was most likely a Scottish man by the name of Alexander Selkirk, who did fend for himself on a deserted island for four years but who also wound up there more of his own volition than as a result of any shipwreck.

In October 1704, Selkirk was on the crew of a ship called St. George when it stopped at the archipelago of Juan Fernandez, west of Chile. Selkirk thought the ship was in bad shape and said he'd rather be left on Juan Fernandez than continue on in a vessel that wasn't seaworthy. Well, that's what he got. The captain left him ashore with some clothing, a musket, some tools, a Bible and tobacco.

At first, he sat and read his Bible, pretty sure another ship would be by soon ... four years and four months later a friendly ship finally crossed his path (two Spanish ships showed up before then, but he didn't trust them). In the meantime, he ate feral goats and steered clear of sea lions in heat. He built a couple huts and munched on wild turnips.

Today, the island he lived on has been renamed Robinson Crusoe (pictured above). A nearby island that he likely never set foot upon has been christened Alexander Selkirk.

The tale of Hasenbosch isn't a happy one. As punishment for sodomy, the Dutchman was abandoned on Ascension Island in the South Atlantic in 1725. He kept a diary, from which we know that he began his stay on the island with a tent, seeds, a month's worth of water, books, writing materials and even extra clothes. But when his water ran out, Hasenbosch was at a loss to find a freshwater source. He took to drinking turtle blood and his own urine to stay hydrated. He likely died after about six months; British sailors discovered his abandoned tent and diary in January 1726.

The story becomes all the more tragic once you find out that there are actually two sources of fresh water on the island, one of which allowed the entire crew of the HMS Roebuck to survive a shipwreck for two months in the early 1700s.

In 1542, French explorer Jacques Cartier led a voyage to Newfoundland. Marguerite de La Rocque, then 19, and her uncle were among those who accompanied him. During the voyage, Marguerite began sleeping with another man. Her uncle, apparently taking the moral high ground, booted them both off the

ship. They were marooned on the “Isle of Demons” (now called Harrington Island) near the Saint-Paul River in Quebec.

It's unclear exactly how long Marguerite survived, but long enough to get pregnant, have a baby, watch her baby and her lover die. She survived by hunting game and living in a cave until she was rescued by Basque fishermen and taken back to France. All said, she was probably marooned for around two years. She told her story to the Queen of Navarre, which is how we know about it today. Ultimatley, she became a schoolmistress, and settled in Nontron, France, living in Chateau de La Mothe pictured above.

Think being shipwrecked is tough? Try being shipwrecked in Siberia. That's what happened toAda Blackjack, an Innuit woman who accompanied a group of men on their mission to claim Siberia's Wrangel Island for Canada in 1921. She was meant to be their cook and seamstress, but things got real bad real quick. Their rations petered out and hunting was difficult. One of the men came down with scurvy. Three of the other men set out across the ice to look for help on the mainland, leaving Ada and the ailing Lorne Knight behind.

The three were never seen again, but Ada cared for Knight until his death in April 1923. Then, for five months she survived by herself, trapping Arctic foxes and shooting birds, seals, even polar bears. On Aug. 19, 1923, she was rescued by a man hired by the former head of the expedition who had left her and Knight there, Vilhjalmur Stefansson. Ada eventually returned to the Arctic where she lived until the age of 85.

Most castaways are pretty excited when they get back home. Not Thomas Francis Neale. He wanted nothing more than to be on his island. This nutty New Zealander went out and voluntarily marooned himself on one of the Cook Islands in October 1952. A boat passing by Suwarrow Island in the South Pacific agreed to drop him off there, along with two cats and as many supplies as he could carry. The island had been uninhabited since WWII, but the people who lived there before had left chickens and pigs. Neale proceeded to hunt and eat the pigs, and domesticate the chickens.

He was getting along well, actually, until May 1954 when he hurt his back and hitched a ride to Rarotonga, the largest Cook Island, to seek medical attention. He married and had two kids, but could never stop dreaming of his island. He returned in 1960 for another four years, leaving again once pearl divers began to invade the area. His last stint at the island started in 1967 and lasted 10 years. In 1977, a yacht found him ill, and took him back to Rarotonga where he died of stomach cancer eight months later.

Narcisse Pelletier was just 14 when he was abandoned on eastern Cape York Peninsula in Australia. He had been serving as a cabin boy on the Saint-Paul, a ship that set off from Marseilles with wine for Bombay, where it picked up Chinese laborers bound for Australian gold mines. Apparently, rations were running short, so the captain opted for a quicker, more dangerous route to Sydney. The ship struck a reef in Papua New Guinea in 1858.

Some crew members were attacked when they sought refuge at nearby Rossel Island. Those who survived jumped in a long boat and paddled away as fast as they could. Almost two weeks later, the crew made it to an island, where they found fresh water. Apparently wanting one less mouth to feed, they abandoned Pelletier there. Three Aboriginal women found him. They ended up adopting him, giving him the new name "Amglo."

Otokichi, a Japanese national, was also 14 when the ship he was on blew off course in 1832. Luckily, the ship was transporting rice, so for the 14 months it drifted along, the crew was able to sustain itself. By the time the ship drifted ashore on Washington's Olympic Peninsula, however, only three of the 14 original crew members were still alive, including Otokichi. The men were found by the Makah Indian tribe and were briefly enslaved before being handed over to the Hudson Bay Company.

Juana Maria, better known to history as the Lone Woman of San Nicolas Island, was a Native American belonging to the Nicoleño tribe. After Russian otter killers invaded San Nicolas Island in 1835 and slaughtered most of the Nicoleño people, missionaries came and took the remaining tribespeople back with them to live at the San Gabriel Mission in California — all except Juana Maria.

Eighteen years later in 1853, a sea otter hunter named George Nidever found her living in a hut made of whale bones and surviving on dried seal blubber. She was taken to the Santa Barbara Mission and reportedly was fascinated by everything surrounding her. Eventually Nidever brought her home to live with him and his wife, but just seven weeks later she contracted dysentery and died. The name Juana Maria was given to her by missionaries; her native name is unknown.

After being captured by pirates in 1722, Philip Ashton somehow escaped their clutches and hid in the jungle of Honduras' Roatan Island until they gave up looking for him and sailed on. Ashton had escaped with nothing but the clothes on his back, and so for a time he ate only fruit. As chance would have it, he happened across another castaway. They were great friends for three days, until the unnamed man went out for food and never came back. He did, however, leave behind a great stash of gunpowder, knives and tobacco, which allowed Ashton to start killing tortoises and cooking them. He was rescued by a ship from New England shortly thereafter.