Anatomy of an economic debacle: How the Fed proposed bailing out Mexico to pass NAFTA 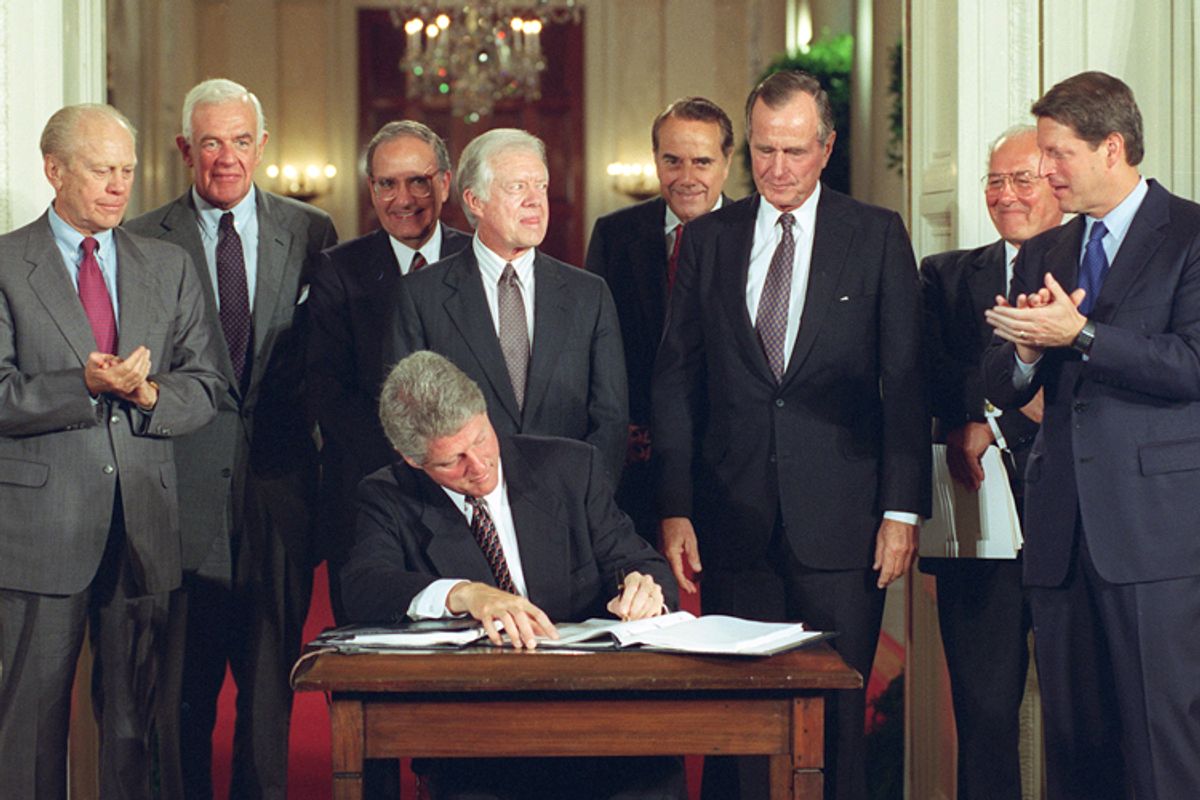 The Federal Reserve is supposedly an independent central bank, that we're told is above politics. By this telling, it is supposed to be staffed with ramrod straight central bankers, tight-fisted but apolitical. While the Fed can state its opinions on policy matters when asked by Congress, it isn't supposed to use its power to manipulate the political system. And it isn't supposed to propose bailing out a foreign country just to get the United States Congress to change policy.

But in 1993, that is exactly what the Federal Reserve did.

On Sept. 28, 1993, Jon LaWare, a member of the Federal Reserve Board of Governors, testified before the House Banking Committee in support of the North American Free Trade Agreement, or NAFTA. "I want to make clear that the Federal Reserve supports NAFTA without qualification," he said, discussing throughout the hearing how NAFTA would help American banks penetrate the Mexican financial system. LaWare, like other regulators testifying at that hearing (including Mary Schapiro, then-head of the SEC before returning to the job under Obama), was pressing the agreement aggressively. The Federal Reserve has, broadly, two reasons to press trade agreements. One, the Fed wants lower labor costs, which reduces inflation. Shipping jobs abroad makes the Fed's job easier. And two, U.S. banks, which are the regulatory customers of the Fed, wanted to get their hands on the Mexican banking system (which they eventually did).

LaWare lobbied hard. He bragged about the U.S. trade surplus with Mexico, arguing that the last several years of NAFTA-like trade liberalizing had helped the U.S. penetrate the Mexican market. He told skeptical members of Congress that NAFTA would let American banks own Mexican subsidiaries, offer mutual funds and broker products. Would it risk American capital markets? No, of course not. Would NAFTA jeopardize the Community Reinvestment Act (a question asked by Mel Watt, now the head of the agency that runs Fannie and Freddie)? No way. Would NAFTA help Mexican drug traffickers? "Our analysis indicates just the contrary," said LaWare, as if the Federal Reserve had deep expertise in drug smuggling.

But what he didn't mention is that Mexico was undergoing a currency crisis. And such a currency crisis, were it to happen on the eve of the NAFTA vote, would prove free trade skeptics right. A weaker Mexican peso would show members of Congress that jobs would be outsourced with lower trade barriers, and that trade with Mexico would become a net drag on GDP. Ross Perot's argument about "a giant sucking sound" would be proven right, just before the critical vote.

It was essential to delay such a crisis. Just a month and a half later, on Nov. 9, the Federal Open Market Committee, the secretive group that makes interest rate decisions, decided to ready a bailout of the Mexican peso so that the U.S. Congress wouldn't vote down NAFTA. FOMC transcripts are released on a five-year lag, and by 1999, NAFTA was old news. But if you look at the Nov. 9, 1993, conference call, which is now online, you'll see some remarkable conversations in which Fed officials explicitly said they were bailing out the Mexican currency with loans to Mexico so that NAFTA would pass. The relevant part is between Fed chairman Alan Greenspan, Fed governors Wayne Angell (an economist and later managing director for Bear Stearns) and Edward Kelley (a Texas banker), and Fed official Richard Syron (who later ran Freddie Mac when it went bust).

You can see these men having a conversation in which they discussed their abhorrence of bailouts and intervention in the market ... except when intervention would get them something they wanted. As Syron put it, "like a lot of people I am very skeptical, I must say, of intervention in many cases." But this case, where NAFTA was at stake, was "extraordinarily political." Because of that, it's not "the same same as supporting ordinary intervention in markets." Angell and Kelley were even more aggressive about the reason to intervene: A weakening peso might show that the American trade surplus with Mexico could disappear if NAFTA were enacted, and therefore increase pressure on Congress to reject the agreement.

Nothing formal came out of this FOMC  meeting, though the participants allude to having conversations with Mexican banking officials on the possibility of a credit facility. The very next day, the Mexican stock market skyrocketed, and the crisis seemed to abate. The FOMC then convened to discuss "a short-term credit facility [for Mexico] designed to deal with the run up to the NAFTA vote and the immediate aftermath." It wasn't necessary. The crisis had been averted.

Today, one of the key pivot points over trade negotiations with the Asia-Pacific and European Union regions is currency manipulation provisions. Members in 1993 were concerned about this during the NAFTA negotiations as well. They had held hearings on the possibility of Mexico devaluing its peso, with one hearing in 1993 titled “NAFTA and Peso Devaluation: A Problem for U.S. Exporters?” Several inquired as to why NAFTA didn’t include currency or monetary issues within its scope, but they were told not to worry, and enough of them chose to go ahead and vote for the agreement anyway. Had they known that the Federal Reserve was ready to bail out the Mexican peso just to get an affirmative vote on NAFTA, history might have looked very different.