Big Brother gets the gold! How Putin gave the Olympics a totalitarian makeover

Reports of spying on hotel bathrooms should come as no surprise. This was Russia's plan all along 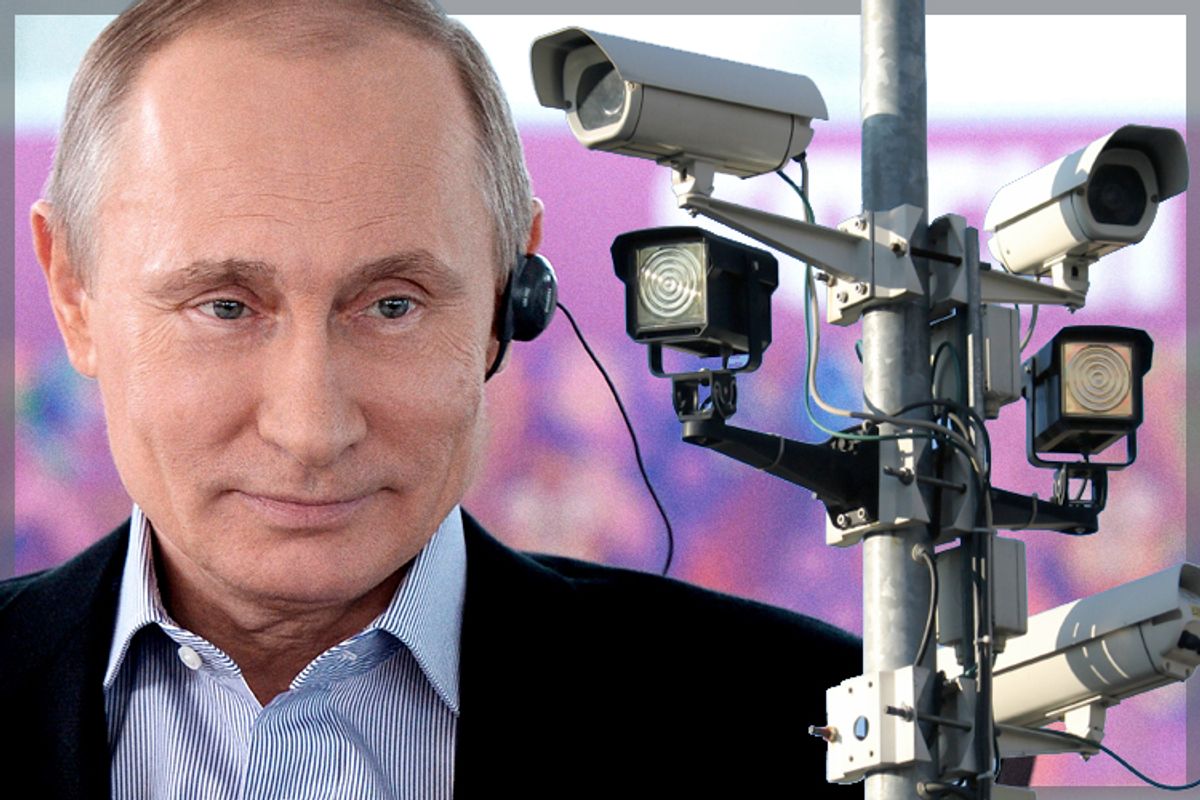 Russian President Vladimir Putin wasn't joking when he declared that the Sochi Olympics would be surrounded by a "ring of steel." It only seems fitting: The year of the surveillance state had to include a "surveillance Olympics." If we're awarding prizes for best impersonation of a dystopian cyberpunk future, Sochi gets the gold.

A travel advisory "Security Tip" from the U.S. Computer Emergency Readiness Team warned Americans -- whether on their way to Sochi, or even just looking up medal results online -- of potential dangers from both "hacktivists" looking to capitalize on the Olympic spotlight, and Russian authorities liable to treat encrypted communications as crimes against the state.

It probably seems hypocritical, or just fatally ironic, that the U.S. government believes "it is important that [Sochi] attendees understand communications while at the Games should not be considered private." But consider this: Russian law explicitly gives the government's Federal Security Service (FSB) the power to "monitor, intercept, and block any communication sent electronically." In the U.S., civil libertarians are upset at massively unwarranted surveillance overreach. But we've got it easy: Sochi is the equivalent of a giant billboard hung over the Information Superhighway, warning us that things can get much, much worse. Russia's clear case of "Great Firewall of China" envy achieves what many of us -- post-Edward Snowden -- might have considered impossible: It makes the NSA look cuddly.

The Sochi Olympics are Vladimir Putin's baby. He personally chose the site, and he's made it clear that the event is designed to promote "a strong and modern Russia." Early returns suggest that Putin's most cherished goals may be tough sledding. But there's one thing he has achieved without question: The Sochi Olympics are a gut check for our wired future, an opportunity to ask ourselves the question, Is this kind of lockdown a preview of the road ahead -- where totalitarian control is rendered easier and more complete by modern surveillance technology -- or the last gasp of a flailing, ancient regime?

How in the world did we get here?

Way back in the dawn of Internet time, the prototypical cypherpunk John Gilmore etched his name permanently in the annals of cyberlibertarian utopianism by declaring that "the Internet treats censorship like damage and routes around it." From this premise forward, the Internet was supposed to relentlessly and inexorably undermine the power of the state.

But in 2014, Sochi is a glaring affront to anyone who still has faith in the liberating potential of the Internet. On the one hand, we've learned to our dismay how digital technologies have enabled and facilitated a comprehensive surveillance state. And on the other, authorities everywhere are seeking to match those new surveillance powers with enhanced measures of control.

The cypherpunks -- advocates of strong cryptographic protections who were warning about the NSA when Edward Snowden was in diapers --  definitely got one thing right: The chaos and anarchy of free expression on the Internet does pose a threat to totalitarians of any stripe. Otherwise, they wouldn't be working so hard to co-opt or quash it.

Civil libertarians and international journalism organizations have been sounding the alarm bell about Russia's increasingly determined efforts to control the Internet for at least the last two years. The Russian investigative journalists Andrei Soldatov and Irina Borogan have industriously documented a relentless effort to clamp down on anything that can be construed as "extremist," including even "offending religious beliefs or feelings." The tightening of the reins has proceeded with all the grim efficiency of a boa constrictor squeezing the life out of a goat.

A registry of banned websites has existed since at least 2012. Russia's "System of Operative-Investigative Measures" (SORM) has given the Russian FSB legal authority to monitor, intercept and block any communication sent electronically for well over a decade. But in 2013, all mobile networks in Russia incorporated "deep packet inspection" (DPI) technology that facilitates extraordinarily granular surveillance and control capability. On the scale apparently implemented in Russia, DPI is an NSA spook's fantasy come true, giving the state the power to filter and disrupt individual communications in real time. In theory, then, any efforts to organize, say, a gay rights protest in Sochi could be squelched automatically by SORM's filters.

Ron Deibert, a professor at the University of Toronto and director of Citizen Lab, which co-operated with the Sochi research, describes the SORM amendments as "Prism on steroids", referring to the program used by the NSA in the US and revealed to the Guardian by the whistleblower Edward Snowden. "The scope and scale of Russian surveillance are similar to the disclosures about the U.S. program but there are subtle differences to the regulations," says Deibert. "We know from Snowden's disclosures that many of the checks were weak or sidestepped in the U.S., but in the Russian system permanent access for SORM is a requirement of building the infrastructure."

According to Soldatov and Borogan, the Kremlin's campaign to control the Internet is a direct consequence of the "Arab spring." Fearful of the possibility that "hacktivists" in the Islamic belt of Russia might attempt to follow the example of protesters in Egypt, Tunisia and elsewhere, Russian authorities have become paranoid about the role social networking could play in mobilizing resistance. Backlash against the Arab spring is just one more example of how the Internet itself has paved the way for its own taming.

Another unexpected irony of Internet evolution is that technologies of surveillance and control were, in large part, developed by the private sector, in order to deal with bad actors who were using the  Internet in ways that inconvenienced everybody. As Stanford's Jennifer Granick, an expert in civil liberties at the Center for the Internet and Society, has pointed out, the challenge of beating spam required reining in the Internet. A tool that was supposed to help democratize authoritarian-regimented societies ended up becoming just another cudgel in the hands of the oppressor.

Network problems like unwanted spam and malware have encouraged providers to develop tools that can analyze and disrupt traffic. The economic consolidation of network providers and entertainment companies has encouraged conglomerates to look at favoring and disfavoring – essentially blocking – certain content or applications on their networks. Some countries are now asking these providers to block access to certain content, or to collect transactional data about users’ Internet access for subsequent monitoring and potential prosecution.

This is "damage" that the Internet did not route around. This is damage that led directly to the brakes being applied; and worse, to the construction of a surveillance and control infrastructure that dwarfs anything that existed before the first emails started winging their way through cyberspace. The fact that Russia's FSB can listen in on the communications of every single visitor to Sochi is a body blow to dreams of liberation.

Even in China, where the government has put in more effort than any other nation on the planet to suppress free expression on the Internet, Chinese netizens have come up with endlessly creative ways to route around the Great Firewall. Meanwhile, Russia's plans to monitor Internet usage at Sochi have instigated endless coverage around the world, thoroughly undermining Putin's effort to use the Olympics to flaunt Russian progress.

Even as we mull the unpalatable implications here for the future of free and untrammeled discourse, there's still no getting around a paradox. Should anything actually happen at Sochi that doesn't fit into the triumphal narrative of Putin's Russia -- an act of athletic gay-power liberation on the medal stand, à la Mexico City's iconic black power salute; or, less inspiringly, a terrorist incident tied to Russia's Islamic unrest -- is there any doubt that news of it will rocket around the world in nanoseconds, or that the frenzy of social media commentary will out-shout even the most stentorian autocrat. The surveillance Olympics will be fascinating to watch, because even now, it's just not clear whether the censors can prevail in the long run.

The most hopeful narrative that one might wring out of Sochi is this: "Control" is a mirage, no matter how bloodily it is imposed. Pussy Riot could still be right: "The truth will always win, even if it dies in battle."