Is the literary world elitist? 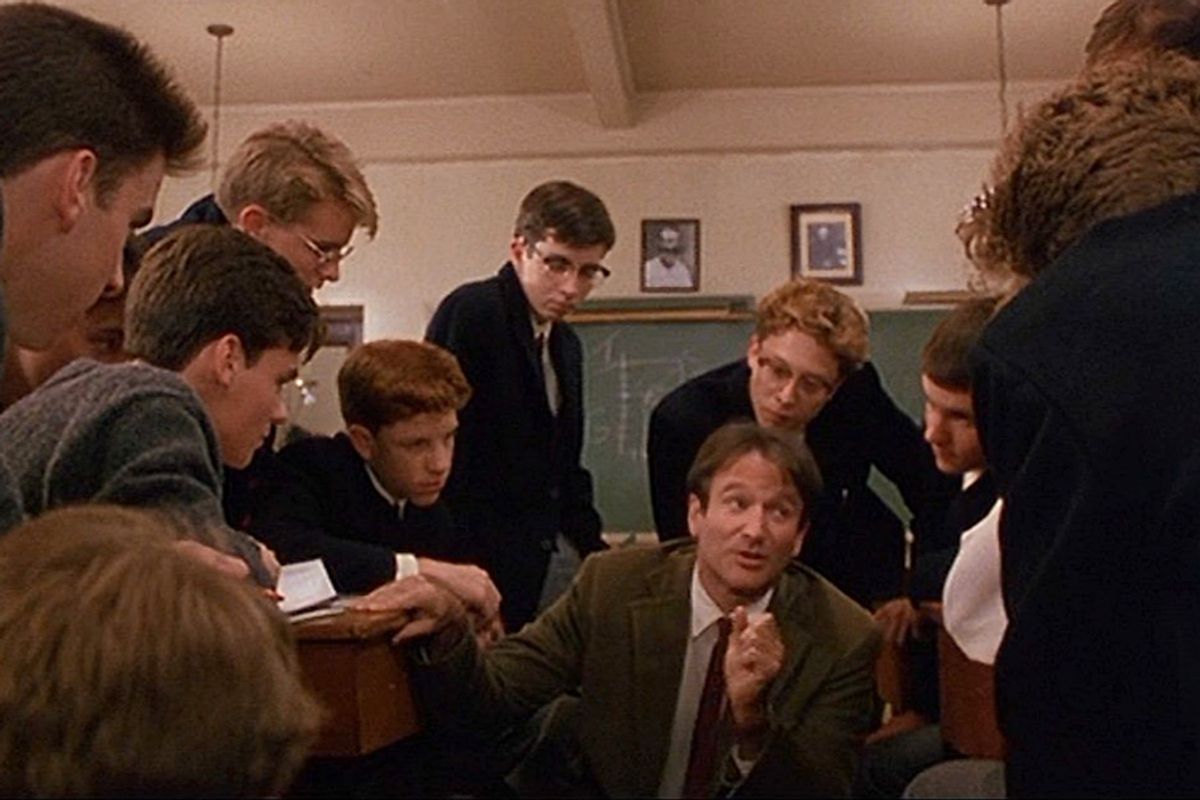 "The machine of consumerism is designed to encourage us all to believe that our preferences are significant and self-revealing; that a taste for Coke over Pepsi, or for KFC over McDonald’s, means something about us; that our tastes comprise, in sum, a kind of aggregate expression of our unique selfhood." Eleanor Catton's essay about elitism in literature would be indelible for that one beautifully articulated observation alone, but the rest of it is pretty brilliant, too.

Catton, author of the Booker Prize-winning novel "The Luminaries," was prompted to write it by a complaint from a fellow Kiwi about an article on the Paris Review website. The reader objected to the writer's use of the word "crepuscular," condemning the piece as "elitist" for that reason. Catton's essay (which originally appeared in New Zealand's Metro magazine last spring and was reposted in December) treats the reader's ire as a symptom of the creeping consumerist attitude in our response to literature. That attitude includes the desire to be pleased, catered to and flattered by the products we consume and the companies who supply them, and an increasing intolerance of cultural experiences that make any demands on us.

I agree with Catton on almost every point. I've encountered a good bit of this mind-set among readers I've met, as well as where Catton found it in abundance: in Amazon customer reviews. But I also think Catton misses something important about the gripe that initiated her essay. The reader who found a writer's use of "crepuscular" to be elitist wasn't just annoyed at stumbling across a word he didn't recognize and being made to take the trouble of looking it up. As Catton herself points out, when you're reading online, the definitions of words are extremely easy to get. It seems doubtful the reader was, as Catton seems to think, put off by the "inconvenience" of this. Rather, I surmise, he was angry because the Paris Review piece made him feel ignorant.

Another reader, also unfamiliar with "crepuscular," might have reached the same point, invoked the digital dictionary and thought, "Cool. New word!" Learning something -- including new and potentially useful words -- is one of the reasons people read, after all. To decide instead that the appearance of the word "crepuscular" is the writer's way of signaling that only people already fully conversant with all the synonyms for "shadowy" need apply to the select society of his blog post (and the rest go hang themselves!) is quite a leap. In truth, the only way an encounter with a strange word can make you feel ignorant is if you already fear and suspect that you really are ignorant.

Intellectual insecurity is, alas, a pervasive problem in the literary world. You can find it among fans of easy-to-read commercial fiction who insist (on very little evidence) that the higher-brow stuff is uniformly fraudulent and dull, and you can find it among those mandarin bibliophiles who dismiss whole genres (on equally thin evidence) out of hand. One of the favorite gambits of people secretly uncertain about their own taste is identifying some popular book of incontestably lower quality than their own favorites and then running all over the Internet posting extravagant takedowns of it and taunting its fans. Yeah, I'm not crazy about "Fifty Shades of Grey," either, but I'm not going to invest that much energy in proclaiming this sentiment to the world. To do so suggests you're less interested in championing good writing than you are in grabbing any chance to feel superior to somebody else.

A teacher, a parent, a romantic partner, a friend, a roommate, even a co-worker has made them feel ashamed over a book or genre of books they enjoy or admire. They were told to put away the comics or teased for de-stressing with a romance novel on coffee break. Or, conversely, they might dream of being included in some tony, brainy (and possibly entirely imaginary) community of letters while at the same time worrying that they won't make the grade. There are those whose fantasies of leading a "literary" life largely involve having their own superior discrimination and erudition admired by other superior minds. The result of all this baggage is a preposterous, resentful pecking order in which readers get way too much pleasure out of pissing on other readers' preferences and/or jumping, on the slightest pretext, to the conclusion that their own are being ridiculed.

Catton does have a dog in this fight. She wrote a long, complex, moderately challenging and critically acclaimed novel, one that has gone on to garner its own share of bewildered and testy Amazon reviews. Perhaps anticipating these, she laments the thinness of the one-star reviews attached to similar titles, responses that strike her as depressingly similar, reducible to "(1) this book was confusing; (2) this book was boring; and (3) this book was badly written." None of these objections are engaged or expressive enough to constitute real criticism, Catton maintains, and when she finds a review that amounts to "If I had understood/enjoyed/been interested in this book, it would have been better," she confesses that she is "always tempted to reply: 'If you had understood/enjoyed/been interested in this book, you would have been better.'"

True: We're all better for having understood and been interested in a work of art than otherwise. Part of what Catton defends here is the often unacknowledged creativity and collaboration involved in the art of reading. And yes, you do often get more out of reading a book when you put a lot into it, which is what distinguishes reading from consuming a product. But not always, and just because a reader isn't able to articulate why a book has failed her doesn't mean that she didn't give it a decent try. Some difficult books really aren't worth the effort.

You can see why rudimentary reviews like "Maybe the rest of the book has some merit but I had to stop reading because it was so tedious and seeming to take too long to go anywhere" (from an Amazon review of "The Luminaries") would annoy an author like Catton. Her novel (which I loved), is a work of immense consideration, and the response in this instance is so lazy, slapdash and indistinct -- not to mention ungrammatical. Why even bother to write a review if you have so little to say? Why try to rate a book according to a star system as if it were a blender or deodorant? This seems, as Catton memorably puts it, as "hopelessly beside the point as giving four stars to your mother, three stars to your childhood or two stars to your cat."

But I think that Catton underplays the degree to which our relationship to any given book is also a relationship to its reputation -- which is just another way of saying a relationship to everyone else's relationship to the book. We know it was well-reviewed, that our smart friends praise it, that it won a prize. But let's say this celebrated book really, really doesn't work for us. Perhaps we simply shrug our shoulders and move on because life is short and there's so much to read and so much joy to be had from reading other books. But if we happen to be less sure of ourselves, less comfortable with the stubborn vagaries of taste and a lot more defensive about our own judgments, we might feel compelled to protest that all the acclaim heaped on this alleged masterpiece is a hoax -- and, for that matter, so is the whole rotten system it came out of.

To make it personal: I can't, for the life of me, tell what people see in "The Adventures of Augie March." I'm not even interested enough in it to explain why I find it tedious, but I feel about it the same way that Amazon reviewer feels about "The Luminaries." I'd never, however, assert that the novel has no merit. Obviously it does to many, many people, some of whom are smarter and more discriminating than I am (and also some of whom are not). I certainly don't hold the novel and those who love it in contempt. No doubt, as Catton would have it, I have failed this book, rather than the other way around. I'm also fortunate enough not to fear that such a failure proves me an ignoramus and vulgarian (even if I did also enjoy those horribly written Stieg Larsson novels). You can go ahead and call me those things, Saul Bellow fans, but fair warning: I'm not going to agree with you.

If, however, I did fear, deep inside, that my inability to appreciate any celebrated book betrayed my complete intellectual and aesthetic inadequacy, I would probably be pretty angry. I'd feel the need to stick my oar in and announce that "The Adventures of Augie March" is actually a crap novel, that it is objectively boring and that the critics who praise it are charlatans. Even if I couldn't explain exactly why I dislike it, I might want to register that dislike because somebody should be speaking out against this hoax being perpetrated on the public by the literary establishment. I'd resent that establishment and the snooty, Bellovian way it expresses itself, with fancy words like "crepuscular." And I'd want everyone else who, like me, could see through this emperor's new clothes to know that they are not alone, and get them to tell me I'm not alone. It's usually those with the least faith in their own opinions who become the most outraged when the consensus does not agree with them.

If I did feel that way, it also probably wouldn't be my fault. If I had such attitudes, chances are it would be because at some early -- or even later -- stage in my life, someone with similar anxieties would have taken them out on me and made me feel small and stupid and tacky. And to make myself feel better, I might do something similar to someone else: for example, mock my little brother for reading George R.R. Martin. Petty abuses like this get passed on in pretty much the same way the bigger ones do. All the same, even if we're not to blame for our insecurities, we are responsible for recognizing them for what they are. And for growing up and getting over it.