Meagan Duhamel and Eric Radford dazzle with a "back inside death spiral," and more from the 2014 games 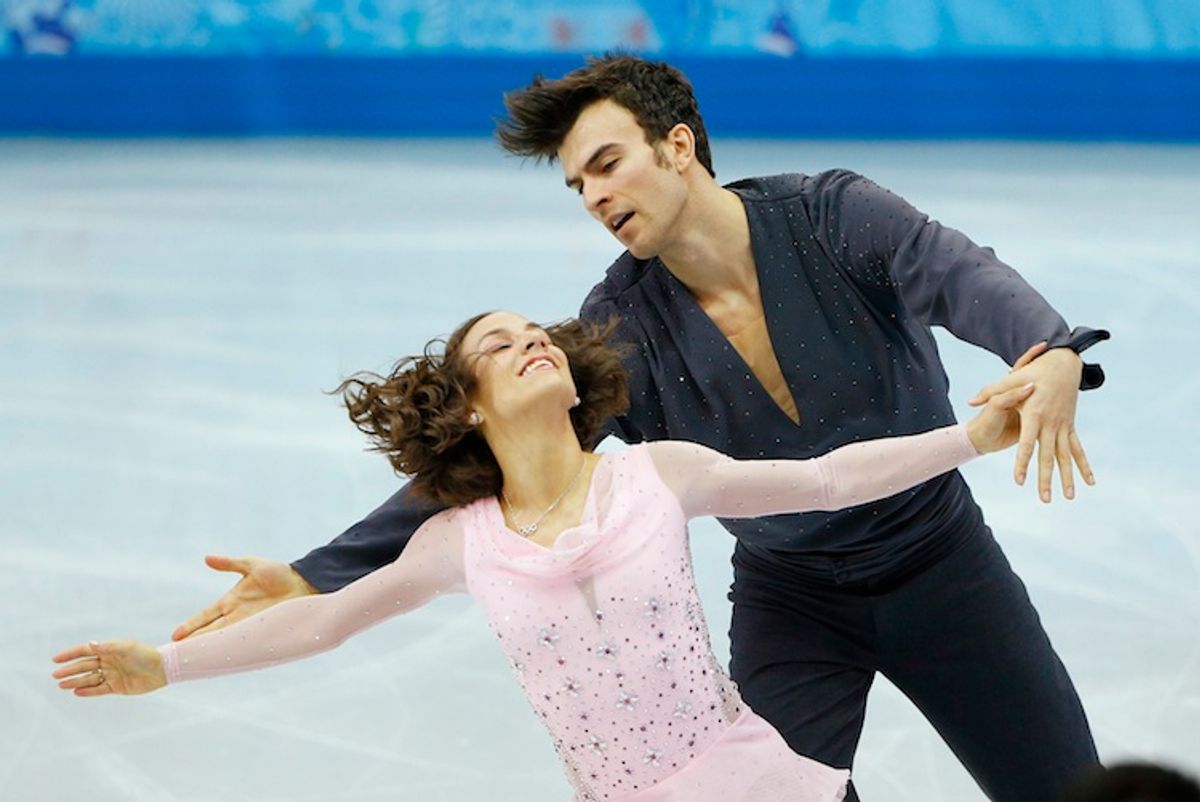 To be clear, right upfront: The events broadcast during Thursday’s prime-time coverage did not involve the awarding of any medals. With the official opening ceremony not happening until Friday, these were all qualifying and early-stage competitions, the Olympics equivalent of  NCAA Tournament play-in games. In other words, if there was one night when it was OK to say, “Oh, shit. I completely forgot to watch the Olympics,” last night was probably that night.

Bob Costas kicked things off by broadcasting live from an ice-diamond desk in the luxury situation room on planet Hoth. (Or so it looked.) In his opening remarks he noted that NBC’s coverage will involve things like figure skating and snowboarding, but also will address questions about Russian “policy differences, security, cost overruns, and human rights issues, including Russia’s anti-gay propaganda law.” (Translation: NBC will tackle serious issues in addition to salchows.) Costas also noted that, with 12 new events added and nearly 3,000 athletes from 88 countries participating, this is the biggest winter Olympics in history. Last, and most important, Costas made sure the nation knew that he is suffering from a raging eye infection, a move that was clearly a preemptive strike against the potential Twitter hashtag #costasconjunctivitus.

Only three events were featured during last night’s coverage: figure skating (team competition); slopestyle, a new snowboarding event (men’s and women’s); and moguls skiing (women’s). Here’s a quick breakdown on each one:

A new addition to the winter Olympics roster, team ice-skating functions much the way team gymnastics does: with members of each country competing in various categories -- men’s singles, women’s singles, pairs and dance -- and the various scores being added to each nation’s running tally. By the end of Thursday’s prime-time coverage, the team standings looked like this:

And way down in seventh: USA! USA!

Key highlights: American Jeremy Abbott botched his performance, falling during his quad toe and looking pretty distraught afterward. The NBC commentators softened the blow by declaring his performance “disastrous.” That’s because, with the possible exception of Scott Hamilton, who delivers the most heartfelt “Awesomes!” in the business, figure-skating commentators are required to be blunter than your average irate blog commenter.

On a more positive note, Russian Yevgeny Plushenko skated beautifully to the “Tango de Roxanne” from "Moulin Rouge." Russian pair Tatiana Volosozhar and Maxim Trankov -- dressed like a bellhop and Cinderella in a short skirt -- were equally phenomenal. But I was most blown away by the Canadian duo Meagan Duhamel and Eric Radford. These guys: I mean, really. They did a move called a back inside death spiral, which I am afraid to type, let alone attempt on a world stage composed of slippery ice. At one point, Radford pulled Duhamel through his legs, flung her gracefully into his arms and cradled her as though she were a tiny, pink-outfit-wearing infant, a move that made the lift from "Dirty Dancing" look laughably remedial by comparison. Radford even composed the music for their performance, which I am pretty sure makes him the Clint Eastwood of figure-skating competitors. We should all keep an eye on these two.

What is slopestyle? Well, forgive me for using such technical terminology, but: it’s a snowboarding event that rewards people for flying and flipping into the air at extremely impressive altitudes, without breaking their necks.

If anyone does land badly and almost seriously injure a body part, rest assured: NBC will show the replay multiple times, as it did when Norway’s Kjersti Buaas experienced a gasp-inducing face- and body-plant during the women’s qualifying heat. Later on Twitter, Buaas assured the world that she was fine and had “only ruptured a muscle.” Olympic athletes, ladies and gentlemen: their “onlys” are what usually make the rest of us request extended medical leave.

As noted during the broadcast, Shaun White dropped out of the men’s event at the last minute so he could focus his attention on competing in the event that usually results in gold for him: the halfpipe, which I can’t say or think about without singing Weezer’s “Hash Pipe.” With White out of the picture, other slopestyle competitors finally got some attention, including: Jamie Anderson, the American leading the women’s slopestyle field and who, according to NBC, hugs a tree before every run (Psst: She’s actually the Lorax); Norwegian Staale Sandbech, whom I’ve decided to refer to, from here forward, as the Slopestyle Tim Riggins; and Canadian Mark McMorris, who was competing with a broken rib (according to a reporter, it only hurts when he coughs or laughs, so, you know, no biggie) and got a much lower score than he deserved after soaring to impressive heights during his trip down the mountain.

Key highlights: American Heidi Kloser injured one of her knees during a training run, before the qualifying event even began. While explaining what happened, reporter Carolyn Manno noted that, before being loaded into an ambulance, Kloser asked her parents: “Do I still get to be considered an Olympian?” It was Kloser’s first Olympic games, and she got knocked out before she even had a chance to compete. Just heartbreaking.

Once the moguls event began, it became obvious that no one who competes in this thing should have knees at all; watching these women bumpety-bump over those snowy mounds, even when they do it well, always looks brutal to me. Despite the brutality, past gold medalist Hannah Kearney was able to handle the moguls just fine, as were the other competitors, all of whom have the last name Dufour-LaPointe. OK, OK, not all of them: just three of them, who are sisters from Canada and advancing to the finals. That seems unfair somehow. Shouldn’t there be a cap on the number of siblings who can compete in the same event, perhaps in the form of something called the Brady Bunch Law?

Night one of Olympic coverage closed with Meredith Vieira’s interview with opening ceremony production designer George Tsypin, who discussed the work he’s been doing to prepare for Friday evening’s big moment of Russian pageantry. Tsypin, who is Russian but lives in New York, has worked on a number of projects, including "Spider-Man: Turn Off the Dark," which is how you know the opening ceremony will be impressive as well as completely devoid of lawsuits involving Julie Taymor. Well, probably. Seriously, to those of you performing on Friday in the big, super-official kickoff to this Sochi sporting extravaganza: good luck. And may the odds be forever in your favor.