"The Great Beauty" director Paolo Sorrentino: "An Oscar is something that awakens national pride"

The director of Italy's big Oscar hope talks to Salon about Fellini, non-Italian audiences and politics 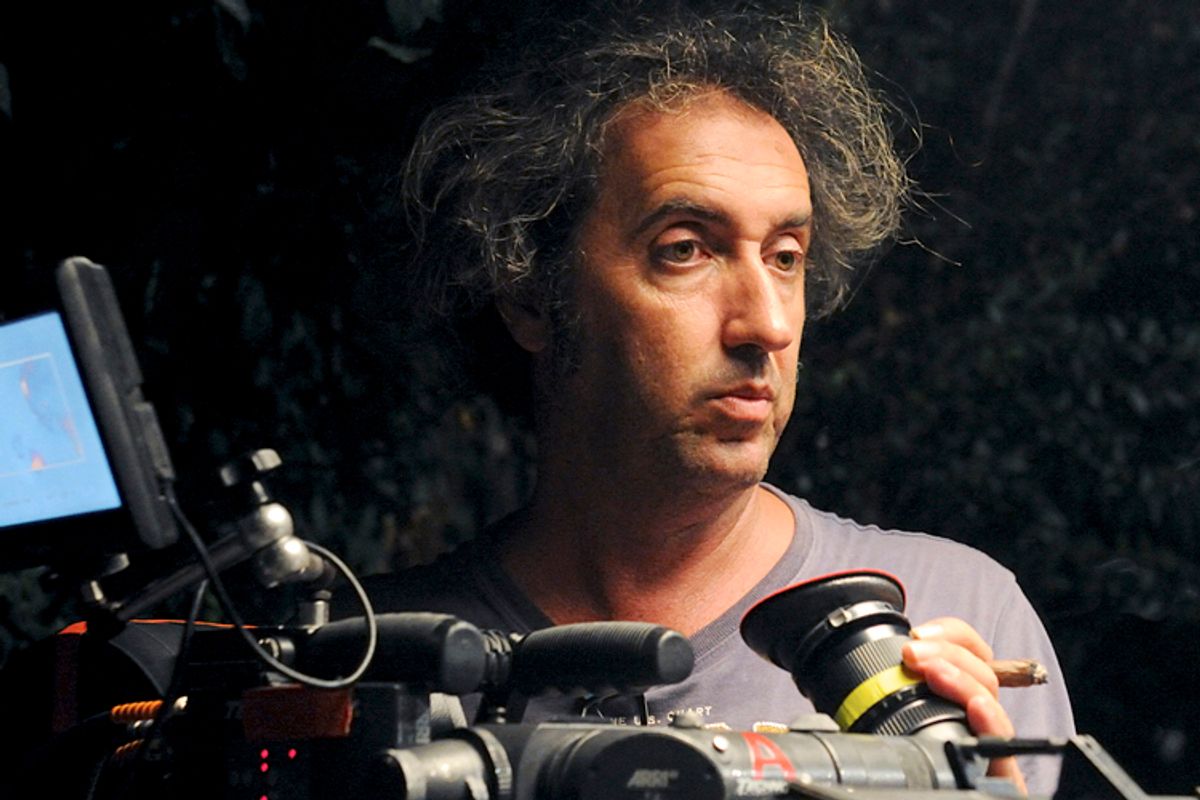 Italy has won the most Academy Awards in the history of the best foreign language film category, with 13 nations picking up Oscars for films including "Cinema Paradiso," "La Strada" and "The Garden of the Finzi-Continis." But not since 1999, when Roberto Benigni's flukey rise to fame culminated in Oscar attention for "Life Is Beautiful," has an Italian film won the trophy, and until this year, the last nomination for Italy had been in 2006.

That could all change this year, as Paolo Sorrentino's "The Great Beauty" is among the most highly regarded films in a competitive category. The film depicts the questing, unsatisfied soul of an aging male socialite, reflecting upon his past and his life in Italian high society amid an endless stream of parties and gatherings with old friends.

"We've had filmmakers who were giants. But as a country, Italy can't just live with the memories of the past," Sorrentino told Salon through an interpreter. "In Italy, there are several other filmmakers that are very talented and I hope they have the same luck I had."

Sorrentino was in New York at the headquarters of the Criterion Collection; "The Great Beauty" is to be released by the classic-film preservationist company, joining -- among many other films -- many works by Fellini, the giant whose long shadow overlays Italian film, and whose influence is palpable in "The Great Beauty."

"I try to keep myself as far as possible from Fellini's subjects," said Sorrentino, noting that Fellini was, along with Martin Scorsese, David Lynch and Joel and Ethan Coen, one of his favorite filmmakers. "I am a great lover of Fellini's films, but the topics my film deals with are not the same as Fellini's, fifty years ago."

Fellini's films had a decadence that spoke to a midcentury sense of Europe as the capital of culture; in "The Great Beauty," there's a palpable sense that Italy's best days are behind it. The nightlife, here, is fun to watch but doesn't seem fun. It's all repulsive in its flaunting of wealth in exactly the same way as the party scenes in "The Wolf of Wall Street." The whole thing speaks to a sense of malaise in the central figure's soul.

The director, though, denied that the film was directly intended to speak to the passing of Italy's best days during and after the Berlusconi administration -- even though Jep, the protagonist, looks like the sort of fellow who would have prospered in the Berlusconi years. Sorrentino's interested in the character because he is a "paternal figure," not for the manner in which his situation mirrors privilege in Italy in recent times. "It is not a representation of the current Italian political situation. It is a film. Non-Italian audiences understand this better -- the film is concentrated on the difficulties of life."

"I'm less interested in a sociological or political approach," he added. "If there can be a political interpretation, it's a side effect, not predetermined."

But for all that the film was meant to be specific, the ex post facto application of national identity -- in an Oscar race in which Italy is competing against Belgium, Cambodia, Denmark and Palestine -- has made Sorrentino think a bit more. "I'm excited to be participating in the race. It's very important for me and my country. I'm realizing more and more that an Oscar is something that awakens national pride. In Italy, we're not champions of patriotism."

That lack of strong national identity, perhaps, is why Italy has fallen behind other nations in the foreign film races in recent years -- recent winning films like "A Separation" or "In a Better World" are, if not patriotic, suffused with national identity. With its last win coming from a fantasy about individual heroism in Italy's history, the nation's next win could just come from a film that struggles to find a way beyond the materialism and venality of the immediate past. And that's why the declining, spendthrift, giddily unhappy characters of "The Great Beauty," representing to different sets of eyes either Italy or only themselves, are as endlessly rewarding as they are.