An upbeat opening ceremony's a natural thing, but it was still strange to watch 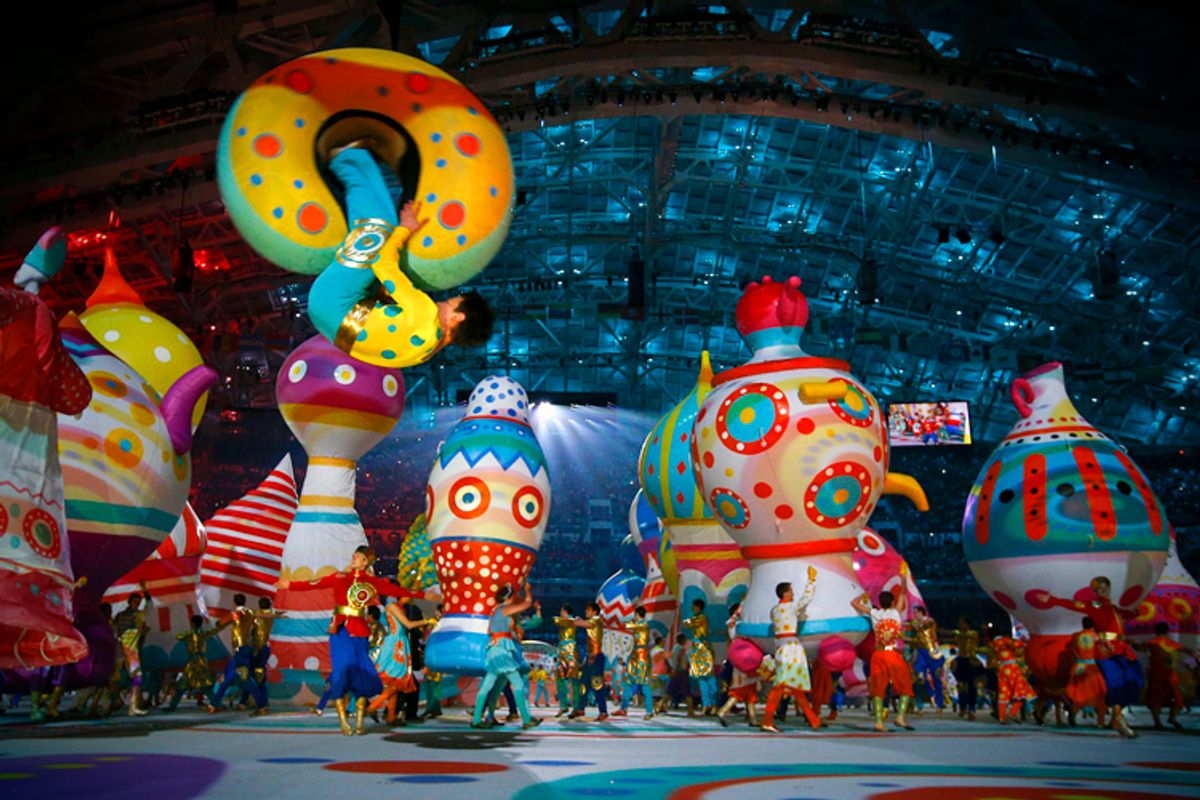 This afternoon, as I streamed the opening ceremonies of the Winter Olympics from the BBC's website thanks to a handy bit of VPN-manipulating software, I began to devise a drinking game for those in the States patient enough to wait for it to air at prime time/happy hour on NBC (and for those doing so, spoilers follow!). The game goes like this: Take a sip every time a letter of the Cyrillic alphabet appears. Take three sips any time the word "troika" is mentioned. Take a shot every time a correspondent points out the presence of palm trees in Sochi -- a double if he or she wisely submits that said trees should make competing athletes from island climes feel more at home. And take three shots of your stiffest vodka whenever a commentator watching the razzle-dazzle cavalcade of Russian history parading across the stage at Sochi's Fisht Olympic Stadium awkwardly draws attention to the tragedy that underscores any moment of that history.

Russia attempted to outshine previous years' ceremonies by updating the traditional Parade of Nations. This year athletes from more than 80 countries emerged from beneath a massive, illuminated map showing the origins of those competitors. BBC correspondents were only fulfilling their journalistic responsibilities by pointing out, as Olympians from Jordan marched proudly up the ramp, tensions between the two nations. During a vivid, whimsical sequence depicting the construction of Moscow's famous St. Basil's Cathedral, the same correspondents felt compelled to recount the legend that says Ivan the Terrible had St. Basil's architects blinded so that they could never re-create the landmark masterpiece. Similarly, the construction of St. Petersburg, dramatized by a somber, beautifully choreographed sequence about the rise of imperialist Russia, elicited remarks that said the city could never have been built but for the efforts of countless peasants who lost their lives in the process.

I cast absolutely no shade upon the Russian government and its right to portray the country in the best possible light. Such is the prerogative of any host nation. Moreover, what is the point of the opening ceremonies if not to get participants and viewers alike excited about a decades-long tradition of unity and good faith competition being held in a putatively beautiful, safe and spiritually uplifting locale? That mission typically involves a quick -- well, in this case, 160-minute -- primer in the most revered aspects of the host nation's history. The Sochi ceremonies today did so quite admirably. The aforementioned St. Basil's segment recast medieval Russia's Post-Mongol invasion as a sort of Cyrillic "It's a Small Word" complete with animated technicolor onion domes.

Still, with all the controversy currently surrounding the Sochi Olympics, omissions of any kind seem more glaring. Certainly, the Russians are proud of their history and should leave it to the rest of us to interrupt their national anthem with anecdotes about Ivan's rage. But convincingly relaying the glory of Moscow or St. Petersburg becomes a bit more difficult when, right outside the stadium where all this is taking place, an Olympic city remains unfinished and, apparently, stray dogs roam the streets.