Soaring past my midlife crisis

As 40 approached, I faced so many night terrors. But when I grabbed the trapeze, all my anxiety fell to earth 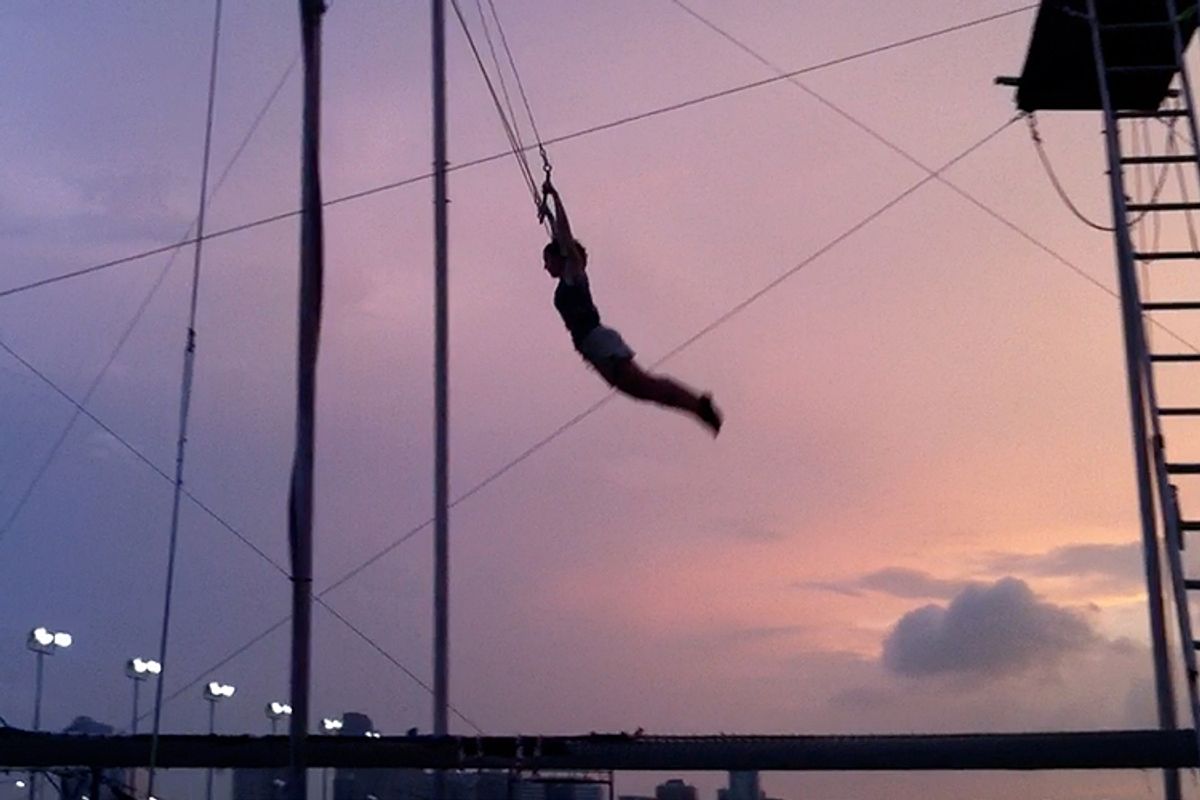 I got the inspiration for celebrating my 40th birthday from a “Sex and the City” episode where Carrie flew through the air with the greatest of ease, but I kept the reference to myself, realizing even that showed my age. All the girls are watching “Girls” now.

I invited ten of my friends to join me in a class held on the Manhattan waterfront, but only my pal Jill, an adventurous documentary filmmaker and part-time dancer, came through. Emails poured in complaining of bad backs, stiff necks and weak upper arms. Apparently I wasn’t the only one aging.

Signing up two weeks in advance, I cringed as I filled out the information form. It asked not only who to contact in case of an emergency, but also the name and phone number of my doctor. The mandatory waiver read: “I acknowledge that my participation could entail known and unanticipated risks that could result in physical or emotional injury or death.”

I had a full 14 days to over-analyze those words. My imagination went wild: What had people witnessed to cause emotional injury? What could the unanticipated events be, and which ones might result in death? During the day, I pictured myself soaring through the air backlit by the New York City skyline, but in the dark of night I was paralyzed by anxiety. And the trapeze triggered other fears.

I was in the midst of a middle-of-the-night midlife crisis. Never again would I hear someone say “You’ve got your whole life ahead of you.” I worried about my career. My graphic design business had been slow while I struggled as a writer. I’d made much more money in my early thirties, and while I blamed the economy, an evil inner voice said maybe it was me. Was I was losing my edge and falling behind with digital design and social media? I made a mental note to send a tweet in the morning from my dormant Twitter account.

All night long my mind catastrophized, making to-do lists, or not-to-do lists: Don’t eat carbs, don’t smoke more than two cigarettes a day, cut down on drinking. My manic memorandum included how to look better: Wear bangs to cover up my forehead wrinkles, get a Brazilian bikini wax. More hair on top, much less on the bottom would certainly make me look younger.

I wanted to remain fresh and youthful in my husband Niklas’s eyes. We got married later in life, both at the age of 37, and I didn’t want to age, warp-speed, when we’d barely passed the honeymoon stage. Meanwhile, every day I’m forced to share the sidewalk with tall, willowy NYU students, skin taught and smooth. Their freshness, innocence and raw energy make me feel tired and haggard in comparison. I no longer find it relaxing to flip through magazines perusing the ads; the pubescent, stick-thin beauties only add to my panicked realization that I'm well past my prime. It’s hard to compete with youth. Impossible, actually; aging is not a choice.

The day arrived and I showed up at Pier 40 on the West Side. There was no turning back; the evening’s plans had been set. Jill and I were accompanied by our husbands, and afterward, we planned to meet a group of friends who were setting up a picnic on the nearby Christopher Street Pier.

The instructor gave some very basic instructions for what sounded like some very advanced moves. We stood with eight others on a chalk line on the tarmac and were told to jump over it on the word “hup.” So we took one bunny hop on a flat surface before jumping off a platform 30 feet above a net that was 10 feet above the roof, three stories above the ground — with the Hudson River on one side, the West Side Highway on the other.

We took turns climbing up the rickety ladder to the platform. We were told to follow their commands: On “Knees up!” we had to thread our feet through the bar in one swoop, lock our knees onto the swing and then on “Hand down!” hang upside down, swaying back and forth before pulling feet out, assuming the landing position and dropping into the net.

On my turn, I discovered a fear of heights that hadn't existed in my youth. I hesitated to let go of the support structure to reach out and grab the bar. You had to lean way over the edge in order to reach it, with the assistant holding onto you by nothing but your safety harness. Second hand on the bar now and nothing below. We were told to lean our chest forward, feet apart, bottom out. In a very awkward position already, the bar was much heavier than I expected and pulled me forward, forcing me to push my rear end out even more. I dug my toes into the perch.

“It’s not a question,” the assistant said impatiently.

The next time she yelled “Hup!” I forced myself to jump. It felt like slow motion until inertia pulled me forward into a beautiful swoop. Although it took all my focus to concentrate on the commands, it was a rush as I completed the maneuver and bounced gently onto the net below.

The second swing was the same but with an added flip. Again followed by a dizzying rush of adrenaline. On the third try I was caught by a hunky man on a swing opposite, gripping his hands in midair. By the fourth time it got easier, and I wanted to swing back and forth forever. Yet my body wouldn’t allow it, and with arms shaking and knees aching, I dropped to the net a final time.

My husband recorded it all. In the videos Jill and I looked fantastic, backlit by a violet dusk sky. At that distance you couldn’t see the fear in our eyes. I immediately posted the videos to Facebook (of course I did) and maybe that was the whole point. I wanted to prove to people that my life is still an adventure and I can rise to a challenge. Or maybe I just love convincing others — and myself — that I’m still young. Perhaps I did it to display my agility and vitality to my own husband.

I don’t feel old, but the fact is I’m no longer in the upswing of my life. All that momentum pushes us to a great height only to have gravity pull us back down. Midlife. I envisioned a half-empty glass and shuddered to think about how the second half of a beer goes down much faster than the first. Better savor every sip.

Somehow flying through the sky released some of my irrational anxiety and ended my night terrors. I accepted that I have no choice but to take a leap of faith and hang on tight. To propel forward in my career and my life as I have always done, maybe pushing even harder. On the night of my birthday, as we lay in bed, Niklas complimented my form on the trapeze, and I told him I felt fantastic, like a teenager again.

But by the following morning, I had aged 60 years. A soreness set in so deep that I groaned every time I moved. I couldn’t move my neck, and the muscles in my lower back were sending spasms up my spine. I no longer have a six-pack of ripped abs, but whatever was in there felt like it had ripped. I was laid up like an invalid, and Niklas brought me glasses of water and helped me roll over to more comfortable positions.

So this is what it will be like, I thought. And as Niklas reached out and stroked my wrinkled forehead, I realized that I kind of liked it.

Christie Grotheim is a New York-based writer whose work has appeared in The New York Observer, OurTown Downtown, and Mr. Beller’s Neighborhood. She is a regular contributor to the West View News and has recently completed a 15-part series of articles for petrolicious.com, documenting a two-month cross-country road trip in her ’79 Lincoln Continental Town Car. Read more on her blog, cgrotheim.tumblr.com.