Is this the world's oldest landscape painting? 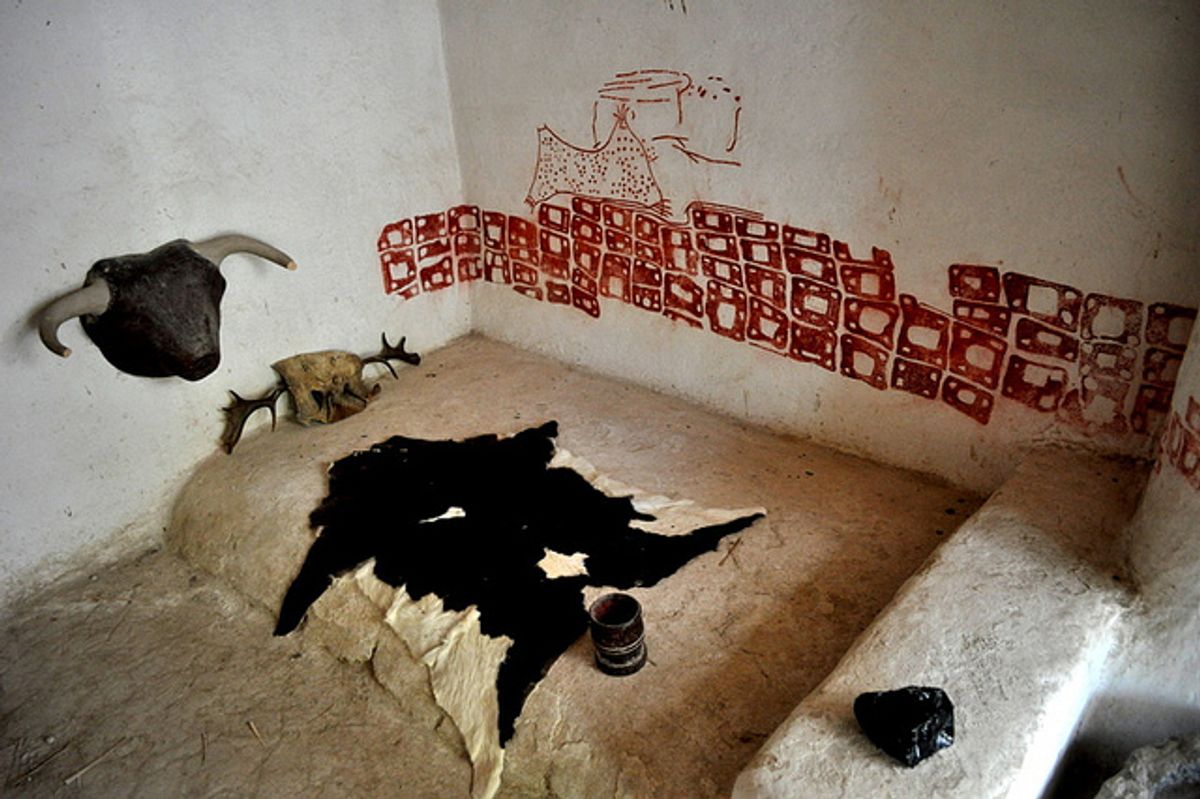 An on-site reproduction of the mural in Turkey. (Image courtesy of Sarah Murray/flickr, and used with Hyperallergic's permission)
--

The oldest-known landscape painting might have been created in modern-day central Turkey, according to a new study. Since the neolithic mural’s discovery in the early 1960s, scientists haven’t been sure whether the creators of the three-meter-wide painting were depicting a simple geometric pattern or an actual image of a nearby volcano. Though the new study seems to tip the scale toward the latter possibility — as suggested by The Art Newspaper — we’re not quite sure how far. It all comes down to how much we can presume about the intentions of an artist working 11,000 years ago.

The British archeologist James Mellaart first found the mural in the early 1960s inside a mud-brick house in the proto-city of Çatalhöyük, which was inhabited by up to 8,000 people 8000 BCE–6000 BCE. He believed the image represented a volcano 80 miles away, despite the fact that there are no known maps from that time period. Since then, archeologists have more cautiously posited that the painting shows a leopard skin with an abstract pattern below it, as many other artistic representations of leopard skins were found in the town.

In 2013, a team of researchers led by geologist Axel Schmitt traveled to Mount Hasan, a volcano 130 km (80.7 miles) northeast of Çatalhöyük, and took samples of pumice from the mountain’s base and peak. Those samples revealed that the volcano erupted around 6960 BCE, which means that the artists would have either seen the explosion first-hand or heard about it second-hand as a story passed down through generations. The eruption would have been a spiritually important event to the town’s inhabitants, as the study explains:

In the “map” interpretation, the volcano and its violent eruption are posited to have been significant for the inhabitants of Çatalhöyük because they procured obsidian in the vicinity of (albeit not directly from) Hasan Dağı … Alternatively, the natural spectacle of a cataclysmic eruption may have imprinted itself in the collective memory of the Çatalhöyük residents, charging the mountain with special cultic or religious significance …

But correlation does not equal causation, and just because the city’s inhabitants may have seen the eruption doesn’t mean that the artist (or artists) behind the mural was actually depicting it. As Schmitt himself told NPR, there’s even a kind of presumptuousness in trying to do so. “You know, these people that lived in Çatalhöyük 9,000 years ago — they are fascinatingly strange to us,” he said. “There is always a danger in taking our views and knowledge and trying to impose it onto a culture that is that different from ours.”

If anything, the study shows the tenuous nature of using natural phenomena to technically analyze works of art. Sometimes it works — as in the recent case of the Monet sunset — and sometimes it doesn’t. And even if you could prove the ancient mural represents the mountain, it would still have two other contenders for the title of world’s oldest map or landscape painting: a 14,000-year-old engraving from Spain and a 25,000-year-old drawing from the Czech Republic. For now, though, there just isn’t enough proof.