The skier, sidelined from the Olympians, tells a women's magazine that movie stars are "skinny-fat" 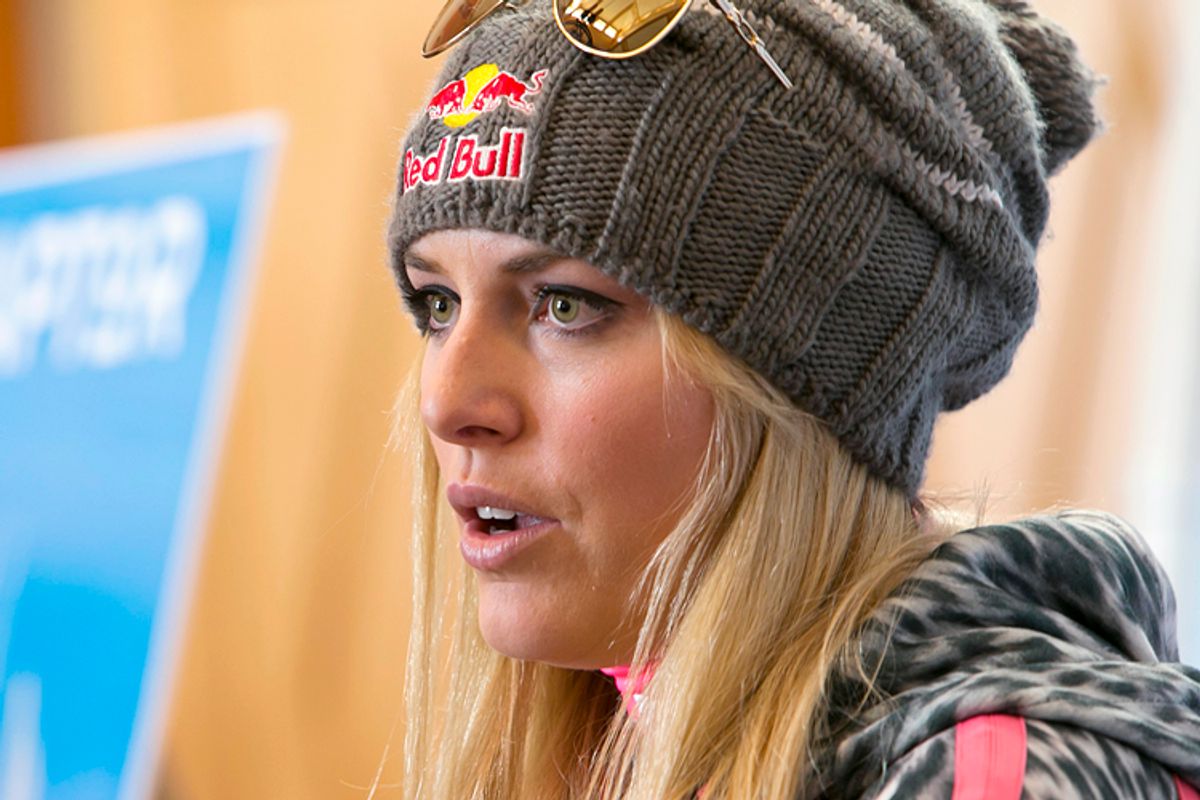 With the Sochi Olympics unfolding, American ski racer Lindsey Vonn has been sidelined by injury. But she's found a way to stay in the spotlight.

Over the first weekend of the Olympics, an interview from last month continued resurfacing on tabloid websites, as attention was paid to the athletes and the absence of one of America's most famous winter athletes. Vonn, who took home the gold at the 2010 Olympics, took the opportunity of being interviewed by a women's magazine to bash the bodies of more or less every female celebrity on the scene. Vonn told Self:

"It was hard to go to the Met ball [last May], with people who eat lettuce and a Diet Coke for dinner. It's difficult to be at events with a room full of women who weigh half as much as you do. That's always tough. I don't envy them, though, because so many of them are skinny-fat. They have more cellulite than most people. I feel like I need to give them a cheeseburger. It's sexy and beautiful to be strong."

The Met Gala is a fashion-industry event attended, last year, by Vonn as well as luminaries including Miley Cyrus, Gwyneth Paltrow, Jennifer Lawrence, Rooney Mara, Anne Hathaway, Beyoncé, Madonna ... the list goes on. That Vonn didn't name any specific stars was at once tactful and strangely egotistical. Not one of the women has it figured out quite as well as does Vonn.

Leaving aside the confusing specifics of Vonn's critique -- eating cheeseburgers for a perceived untoned physique covered in cellulite might not be a nutritionist's recommendation -- her hectoring, nasty tone is likely to keep her from getting invited back. Self represents its question to Vonn as "Have you ever felt insecure when it comes to your body?" She took the opportunity to describe just how secure she feels in comparison to all these unhealthy, unattractive creatures unlucky enough to cross her path.

Vonn has long sat at the intersection of sports culture and the body fetishism: A Google search for "Lindsey Vonn Sports Illustrated" pulls up her bikini shots for the magazine's Swimsuit Issue before it does any news about her long career. Vonn also posed for ESPN the Magazine styled as Sharon Stone in "Basic Instinct" moments before Stone famously uncrosses her legs.

And this is all within her rights -- just as it's Hollywood actresses' right to go to an event without a fellow guest criticizing them in the press for being so gross-looking. But Vonn's career as a gifted athlete and renowned beauty tests the limits of how much of gawking at Olympians is the noble admiration of the human body at its strongest and how much is good old-fashioned objectification. The ESPN "Body Issue," for instance, is a gathering of top athletes stripped down to reveal physiques at once impressive and, depending on one's taste, titillating. Vonn has done a good job of capitalizing on her appearance -- but because gazing at her can be explained as an attempt to understand what it is to be physically powerful, she's elevated her swimsuit modeling to be somehow different than, say, a Hollywood actress's posing seminude for Esquire. Both are acceptable -- because they're no different at all.

Vonn, who posed for her Self interview in skintight Team USA leggings and a bra, does not face much criticism from people who don't think she's beautiful. Her very presence at the Met Gala was an acknowledgment not of her prowess as an athlete but of certain x-factors that include her appearance. A more gracious public figure might have acknowledged, even to herself, that the game she's playing is not so very different from that of any of the other stars at the Met Gala. It's sexy and beautiful to be strong, sure -- but it's sexier to be mature enough not to tear down other celebrities for attention.