Rand Paul's rhetorical garbage: Why his "moderate" pose is fooling no one

Paul says the GOP should be more "welcoming," or they'll lose Texas. Has he seen his own voting record lately? 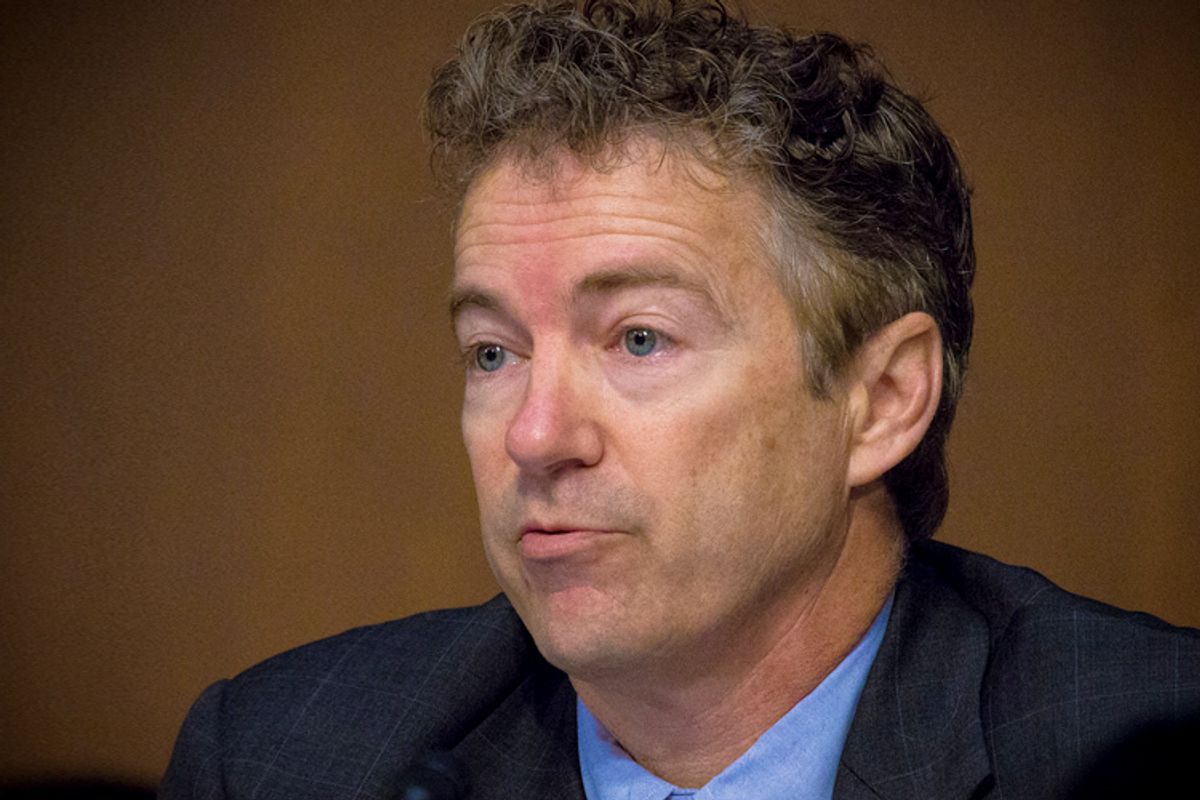 Sen. Rand Paul, arbitrarily deigning himself the GOP's wizened sage on matters of diversity, gave Texas Republicans a dire warning over the weekend: "Texas will be a Democratic state within 10 years if you don't change."

This is not the first time the state GOP has heard this popular refrain. For the most part, their reaction has been to plug their ears and go "LA LA LA CAN'T HEAR YOU" and then go and try to disenfranchise everyone, to buy time. But since demographic models show Texas' population to be 10 billion percent Hispanic within a decade or two, and Hispanic voters going Democrat by about a wide margin, there's only a limited and shrinking amount of time to buy.

“People who are Hispanic or Latino, they have to believe that we want them in our party, so it is an attitude thing as much as it is policy,” he said.

One of those messages, he said, should be: “If you want to work and you want a job and want to be part of America, we will find a place for you.”

Isn't that sweet? What a fella, this Rand Paul, always finding a place for the people who want to work hard and be part of America.

One question, though: What, precisely, is Rand Paul saying the party should do?

Paul occupies a unique, seemingly untenable space in Republican politics: someone who can maintain the reputation as "open" to an immigration reform package, perhaps even an advocate of it, despite not having any sort of record to support that. He voted against last year's comprehensive immigration reform package in the Senate, and did so in showy, loudly broadcast fashion. He didn't even have an especially creative reason to distinguish his "no" vote from his congressional colleagues' "no" votes. He thought the bill didn't first secure the border, and also engaged in some classic fear-mongering about the "gang members, drunk drivers, and sex offenders" who would flood into the country were the bill to become law.

The main amendment he proposed to the law was to require a congressional vote, rather than federal agencies' determination, that the border had been secured before offering application for legal status to those already here illegally. In other words, he would have required Congress to make a direct vote on granting legal status to illegal immigrants. It's hard to see the GOP ever allowing something like that to pass, even if no single person enters the United States illegally for 10,000 years. This is why bipartisan negotiators agreed that the package needed to be comprehensive and set the process in motion all at once!

Paul's attempt to have it both ways on immigration reform -- to speak of it in welcoming terms but come up with excuses to never vote for any negotiated package -- has been noted by his colleagues.

"Paul has frustrated some Republicans during the immigration debate," Politico wrote last July, "by consistently arguing in favor of reform at the conceptual level, but shying away from each of the compromise proposals that came up in Senate negotiations."

That piece was in reference to a trip Paul made to Nevada, where he trotted out more or less the same line that he used again this past weekend: “I think the message for the Republican Party needs to be that we welcome you. If you want to work, we will find a place for you.”

Paul has done a nice job crafting this image of himself as someone who's an immigration "moderate" and someone who "gets" the need to broaden the demographic makeup of the Republican Party. But unless he starts to actually vote in a way that reflects his rhetoric, he merely represents that lame strain of political opinion that suggests Republicans don't need to change any policy positions, they just need to avoid saying mean stuff about "self-deportation" and whatnot, as though the rhetoric isn't an inevitable outgrowth of straitjacketed policy.