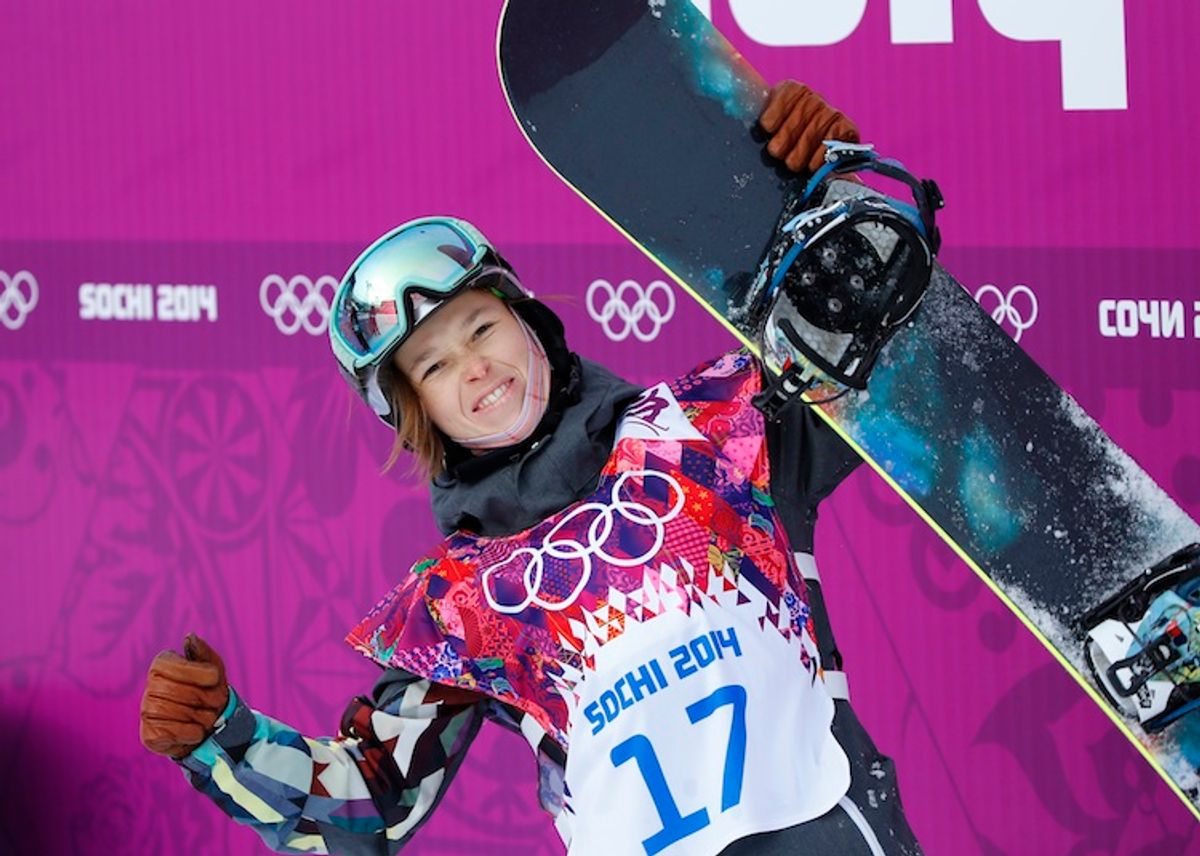 Sunday’s prime-time coverage of the Winter Olympics demonstrated many things, but perhaps this one above all others: female snowboarders are total, monster badasses.

It was extraordinary to watch all of the women’s slopestyle finalists glide down a mountain like the Silver Surfers of Sochi and rocket themselves into the air, even if we were seeing them do that many hours after they did it live. This was especially rewarding for supporters of Team USA to witness, since all of that gliding and rocketing ultimately resulted in a gold medal for American Jamie Anderson, the first ever women’s slopestyle gold medalist in this brand-new Olympic event. But even more impressive was the way these competitors handled setbacks and defeat.

I mean, holy mother of Putin, did you see the Czech Republic’s Sarka Pancochova crash-land after an off jump, then start oozing down the mountain like a Raggedy Ann doll with all her stuffing removed? She hit her head so hard that it cracked her thick helmet almost in half. Anyone who saw that awful spill and didn’t gasp either wasn’t paying attention or has permanently lost the capacity to gasp. (Assuming it hasn’t been yanked off of YouTube, the moment can be seen here, as well as via this BuzzFeed Sports Vine video.) If Pancochova had been a player in the NFL, that moment probably would have led to her being carried off the field on a stretcher, and possibly deemed ineligible for at least an additional game. But this is the Olympics. So what did Pancochova do? She took a few moments to recover, then she got up, ski-surfed the rest of the way down the mountain and waved to the crowd. Come on: Get off your feet. Slow clap a standing O for that. She totally deserves it.

While that may have been the most amazing recovery in the slopestyle competition, it was equally remarkable to watch how the other eliminated women handled their disappointment. Ty Walker, a 16-year-old American who didn’t perform well enough to medal, reacted to missing her big chance by shrugging her shoulders as if to say, “Eh, I tried.” When the camera captured fellow American Jessika Jenson learning that her score wasn’t high enough to put her near the top, she said, “Oh well.” And then: “I heart Idaho!” Every single one of these women had their hearts totally in this thing, but kept their heads about them when the turns didn’t twist their way. As for the woman whose turns were just right, Anderson just seemed incredibly happy and humble to be where she was. “I’m so grateful,” she said upon winning gold. “The course was so fun and life is good.” Her appreciative yet laid-back attitude could not have been more refreshing.

The admirable behavior of Anderson and all the snowboarders made it doubly irritating when announcers Todd Harris and Todd Richards made some stupid, sexist comments during the play-by-play of the event. “Just five or 10 years ago, that would have been a great men’s run,” said one of the Todds during an earlier, pre-helmet-cracking Pancochova run. “Torah [Bright] knows how to ride a snowboard better than a lot of guys I know, and these are guys that get paid to do it,” said the other Todd. Or maybe it was the same Todd. Look, I don’t know which Todd said what and I apologize if one of the Todds is less sexist than the other, but gee-zus, considering that these women can perform the way they do and show such incredible sportsWOMANship, they certainly deserve more respect from the guys analyzing the action.

Elsewhere in NBC’s prime-time coverage, we were treated to the sight of figure skaters leaving it all on the ice during the team competition while President Vladimir Putin, who was in the audience, looked even less impressed than a McKayla Maroney meme.

The 15-year-old Russian Yulia Lipnitskaya triple lutzed the shit out of her routine, and demonstrated such insane flexibility during her spins that, at one point, I honestly thought she might have physically detached her right leg from the rest of her body. She was simply -- say this next word in your best Scott Hamilton voice -- awesome. So what was Putin’s response? “Meh, that was pretty good, I guess.”

WHAT DO YOU WANT FROM THESE PEOPLE, PUTIN? Actually, please don’t answer that.

Other notable skates included a pretty much perfect one from Gracie Gold, the Olympian with the name most likely to become a pun in a newspaper headline; a pseudo-reenactment of the movie “Black Swan” (minus all the kinky stuff involving Mila Kunis) from the Russian free dance pair Elena Ilinykh and Nikita Katsalapov; and a routine from Americans Meryl Davis and Charlie White that was so graceful, it looked like a ballet dance that, just by pure coincidence, happened to involve ice skates. The ultimate result of all the team skating was that the Russians won gold, the Canadians took silver, the U.S. got bronze and, after airing all the skating that led to those medals, NBC didn’t even bother to show the medal ceremony.

The last notable element of NBC’s prime-time broadcast was the coverage of men’s downhill alpine skiing, where we got to see athletes shooting down a curvy, two-plus mile course with a 3,500-foot vertical drop, at speeds of upward of 70 mph. All that lightning-quick careening and soaring over a jump dubbed the Russian Trampoline worked out well for Matthias Mayer, the Austrian who won gold. It worked out less well for veteran Olympian Bode Miller, who was expected to medal but finished in eighth place. When Miller realized his time wasn’t good enough, he bowed his head in disbelief. His wife, watching from the sidelines, pulled her hood over her face. Neither could conceal their disappointment. Honestly, you couldn’t blame them at all for responding the way they did.

But their reactions made it all the more remarkable to think that some athletes can train for months and years, watch their Olympic dreams get destroyed in mere seconds and deal with it all by uttering three simple words: “I heart Idaho!”