White House is considering drone strike to kill U.S. citizen. Should this elicit more concern than other targets? 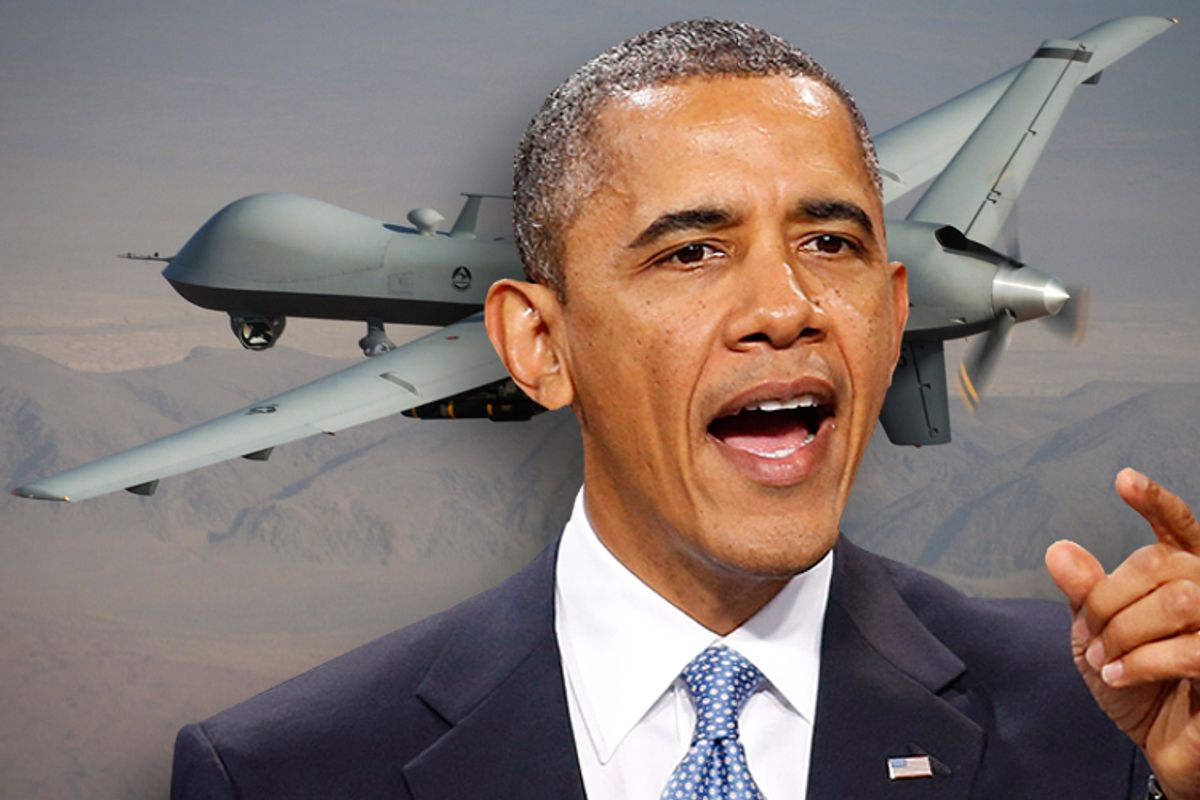 Once again, news that the White House is considering using a drone strike to kill a U.S. citizen abroad is fostering an amorphous, ill-defined outrage bubble.

Precisely why killing a U.S. citizen -- reportedly an active al-Qaida member -- would be troubling deserves some hashing out. The fervid concern for an American life (even an al-Qaida member) over the many hundreds of non-American civilians killed by the CIA and Pentagon's drone programs deserves scrutiny. I suggest that, of course, American lives should not be held in higher sanctity than the lives of foreigners. However, the considerations required when a U.S. citizen becomes a potential drone target illustrate the vagaries of a war without border or boundary under which we live, administered by secretive judicial processes and enabled by drone technology.

One basic and initial point is that U.S. citizens, even terror suspects, should not be summarily executed without being brought to trial. The administration's answer -- grounded by the overreaching legal framework established in the post 9/11 Authorization of Military Force Act -- is that so long as the Justice Department can show that military action in this case is "legal and constitutional," then the suspect is fair game for a drone death. This reflects an inherently problematic legal structure: Based on an executive wish to take out a given target, the judicial branch must engineer acts of obfuscated legal jujitsu to contain the desired killing within the inscriptions of the law. As was the case with Bush-era DoJ legal opinions, which condoned torture and extraordinary rendition, appeals to law in these cases have proven little more than an ad hoc means of ass-covering for human rights and civil liberties abrogations.

Justice Department authorizations for controversial drone killings, couched as they must be in questionable claims of "imminent" threat, will be classified and kept from public view. The Obama administration has admitted to killing by drone strike four Americans since 2009, including the targeted Anwar al-Awlaki and his teen son. The 16-year-old's death was publicly justified by White House senior advisor Robert Gibbs, who claimed the boy “should have [had] a far more responsible father.”

This latest potential American drone target (whose identity has not been publicized) raises questions like those posed by libertarian Sen. Rand Paul in his epic filibuster over the nomination of drone czar John Brennan to CIA director. "Are we the battlefield," asked Paul, who was particularly concerned about the precedents set if a U.S. citizen can be extrajudicially executed. The answer, of course, is yes: New topographies of war, enabled through both drone technology and the waging of a war not on a nation but a notion (terror), mean that anywhere can be a battlefield, and a citizen of any country can be an enemy.

This fact is highlighted in the latest U.S. drone target considerations. As the AP reported, "U.S. officials said the American suspected terrorist is in a country that refuses U.S. military action on its soil and that has proved unable to go after him. And President Barack Obama's new policy says American suspected terrorists overseas can only be killed by the military, not the CIA, creating a policy conundrum for the White House." We see, then, an executive branch (with the help of the judiciary) trying to find ways to sweep away traditional lines of sovereignty to enable an American act of war to take place in a land that is neither engaged in official conflict with the U.S., nor willing to allow U.S. military action within its borders. For the U.S. this is a "conundrum" to work around, not a set of legal and geopolitical boundaries to respect.

Maryam Monalisa Gharavi wrote for the New Inquiry last year that, with a monopoly on drone technology on its side, “The United States stands behind a one-way mirror playing the most terrifying sovereign role imaginable in a so-called globalized world, watching, calculating, and exacting who will die.” In this iteration of empire, any target (U.S. citizen or none) in any nation (compliant or none) is fair game, so long as the appropriate, secrecy-shrouded legal argumentation can be pulled from thin air.