Drug abuse, depression, early deaths: Hockey fights have a lot to answer for. The Olympics show a way forward 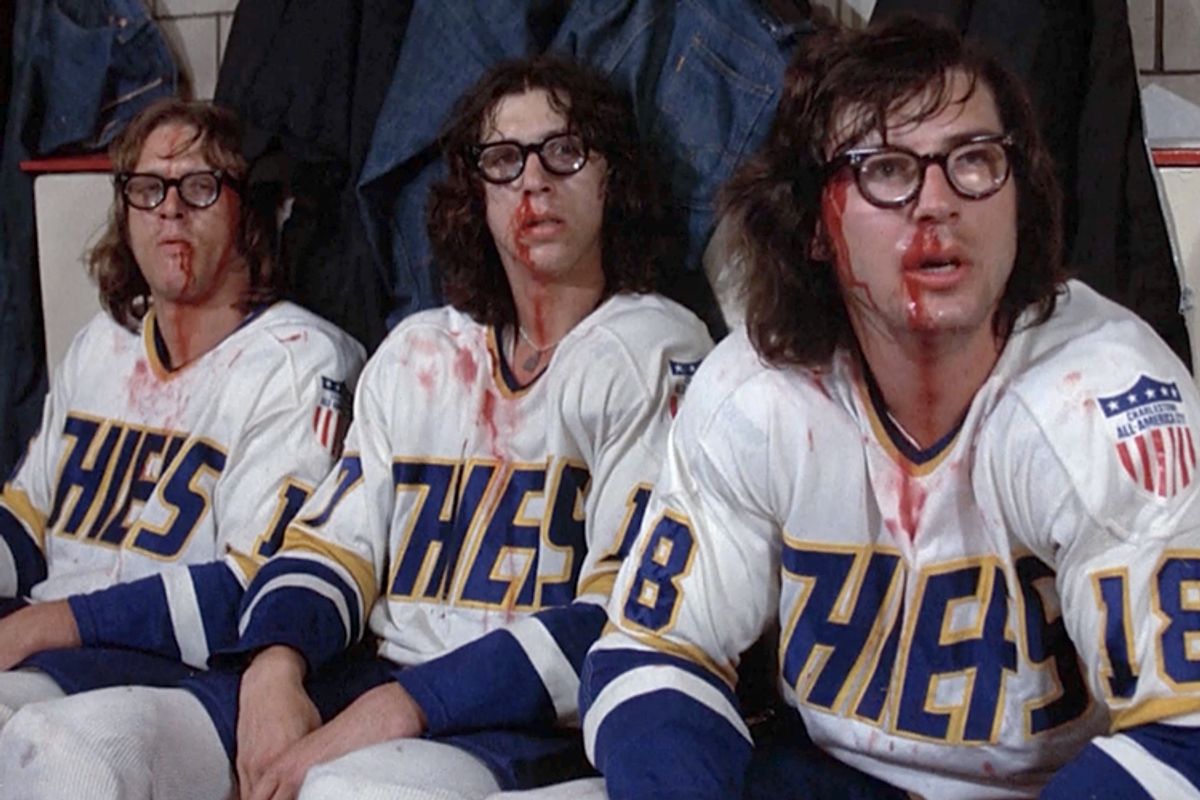 The first National Hockey League game I ever attended was a neutral site match between the Hartford Whalers and the St. Louis Blues, in Peoria, Ill. Here’s what I remember most about it: the Whalers’ Randy Ladouceur picked a fight with a member of the Blues. The crowd loved it. All around me, fans rose to their feet and cheered the brawl. It felt exactly like that moment in a boxing match when a fighter is pounding his opponent to the edge of unconsciousness.

Ladouceur got five minutes for fighting. The Blues’ Brendan Shanahan scored the winning goal on the power play.

That convinced me that fighting was a stupid strategy in hockey, but it didn’t turn me off to the game. Later that season, I went to a Red Wings-Blackhawks game at Chicago Stadium that ended with blood on the ice. After the Blackhawks moved to the United Center, I regularly bought $10 tickets and sneaked into the $20 seats.

Then came the awful off-seasons of 2010 and 2011, when four NHL enforcers -- Bob Probert, Derek Boogaard, Rick Rypien and Wade Belak -- died premature deaths. Probert, one of the most prolific pugilists in NHL history -- he was fourth all-time in penalty minutes -- had developed chronic traumatic encepholopathy, the same brain disorder that afflicts many pro football players. Boogaard, whose nickname was “The Boogeyman,” was the subject of a New York Times exposé that revealed he had died of an overdose of alcohol and oxycodone, which he was taking to deal with the effects of on-ice concussions. At 27, his CTE was even more advanced than Probert’s. Belak and Rypien both committed suicide, after years of depression.

Those deaths turned me off to the NHL, and its worthless tradition of fisticuffs. I haven’t bought a ticket since. But they didn’t turn me off to the game of hockey. The Olympic hockey tournament begins Tuesday, and I’ll be watching as many games as NBC will show me. I can only hope that the great hockey we’re going to see in the next two weeks will convince the NHL to follow the lead of the Olympics -- and every other professional league in the world -- by banning fighting.

In international hockey, a player who starts a brawl receives a match penalty: He’s ejected from the game, and another player has to serve a five-minute penalty. That pretty much makes the role of enforcer irrelevant, because who’s afraid of an enforcer banished to the locker room?

I enjoy rough hockey. One of my favorite moments of the 2010 Olympics: Russia’s Alex Ovechkin flattening the Czech Republic’s Jaromir Jagr with a brutal check, which led to a Russian goal. That was a clean hit, and a beautiful play. Unlike football, hockey can be a physical game without destroying players’ brains. But when you add in an unnecessary element of violence, they’re on the same moral plane from the standpoint of player safety. While it’s true that players have suffered career-ending concussions as a result of blindside hits and checks into the boards, plenty of others have been pummeled into retirement. And fighting is a stressful, psychologically damaging task that often leads to drug abuse and depression among enforcers.

Fighting apologists, such as "Hockey Night in Canada" clown Don Cherry and NHL commissioner Gary Bettman, argue that fights are necessary so players can “police” the game and prevent cheap shots against their teammates. Enforcers are also supposed to change a game’s momentum by firing up their teammates with a KO. I suspect the apologists just enjoy the violence, or, in Bettman’s case, enjoy that fans enjoy the violence. The website hockeyfights.com has a following that transcends interest in the actual game of hockey.

After the Times exposé on Boogaard’s death, Bettman defended fighting in a press conference.

“It’s a part of the game,” he argued. “It’s a small part of the game. It gets far too much attention. Most of our games don’t have fights and . . . there is a perception that fighting, or the threat of fighting, acts as a bit of a thermostat and a deterrent of other things you might not want to see on the ice. It’s a balance.”

Cherry -- a cheerleader for hockey violence who claims “the fans love fighting [and] the players don’t mind” -- was called out in a lawsuit by former NHL players suing the league for damages and medical care for brain traumas.

“For decades the NHL has nurtured a culture of violence. Films such as "Slapshot," "The Last Gladiators," "Goon," "Youngblood" and others reflect this NHL-inspired culture. The public statements of Don Cherry and the use of highlights on such sites as www.hockeyfights.com and his video series Don Cherry’s Rock’em, Sock’em Hockey are further examples of this violence-centered culture promoted by the NHL.”

Which leads to the question, if fighting is such an essential element of hockey, why is it banned in college and international play, and all European leagues, but encouraged in the NHL?

I suspect Canadian culture has much to do with it. Canadian TV stations feature the top fights every night, and almost all NHL goons are Canadian. In his book "The Meaning of Puck: How Hockey Explains Modern Canada," Canadian author Bruce Dowbiggin suggests that hockey adopted the Scottish/Irish tradition of “pleasure fighting,” characterized by the quip, “Is this a private fight, or can anyone join in?” (For a great example, watch the fight scene in "The Quiet Man.")

But the percentage of Canadians in the NHL has dropped from 98.6 percent in the mid-1950s to 52.3 percent this season. Since Russians, Czechs, Finns and Swedes began joining the NHL, it’s become an international league preserving fighting as a relic of its Canadian roots. (In a positive development, the number of fights per game peaked at 1.3 in 1987-88, the year before the Berlin Wall fell, and was down to .44 last season.) Cherry defends fighting so avidly because he’s an Anglo-Canadian jingoist who can’t stand seeing his country’s game wussified by foreigners. He even criticized the NHL’s “instigator rule,” which added a two-minute minor penalty to the five-minute major for fighting.

Fight fans have also argued that dropping the gloves has a place in the NHL because its rink is 15 feet narrower than the international standard, thus creating more conflict in a smaller space. That’s not an argument for fighting. That’s an argument for widening the rink. Another reason I prefer Olympic hockey: It’s a wide-open game favoring skating, speed and puck handling over brute force.

In a 2004 essay titled “The Trouble With Canada’s Game,” former Canadian college hockey star Paul Stothart lamented that North American hockey had become “a game of bumper cars — constant contact, minimal skating room, where players are encouraged to ‘skate through’ the hooking and grabbing that is seen at every point of contact. Passing is generally limited to power plays. Beyond power plays, the lack of skating room forces all teams to play a dump-and-chase style.”

Stohart suggested reforming the game by eliminating fighting and widening the rink to bring the “breathtaking entertainment of the Olympic Games” to North America: “Adding 10 feet to the width of the ice would provide almost 15 percent more skating room — thereby rewarding fleet forwards, penalizing lead-footed defensemen, and decreasing the ability of defending teams to create a ‘Sherwood wall’ across the blue-line.”

Stothart was right about fighting. It degrades hockey by filling rosters with players who have no skills beyond punching guys in the head. The Detroit Red Wings, the most successful team of the modern era, with 22 consecutive playoff appearances, don’t keep an enforcer on the roster. In fact, their success began after they got rid of Probert and began drafting skilled Europeans such as Slava Fetisov and Nicklas Lidstrom. You won’t see any enforcers in the Olympics, not just because there’s no fighting, but because if goons such as Shawn Thornton could actually play the game, he wouldn’t have to use his fists to stay in the NHL.

So the guys at hockeyfights.com won’t have any material for the next two weeks. I’ll have plenty of hockey to watch. But unless the NHL follows the direction of its demographics, and adopts the international standard of nonviolence, I may wait until 2018 to watch again.