As usual in Olympics prime-time coverage, the primary goal is to tug audience heartstrings 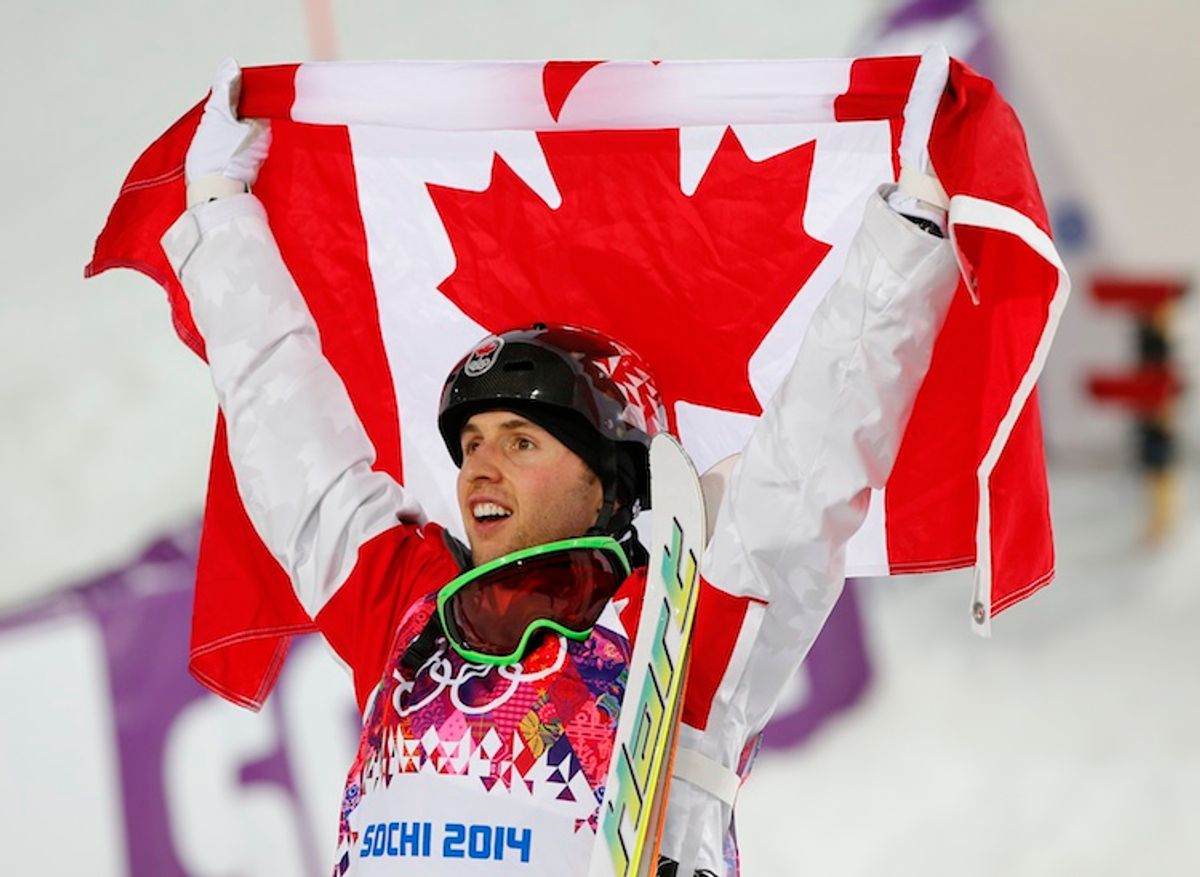 The Olympic games are about sports and the excitement of watching gifted athletes compete at the highest level. They’re also about making us cry.

During Monday's prime-time broadcast, NBC achieved that second goal courtesy of its simultaneously touching and blatantly tear-jerking coverage of Canadian skier Alex Bilodeau’s attempt to triumph in the men’s moguls event. Bilodeau was aiming for his second gold, having won previously at the Vancouver Olympics in 2010. A video segment that aired prior to his trips down the Sochi course focused on that quest for an unprecedented Gold No. 2, but even more so on his relationship with his older brother, Frederic, who has cerebral palsy.

“He probably would have been a three-time Olympic champion,” a choked-up Bilodeau said of his sibling. “He has the motivation.”

During that video segment, Bilodeau was crying. I was crying. Bob Costas was probably crying, although that could have just been his increasingly toxic case of pink eye, which has now spread to both eyes and, possibly, every NBC viewer who dares to look in the general direction of his ocular regions. (Poor Costas, man. That has to hurt.) The point is: The Bilodeau back story was moving, and it made his competition the most compelling one of Monday’s broadcast.

With a setup like that, anyone who didn’t already know the outcome of the moguls event had to assume Bilodeau wasn’t going to blow it and come in eighth place. He didn’t. While NBC built the suspense, constantly pointing a camera at Frederic as he cheered on the sidelines, Bilodeau shot through a flawless run that powered him straight to gold, and then straight over to his brother for a big hug, which, naturally, was captured on-camera. At certain moments, the whole thing felt a little exploitative, as if Frederic’s disability was being milked shamelessly for NBC’s Olympic storytelling gain. But Frederic looked so genuinely thrilled for his brother that it was tough not to share the joy. So fine. Mission accomplished, NBC: You manipulated our emotions just like you usually do during Thursday night episodes of "Parenthood."

The other big skiing story of the night was Julia Mancuso, the previous gold and silver medalist who earned Sochi bronze after tenacious downhill and slalom runs in super combined alpine skiing. The NBC broadcast taught us many things about Mancuso: that she trains in Hawaii; that she can play the ukelele; that, when asked to do so by an NBC reporter, she can actually provide color commentary on video of a downhill race she just finished; and that she works with a “body guru” prior to competing.  I don’t know this for a fact, but I feel pretty sure that her body guru is probably the same person who taught her to play the ukelele. But hey, man, who am I to engage in guru second-guessing? Whatever Mancuso’s been doing obviously worked. Now she has an Olympic medal of every color, and the U.S. has another medal to add to its Sochi tally, which, as of Monday night, stood at five. (Unfortunately, NBC failed to show Mancuso’s medal ceremony in prime time; same goes for Bilodeau’s. Apparently there wasn’t enough time, what with all the constant re-airing of seizure-inducing commercials for the Cosmopolitan of Las Vegas.)

Sadly, there was no figure skating on Monday, which left an entire nation feeling swizzle-deprived and bereft of triple toe loops. Instead we got: speed skating! Which isn’t as elegant, but involves people often wiping out on the ice. So there’s that.

Most of the drama in those two speed events -- the men’s 500m speed skate and the men’s 1500m short track -- came from what I shall refer to as the Smeekens Incident. That was the moment in the 500m when it initially looked like the Netherlands’ Johannes Smeekens had won gold, but then it turned out something was wrong with the timing mechanisms and Michel Mulder, also from the Netherlands, actually won it instead. Basically it was “Thrill of victory for Smeekens! … No, wait, agony … Is it agony? … Yes, it’s agony … But thrill of victory for that other guy from the Netherlands!” Actually, the bronze medalist in that event was from the Netherlands, too, and also happened to be Mulder’s twin brother, Ronald. Congrats, Netherlands! On a related note, once this whole Olympics thing settles down, it seems like the Mulder twins from speed skating should really get together for happy hour with the Dufour-LaPointe sisters from skiing. I feel like they’d have some things to talk about.

As for the 1500m short track, several dudes slipped on the ice during the various rounds, Canadian Charles Hamelin ultimately won gold, American J.R. Celski failed to place and Apolo Ohno -- once an Olympic speed skater, now an announcer of Olympic speed skating -- attempted to ratchet up the intensity by referring to the competition as “a chess game” and “a mind game” and, also, “a game of inches.” Basically, his point was: It’s a game. And it’s one that this time around, Celski, supposedly the next Ohno, didn’t win.

NBC’s Monday prime-time coverage closed by reminding us that Shaun White’s much-anticipated half-pipe event will be shown during Tuesday night’s broadcast. According to yet another uber-dramatic video segment and the commentary of Cris Collinsworth, the recently injured gold medalist is extra-anxious about competing, especially with all the snow-covered facilities turning into bumpy, less-than-optimal slush piles due to Sochi’s mild temperatures. The emphasis on White’s nervousness was an obvious tease designed to make us tune in again the following night. When we inevitably do, undoubtedly the Shaun White story will be the next one trying its damnedest to make us cry.