When adoptees report abuse by their adoptive parents, they can face unique challenges 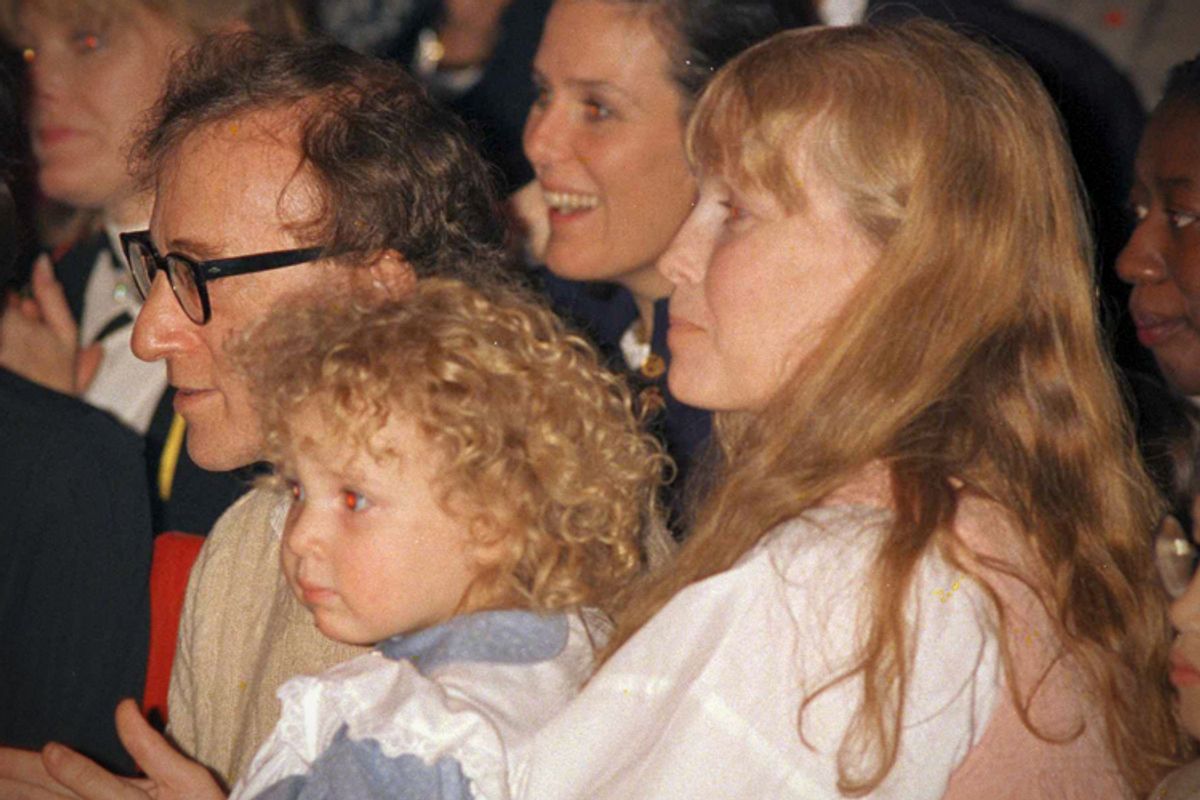 More than a week after Dylan Farrow’s open letter was published by Nicholas Kristof in his New York Times blog, her allegations of sexual assault by Woody Allen continue to be questioned and debated. In just about every article, one fact has come up again and again: that Dylan Farrow was adopted.

In an essay at Salon, Roxane Gay wondered whether reporters focus on Dylan Farrow as “Woody Allen’s adopted daughter” because they believe “that designation, by creating some distance, somehow lessens his alleged crimes.” Gretchen Sisson similarly questioned the frequency of media references to Farrow’s adoption in her insightful article for RH Reality Check: “[T]his diction is not being deployed as a way of examining the dynamics around adoption, or as a way of acknowledging the place of Dylan’s birth parents. It seems that the only reason to include this qualifier … is to stress the lack of genetic relationship between Allen and Dylan. Why? Does the removal of the incest taboo somehow make the alleged sexual abuse of a child less horrific, or more acceptable of a topic for public debate?” Sisson also pointed out that media references to Allen’s affair with and later marriage to Soon-Yi Previn, Mia Farrow’s adopted daughter, include these same qualifications.

I agree with Sisson and Gay that the frequent allusions to Dylan Farrow’s adoption are problematic if they are being made in an attempt to mitigate the backlash against Allen. These constant references do nothing to advance the many conversations we could be having about adoption in light of Dylan Farrow’s allegations. As an adoptee, when I first read Farrow’s account, I couldn't help thinking of the lack of control and agency infants and young children have when they are adopted, and all the ways in which Dylan Farrow and other adoptees can be failed by those who should be advocating for and protecting them. As we listen to Dylan Farrow, we should be discussing instances of abuse and assault within adoptive families; the factors that lead to child abandonment and adoption dissolution; and the complicated messages, stereotypes and power dynamics that affect both adopted children and adults.

“Adoptees are often expected to feel ‘grateful’ for their adoptive families,” psychologist and adoptee Dr. Juli Fraga told me. “If an adopted child has internalized this message about her adoption, disclosing sexual abuse from a family member might be even more difficult, because the victim may feel immense guilt for possibly rupturing the family that ‘took her in.’”

Gretchen, another adult adoptee (who bears no relation to Gretchen Sisson, and asks that her last name not be published), agrees with Dr. Fraga: “The adoptee, even in adulthood, is often spoken to as though he or she is still a child who should be grateful for a ‘better life.’” As a child, Gretchen was physically abused by one of her adoptive parents. Outsiders saw only the privileges her adoptive family enjoyed, and assumed that Gretchen must have “the best life ever.” No one believed her or took action when she tried to ask for help.

As an adult, Gretchen has found people to listen to and believe her, though “some were surprised to hear such a thing — an adoptee who was abused by an adoptive parent — because it seemed to go against what adoption is supposed to be all about.” While Gretchen’s story is quite different from Dylan Farrow’s, she insists that neither can be properly understood outside the context of “the adoption power and privilege differential.” Adults, she says, are far more likely to be believed than the children they abuse, and wealthy celebrity adoptive parents like Allen enjoy even greater power and privilege over their child victims. She believes that some people may be more likely to ignore or dismiss Farrow “because, even as an adult, she is still ‘Woody Allen’s adopted child.’”

Amanda Transue-Woolston, an adult adoptee and co-editor of the adoptee anthology "Perpetual Child: Dismantling the Stereotype," agrees that Dylan Farrow’s adoption is important to her story — both because it is part of her life, and because it might have an impact on the ways in which Farrow’s allegations are judged.

“I definitely think the pervasive stereotype of the ‘disturbed adoptee’ applies here, as I see people questioning [Dylan Farrow’s] credibility left and right,” Transue-Woolston says. (A Times commenter, for example, expressed skepticism about Dylan Farrow’s account by citing her adoption and birth family history: “I don't know at what age Dylan was adopted but I wonder if her history was known before she joined the family. To add to that a vindictive mother with a history of chaotic relationships … makes me question not whether Dylan is telling the truth as she knows it but whether her truth is in fact truth.”) “People have a choice of two voices to listen to: the voice of the accused abuser or the voice of the grown woman telling the story of a terrified child,” says Transue-Woolston. “I think it is telling of our society’s rape culture and the inclination to pathologize women, children — and adoptees — that so many defend the accused abuser rather than the victim of abuse.”

She believes the trope of “adoptee as perpetual child” also applies in this case, echoing fellow adoptee Gretchen’s point that adopted people are often imagined and portrayed as children — not as the adults they grow into. Although Farrow is 28 years old, Transue-Woolston notes, “She has certainly been responded to, whether by Allen or by random commenters on [the New York Times] blog, as though she is a confused child.” Woody Allen and his defenders present Dylan Farrow as troubled, brainwashed, attention-seeking and motivated by her mother’s bitterness toward Allen — in other words, incapable of acting with autonomy as an adult and understanding, let alone telling, the truth. She is both disbelieved and infantilized, and not considered to be the authority on what happened to her.

Transue-Woolston believes we should all be deeply troubled by the fact that Woody Allen was approved to adopt not once, but several times: “How Dylan was treated in her adoptive home matters. Questions must be raised within the specific context of adoption in this case, because her family was approved as fit to care for her.” In his New York Times rebuttal, Woody Allen also mentions being “extra carefully scrutinized by both the adoption agency and adoption courts” when he and Soon-Yi Previn adopted their two children — as if the vetting process he underwent should reassure us of his innocence.

Yet as Sisson pointed out in her article, we cannot forget the cases of abuse by parents who were, like Allen, approved to adopt. Nor can we fail to acknowledge the socioeconomic advantages that many adoptive parents possess — especially compared with their children’s birth families — which can sometimes make it easier for them to adopt, and more difficult to challenge their fitness to parent. As a film director continually hailed for his artistic accomplishments, Allen enjoys privileges — money, fame, international reputation, public adulation — that the vast majority of adoptive parents do not. The same privileges that may well have aided him in securing approval as an adoptive parent (not once, but several times) now serve to bolster the faith of those who simply don’t want to believe that the famous director would be capable of molesting his daughter.

“Because adoption involves children moving from a family of lesser privilege, that move is often seen as an unequivocal good,” Gretchen Sisson told me. “These children are avoiding whatever circumstances of their birth — poverty, a teen mother, a life in a developing country, etc. — have been deemed unsuitable. This makes adoptive parents into rescuers; they are providing their child with a ‘better life.’ Abuse is incompatible with this idea, as is the idea that adopted people should speak out about their abuse. After all, might they not still be better off if they hadn’t been adopted?”

Ultimately Dylan Farrow’s story is not about adoption. It is about what happened to her. Yet adoption — first by Mia Farrow, and later by Woody Allen — determined who would raise her; who would be charged with caring for and protecting her. Her adoption matters in her life, and thus it matters as we listen to her story. While Gretchen notes the many differences between Dylan Farrow’s individual experience and her own, she says that, as an adoptee and a survivor of parental abuse who only found people who believed her as an adult, she cannot help feeling a strong sense of solidarity with Farrow. “The account Dylan wrote for the New York Times sounded like something I would have written,” she says. “And we are doing her a huge disservice by not considering and acknowledging the whole of her life experience.”

Correction: An earlier version of this story misstated Woody Allen's relationship to Mia Farrow. The two dated for many years.