Why our stories about Russia are stuck in the past

From "The Americans" to "Iron Man 2," TV and films look back to the Cold War. They're missing out on Russia today 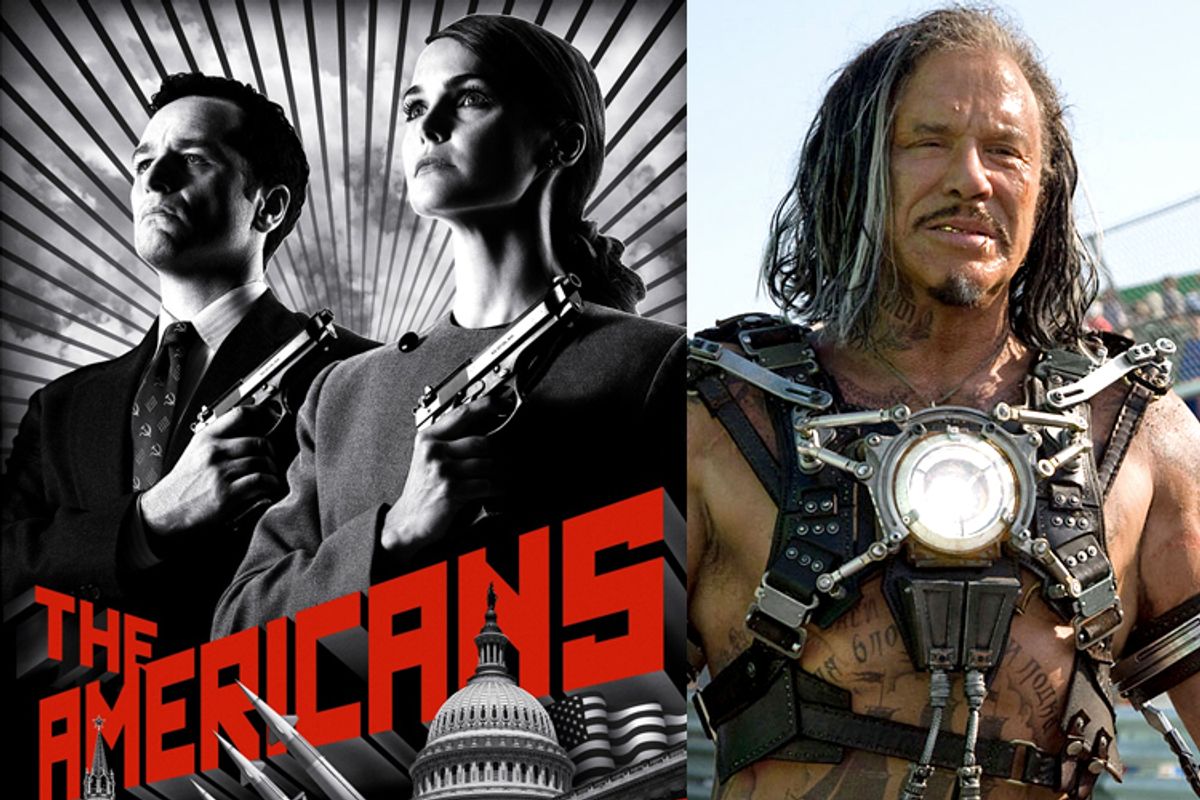 NBC’s coverage of the 2014 Winter Olympics in Sochi will be a new experience for many American viewers — not only because the Olympics are in Russia, but also because they are in 2014. Russia has loomed large in American pop culture for about as long as we’ve had one; its early on-screen depictions — often as a source of stock villainy and general menace — reflected the national anxieties (and government propaganda needs) of the era. But while we’ve come a long way since Boris and Natasha pursued Moose and Squirrel hither and thither, our narratives about Russia have, by and large, continued to look backward.

We get the occasional drama about Russian characters set in the past (like the FX’s critically acclaimed series "The Americans," about a married pair of KGB officers living undercover in 1980s D.C.), as well as occasional invocations of old-school tropes (as in "Iron Man 2," for example, a franchise resurrected from the '60s). Even well-intentioned attempts to explicitly engage with modern Russia tend to rely on these. The recent YouTube musical comedy “Russia Broadway Shut Down” imagines the effects of Russia’s recent anti-gay legislation on the “Great Red Way”; this involves many cartoonish accents and conspicuous fur hats (Harvey Fierstein wears a stole). More than 20 years after the end of the Cold War, the stories we tell about Russia still tend to be filtered through the prism of that conflict.

From a narrative standpoint, this makes some sense; the Cold War, after all, holds a good deal of dramatic appeal. It provides a basic structural backbone — yet its sheer length, global scale and complexity mean it can spawn a nearly endless array of individual stories. As a conflict, its stakes could not possibly have been higher, but today’s viewers already know how it ends. This allows us to invest in individual narratives — and to feel real suspense on behalf of individual characters — while also feeling consoled, on some level, by the certainty that the larger story has a happy ending (at least in one narrow way, and from one narrow perspective).

The Cold War is even shaped like a classic dramatic structure, with an inciting incident rising to a moment of highest tension (in the movie version, the Cuban Missile Crisis would probably need to be tweaked a bit), followed by détente as denouement; there’s a touch of the Greek-tragic in the fact that the Soviet system contained the seeds of its own demise all along. All of this makes for the kind of narrative progression that has been satisfying to audiences at least since the days of Sophocles. Who are we to resist it?

But then again, the 21st century has some good stories, too. Shows like "Homeland" and movies like "Syriana" have spun compelling plots out of history that is still ongoing, partly by making a commitment to nearly bottomless narrative — and moral — complexity. Russia’s absence from nuanced international stories like these may suggest that our attraction to Cold War narratives lies in something more than just our love of a gripping story line. The Cold War’s isn’t just any dramatic arc, after all: It’s one in which America was indisputably on the winning side — not just of a conflict, but of a historical progression.

Viewers’ knowledge of this means that Cold War stories inevitably contain a degree of dramatic irony, and that they often make use of a sort of moral-historical shorthand. None of this would work on a show like "Homeland," which, for reasons both historic and artistic, not only routinely subverts any potential stirrings of misty-eyed patriotism that the viewer might be inclined to feel, but seems to consciously situate itself well beyond the claims of any grand historical arc. Like "Syriana," "Homeland" is intent on exploration, not didacticism, and has its attention keenly focused on character.

The accepted premises in both stories tend to be not moral or political, but psychological. The narratives’ plots and the characters’ ideologies arise from a certain set of general observations: Grief can change you. Losing a child can make you unrecognizable to yourself. Everybody needs some object of devotion and some framework of belief — all the more so if there are no good options for either. Good intentions are hobbled by bad information as much as by bad intentions. If people have their limits, then entities composed of people — including institutions, societies and nations — have their limits, too.

All of this makes for piercing and important storytelling that resonates with American viewers post-post 9/11 (as its original version resonated with Israelis). But there is, after all, something morally exhausting about all of it; viewers of "Homeland" have little to root for besides individuals — and maybe the idea of better management. Perhaps that is why, when we tell stories about Russia, we tend to keep telling the same one — the one in which America co-starred, and played the good guy.

Sticking to this script is costing us more than interesting fictional stories, however. It’s also costing us opportunities to explore and attend to the reality of modern Russia, the complexities and contradictions of which do not often fit neatly into the old paradigm. It has been a long time, in fact, since the Russian government behaved according to anything like ideology, and this is something we would all do well to notice.

Today’s Russia, after all, is the country whose government granted an extended amnesty to Edward Snowden — hero to some Americans, traitor to others — possibly out of sheer stubbornness. Today’s Russia is the country whose foreign minister made a power play out of an offhand remark by U.S. Secretary of State John Kerry and, in so doing, probably prevented a war with Syria (for better or for worse). Today’s Russia spawned the post-feminist punk band Pussy Riot, which Russia’s government had arrested and then had released — moves that were ultimately both public relations stunts, though aimed at two different audiences.

There is no shortage of information about modern Russia for Americans who are interested, of course — and a growing number seem to be. This week brings not only Masha Gessen’s new book about Pussy Riot ("Words Will Break Cement: The Passion of Pussy Riot"), but two of the band’s actual members, who appeared alongside Madonna at an Amnesty International benefit in Brooklyn on Feb. 5. But dramatic narratives have a unique kind of power. And, as Vladimir Putin knows, so does television. He didn't spend $50 billion on the Olympics — four times the amount spent on London’s — in order to jump-start Sochi’s economy.  He spent it to tell a specific story about today’s Russia. It’s too bad that — at least for now — his is the only show in town.

Jennifer duBois is the author of the novels "A Partial History of Lost Causes" and "Cartwheel."