From environmental destruction to a brutal crackdown on dissent, Putin's Russia can be a scary place to live 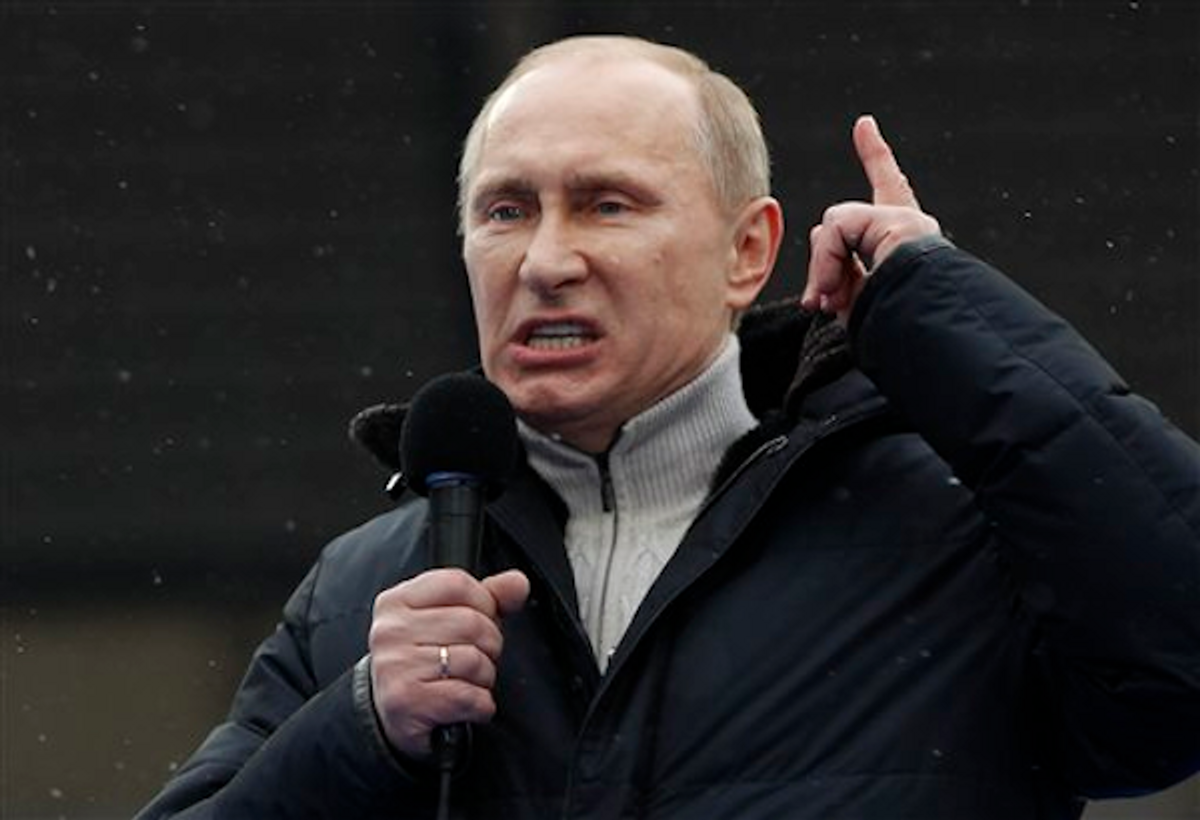 The Winter Olympics being held in Sochi, Russia was supposed to be the country’s moment in the sun, an opportunity for strongman President Vladimir Putin to bask in the glory of having the world’s eyes on his country.

“This is, without a doubt not only a recognition of Russia’s achievements in sports, it is, there is no doubt, an assessment of our country,”Putin said in 2007, in the aftermath of the International Olympic Committee’s choice to hold the games in Sochi. “This is an acknowledgment of its growing capabilities, first and foremost in the economic and social spheres.”

The world’s eyes are certainly on Russia, as hundreds of athletes from around the world travel there to compete in sports ranging from freestyle skiing to ice hockey to figure skating. But instead of acknowledging Russia’s achievements, the Sochi games have sparked a deluge of negative press aimed at Putin’s regime. (The U.S. is only somewhat better on gay rights and other issues than Russia. As Ian Ayres and William Eskridge wrote in the Washington Post, eight U.S. states have provisions similar to Russia’s anti-gay propaganda law.) From virulently anti-gay laws and corruption to crackdowns on dissent, Putin’s Russia is a dark place for many of its citizens. Here are 10 of the worst things to come out of Russia recently.

Russia’s brutal targeting of its lesbian, gay, bisexual and transgender population has attracted the lion’s share of press coverage and activist initiatives around the world related to the Olympics. The first anti-gay law passed in the Russian legislature last year and was signed by Putin on June 30. The bill bans “propaganda” about “non-traditional” sexual relations around children. It is written so broadly that it effectively bars any positive discussion of gay rights or any action labeled as gay around children. The legislation imposes fines of up to $156 for an individual and $31,000 for media organizations, and could also lead to the arrests of LGBT people.

The law also applies to foreigners. If non-Russians are seen as spreading pro-gay messages, they could be fined and detained for up to 14 days and then expelled from the country. On July 22, the first foreigners were taken into custody for violating the bill. Four Dutch citizens were arrested for filming a documentary and interviewing Russian youth on gay rights.

As Jeff Sharlet wrote in a GQ magazine cover story this month, the bill is a way of bolstering Putin’s populist credentials. The Putin-backed initiative is as much about gays as it is about “the unstable price of oil and Putin's eroding popular support...The less prosperity Putin can deliver, the more he speaks of holy Russian empire, language to which the Russian Orthodox Church thrills,” wrote Sharlet.

On July 3, Putin signed into law a bill barring gay couples from adopting Russian-born children. In addition, the legislation bans the adoption of Russian children by any parents who live in a country where marriage equality is the law. In a statement released after the bill was passed, the Kremlin said: “The measure is aimed at guaranteeing a harmonious and full upbringing for children in adoptive families.” The legislation was supported by right-wing American evangelicals like the National Organization for Marriage president.

In 2012, a law was passed targeting non-governmental organizations that receive money from abroad. It forces NGOs in Russia working on issues ranging from LGBT rights to corruption to register as “foreign agents” with the government. Since its passage, Russian authorities have investigated thousands of nonprofits suspected of being “foreign agents.” Some organizations have suffered hefty fines. A few groups that could not withstand the fines were forced to shut down over the law.

“The 'foreign agents law' was designed to stigmatize and discredit NGOs engaged in human rights, election monitoring and other critical work,” Amnesty International’s John Dalhuisen said in a statement last year. “It is providing a perfect pretext for fining and closing critical organizations and will cut often vital funding streams."

The anti-gay laws have contributed to an environment in Russia where being gay is seen as a crime. The legislation has institutionalized homophobia, and LGBT activists say the bills are encouraging violence against gays. In September 2013, the Guardian reported that activists told the newspaper, “the legislation has emboldened rightwing groups who use social media to ‘ambush’ gay people, luring them to meetings and then humiliating them on camera—sometimes pouring urine on them.” Gay teenagers have been particularly targeted.

The building of the Sochi Olympic village has thrown a spotlight on the deleterious effects to the environment that often come with large-scale projects. Forget Russia’s claims that the Olympics would be “green.” The Russian Olympic Village, the accommodation center for the Olympics, has led to the loss of wetlands that were home to 65 species of birds. Parts of the national park in Sochi, known for its diverse animal and plant life, has been destroyed. A large forest was completely wrecked.

The quality of life for residents in Sochi has decreased, with some 2,000 families forced to resettle. The dumping of construction waste and building of power lines have caused landslides, and in one village, drinking wells were destroyed. Pollution and construction have damaged the Mzymta, Sochi’s largest river. On top of all that, there’s the usual negative impact from travel, massive construction and hospitality services.

The Sochi Olympics are no anomaly: Russia’s general environmental record is nothing to praise.Oil and gas development in the Arctic have threatened indigenous people and contaminated rivers. Russia’s air is thoroughly polluted, much of it due to factories.

Corruption, including bribes, vote-rigging and abuses of power, is a major problem in Russia. Its rank on the Corruption Index, published by Transparency International, is 127, out of 175 countries ranked. Bribery is the main form of corruption in Russia. Businesses pay extra cash to the government to grease the wheels for their projects. Bribes are also used to stave off the inquiries of the government. Individual Russians are forced to bribe higher-ups to get into universities, shoo away cops or obtain passports.

The Sochi Olympics process has been laden with corruption. In January, Gian Franco Kasper, a member of the International Olympic Committee, estimated that a third of the $50 billion spent on Sochi has been siphoned off. A former Russian government official estimated that between $20-$30 billion went to embezzlement and kickbacks. Oligarchs close to Putin have received government contracts to build facilities like the ice rink and journalist center.

Russia is no haven for the press. Since Vladimir Putin assumed power in 2000, dozens of journalists have lost their lives on the job. Many were slain by contract killers, and the Russian police and judiciary have done a poor job at catching the culprits. Since 1992, at least 56 journalists have been killed.

Beyond the killings is the general harsh climate for the press in the country. Opposition bloggers have been arrested. Journalists fear gathering information from organizations the government dislikes. Visas have been denied to journalists critical of Putin.

Thousands of journalists have traveled to Sochi to cover the Olympics, but they are confronting a government bent on obstructing the press. A presidential decree made clear that “journalists will be central targets of the extensive surveillance program introduced by Russian authorities in Sochi,” as the Committee to Protect Journalists notes. Local Russian journalists “prefer to cover Sochi the way they would cover a deceased man: in a positive light or not at all... both official repression and self-censorship have restricted coverage of sensitive issues in the run-up to Sochi,” the committee reports.

The jailings of members of the band Pussy Riot and Greenpeace activists have made international headlines over the past year. Both cases highlight Russia’s relentless crackdown on activism and dissent. The recent release of Pussy Riot members, Greenpeace activists and the tycoon Mikhail Khodorkovsky, widely thought to be moves made to improve Russia’s image before Sochi, are deviations from the norm.

In June 2013, Putin signed a law mandating prison time for anybody who “insults” the feelings of religious people. Protesters who participated in a 2012 demonstration in Moscow have been targeted for jail. In the run-up to Sochi, Human Rights Watch said Russian authorities have intimidated and harassed “organizations, individuals, and journalists who criticized the local government.”

Since 2009, thousands of migrant workers from Central Asia and other countries have traveled to Sochi to assist in the building of facilities for the Olympics. But hundreds of them have been denied pay and were expelled back to their countries after they finished their construction jobs. Bosses cheated workers out of their money by underpaying them. Employers also required migrant workers to work long hours with few days off, and took away passports and work permits.

The abuse of migrant workers is part of a larger crackdown. In July 2013, authorities in Moscow started detaining people who looked non-Slavic. Thousands of people were taken into custody. Some were expelled, while others were held in prisons under inhumane conditions.

For over a decade, Russia has been engaged in its own war on terror against separatists in Chechnya and Dagestan, two mostly Muslim federal subdivisions of the country. After the collapse of the Soviet Union, separatists in Chechnya renewed their struggle for independence. Violent attacks on Russia have become an inseparable part of that struggle. The roots of their grievances lie in attempts by Russia to incorporate the republics, which are ethnically and religiously distinct from much of the country.

The first Russian war on Chechnya against separatists lasted for two years. Though the first war ended in 1996, the conflict was transformed into one between Islamist militants and Russia. The second war in Chechnya, which eventually encompassed Dagestan, was also brutal. Thousands of people, many of them Chechen civilians, were killed. Russian security forces’ conduct has been characterized by torture, executions and forced disappearances.

The large-scale wars are over for now, but Dagestan and other Northern Caucasus regions still have active Islamist groups operating, which have carried out attacks on Russia. In response, Russian authorities continue to deploy a heavy hand, especially in the run-up to Sochi.