6 nasty drugs your meat is on 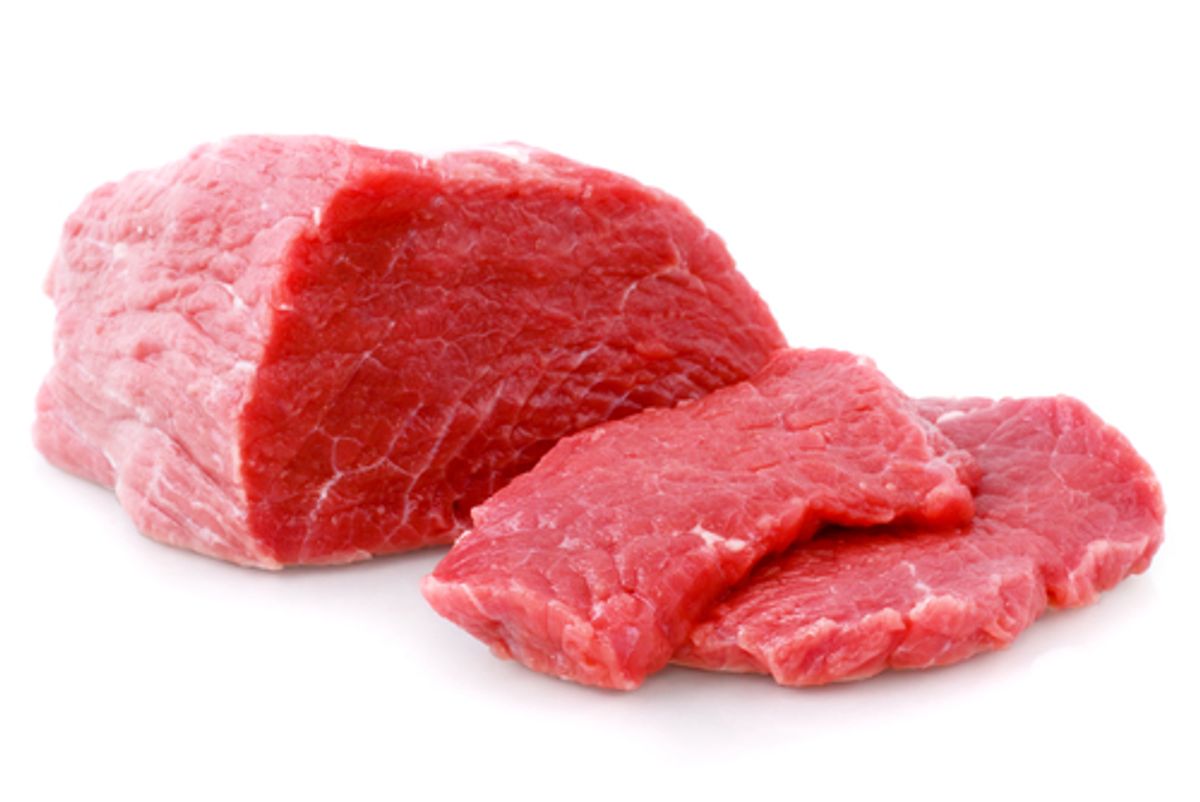 Most people are aware of Big Pharma, thanks to its advertising, but few are aware of Animal Pharma, the animal drug divisions within drug companies that sell livestock drugs by the ton. Unlike people Pharma, many Animal Pharma drugs do not require a prescription or a veterinarian and the hormones, growth promoters, feed additives and antiparasite and antifungal drugs are loosely regulated and monitored. The USDA tests for residues from the drugs in meat, poultry and egg products but repeat offender farms that release animals with violative drug residues into the human food supply are identified weekly.

Among the drugs found in beef released to the public in a USDA Inspector General report were penicillin, the antibiotics florfenicol, sulfamethazine and sulfadimethoxine, the antiparasite drug ivermectin, the nonsteroidal anti-inflammatory drug flunixin and heavy metals. Some drug-contaminated meat was released into the human food supply and there was no attempt at a recall, says the report.

The highest of all veterinary drug residues are found in bob veal (calves under three days old that weigh only 70 to 100 pounds) says the USDA Inspector General report, because “Farmers are prohibited from selling milk for human consumption from cows that have been medicated with antibiotics (as well as other drugs) until the withdrawal period is over; so instead of just disposing of this tainted milk, producers feed it to their calves. When the calves are slaughtered, the drug residue from the feed or milk remains in their meat, which is then sold to consumers.” Meat from bob calves is put into “value added” veal products like veal sausages and breaded veal patties.

Is there any other food that is so dangerous and cruel at the same time?

There were an astounding 211 drug residue violations from just four plants, says the report, because “individuals who have a history of picking up dairy cows with drugs in their system and dropping them off at the plant” are widely tolerated. For example, Golden Jay Dairy in Tulare, CA had three violations in 2013—all for residues of the antibiotic neomycin in bob veal.

The grassfed beef movement and mad cow scares have made people think more about what "they eat eats," but few ask about the drugs the animal ingested. Unlike bacteria like E. coli, salmonella or listeria, drug and metal residues aren’t neutralized by cooking and some actually break down into more harmful compounds when heated. Here are some drugs that are probably lurking in your meat.

The misuse of antibiotics on industrial farms to maximize profits at the expense of human and animal health has been well covered by news outlets. However, the FDA's December initiative against farm antibiotics was poorly covered. "F.D.A. Restricts Antibiotics Use for Livestock," wrote the New York Times. "The FDA is cracking down on antibiotics on farms," wrote theWashington Post.

In point of fact, the "crackdown" was a watered-down plea for Animal Pharma to self-police and voluntarily change the indications on its antibiotic labels which the FDA would then enforce. Does anyone believe industry would voluntarily give up profits? (FDA's caving to industry on antibiotics is similar to the USDA's Hazard Analysis and Critical Control Points, HACCP, in slaughterhouses, in which industry devises its own rules and enforcement which the government then ratifies as in "honor system.")

Less than a month after the FDA's faux antibiotic initiative, a report from the Natural Resources Defense Council report revealed that 26 of 30 antibiotics approved for use in livestock feed failed the FDA's own safety tests, yet are still in use. "The FDA continues to knowingly allow the use of drugs in animal feed that likely pose a 'high risk' to human health," said Carmen Cordova, a microbiologist and lead author of the report. "That's a breach of their responsibility and the public trust."

There is good news and bad news when it comes to the asthma-like growth stimulants Big Meat has been using behind the public's back—like Paylean for pigs, Optaflexx for cattle and Topmax for turkeys. Thanks to public outrage about the human and animal risks associated with the drugsand the EU and Russia's unwillingness to import treated meat, the government may debut a"ractopamine-free" designation.

The bad news is that a related drug, Zilmax, is even more harmful to animals. The hooves on cattle given the drug were "basically coming apart," said Keith Belk, a professor of animal science at Colorado State University who viewed photos of lame cattle at Tyson Foods Inc. slaughterhouse in southeastern Washington state in August, some of whom were euthanized. The next day, Tyson told its feedlot customers it would stop accepting Zilmax-fed cattle, and Merck temporarily suspended Zilmax sales. Hoof loss on Zilmax has been known since 2006 but Animal Pharma did not act until the inflammatory video. Still, despite FDA reports of 285 US cattle dying unexpectedly or being destroyed after being fed Zilmax and 75 animals reported who lost hooves, 94 with pneumonia and 41 with bloat, Merck said in December it would reintroduceZilmax. And there is more bad news. Thanks to the drought, US farmers are actually increasing the use of growth-stimulating drugs like ractopamine.

Like drugs like ractopamine, the EU wants nothing to do with US beef because it is produced with so many hormones. Yet Animal Pharma drugs like oestradiol-17, zeranol, trenbolone acetate and melengestrol acetate are hardly names US food consumers recognize. Melengestrol acetate, a synthetic progestin put in feed, is 30 times as active as natural progesterone, says the European Commission (EC) and trenbolone acetate, a synthetic androgen, is several times more active than testosterone.

In September the journal Science reported trenbolone acetate "does not fully break down in water as previously believed…but retains enough of a chemical residue to regenerate itself." The European Commission's Scientific Committee on Veterinary has noted "an association between steroid hormones and certain cancers and an indication that meat consumption is possibly associated with increased risks of breast cancer and prostate cancer,” adding that the highest rates of breast and prostate cancer "are observed in North America, where hormone-treated meat consumption is highest."

Zeranol is also concerning. Workers  exposed to zeranol had a "variety of reported breast symptoms, including sharp pain, tingling, burning, aching and irritation," says a 2010 paper inExperimental and Therapeutic Medicine. Two children exposed to zeranol through "their parents workclothes" developed breast growth and unusual growth spurts, say the authors. Zeranol or its metabolites "is a risk linked to breast cancer development."

Drug residues in the US meat supply are overseen by the USDA's Food Inspection and Safety Service (FSIS), the FDA, and to some extent, the EPA. But according to a scathing 2010 reportfrom the USDA Office of Inspector General on drug residues in cattle, pesticide monitoring is disturbingly lax. Of 23 pesticides known to be “high risk,” FSIS tests for only one, accuses the OIG report, and some dangerous compounds like the pesticides dioxin, lindane and ﬁre retardants called PBDEs (polybrominated diphenyl ethers) have no “established action levels” to test for.

There are clear human risks from exposure to pesticides. Researchers at the University of California, Berkeley and Columbia University in New York are identifying impairments of children exposed in the womb to high levels of chlorpyrifos or other organophosphates used on the farm, says a recent article by Amanda Mascarelli. These impairments may include cognition, behavior and developmental problems, lower IQs and problems in gender differentiation. Many pesticides are endocrine disrupters which disrupt sex hormones says scientists.

There was a time when people thought of seafood as purer or safer than meat and poultry. Today aquaculture operations are so festooned with environment and animal-harming chemicals, they actually make factory farming look green. Shrimp ponds are treated with "heavy doses of chemicals such as urea, superphosphate, and diesel. Then the shrimp receive pesticides, antibiotics (some that are banned in the U.S., but used overseas), piscicides (fish-killing chemicals like chlorine), sodium tripolyphosphate, borax, and caustic soda," says a recent article.

In 2007, representatives from 17 countries on five continents decried the "antibiotics, hormones, pesticides and other chemicals that are used in the various phases of shrimp production" and the attendant "environmental degradation, loss of biodiversity, loss of peoples’ livelihoods, cultural diversity and security, and violation of human rights including murder."

There is another fish drug problem closer to home. Fish in the Saint Lawrence, the major waterway connecting the Atlantic Ocean to the Great Lakes, are under the influence of antidepressants like Prozac, thanks to the huge amount of the population taking the drugs and excreting them into the sewage system.

It is a "flat, slow-moving green thing about three quarters of an inch long with cilia all around the edge, like a huge paramecium, that got into the cow through its drinking water." That's how Ted Conover describes the liver fluke, in a Harper's magazine expose he wrote about going undercover as a US meat inspector. When Conover's co-worker sees the fluke, she "grabs the U.S. INSPECTED & CONDEMNED stamp, which sits in a well of blue ink attached to the side of the table, and stamps the liver once. That signifies to the workers downstream that the liver is not suitable for human consumption but is still okay for things like cat food."

Few people realize that cattle host liver flukes, eyeworms, lungworms, stomach worms, thin-necked intestinal worms and whipworms, but the parasiticides that kill them are also alarming. "This product should not be applied to self or others because it may be irritating to human skin and eyes and absorbed through the skin, says the label for the widely used Ivermectin. "To minimize accidental skin contact, the user should wear a long-sleeved shirt and rubber gloves. If accidental skin contact occurs, wash immediately with soap and water."