Human workers are an increasing annoyance for the world's largest electronics manufacturer. Help is on the way 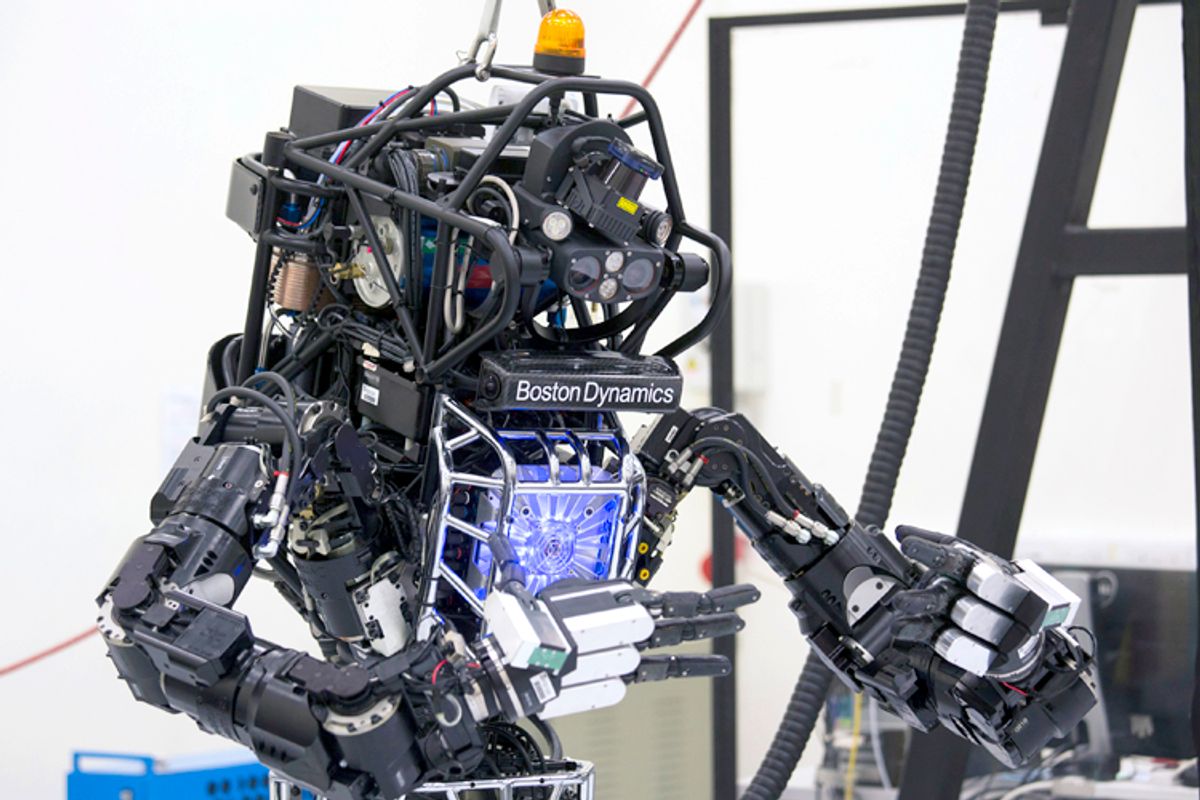 This is how the world ends: Not with a bang, but with an eight-word Wall Street Journal headline: "Foxconn Is Quietly Working With Google on Robotics." Prepare to meet your new robot overlords.

Of course, if I were writing a science fiction novel in which intelligent machines take over the world I'd probably consider it a cliché to suggest the rise of the bots hit the tipping point after a collaboration between one of the world's most advanced manufacturers of electronic gear and one of the world's most aggressively forward-looking software companies. I'd be more inclined to suggest something more exciting and exotic -- like Facebook's News Feed algorithm becoming so complex that it ushered in the Singularity, or a Pentagon virus designed to destroy Iraq's nuclear reactors disastrously merging with Russian malware.

But the more mundane path forward is always the more likely. Foxconn, the Taiwanese manufacturer of electronic goods famous for its town-size assembly plants, suicidal workers and Apple supply line prowess has made it clear for years that it wants to upgrade from humans to robots. Google has recently been making a big push in both artificial intelligence and robotics. Together, the two companies are perfectly positioned to push the state-of-the-art. Amazing things are bound to happen.

Or seriously troubling things. The big question about Foxconn and Google isn't actually whether Skynet is around the corner, but what impact further robotics advances will have on the labor market. Humans, apparently, are a pain in the ass for Foxconn.

The cooperation comes as Foxconn has been striving to accelerate automation efforts at its factories amid challenges of rising labor costs and workplace disputes in China, where it has more than a million workers....

“Foxconn needs Google’s help to step up automation at its factories as the company has the lowest sales per employee among the contract makers, given its large workforce,” said Wanli Wang, an analyst at CIMB Securities. “Using robots to replace human workers would be the next big thing in the technology industry..."

As has been noted here many times before, a growing number of economists are worrying that increasing automation is no longer guaranteed to float everyone's boat, and may actually be contributing directly to rising income inequality. It's hard to think of a better real-world test of this thesis than an experiment involving one of the world's biggest manufacturers and one of the world's cleverest software companies. The further we go down this road, the bigger the policy challenges we will face.

Ironically, a comment on the Wall Street Journal article that perfectly recapitulates the fun-house mirror world that so many conservatives currently live in points to one possible way out of our looming robot labor mess.

"Just think, soon the workers in developing countries won’t be needed in the sweatshops. The workers might not be so happy about the change, but liberals will be. Just like the people “liberated” from work by Obamacare, these workers will be free to become artists, poets, and community organizers."

This comment is absurd on multiple levels, not the least of which is the fact that liberals are very worried about the impact of automation on jobs, while conservatives tend to content themselves with the mantra that was true of the early Industrial Revolution -- automation equals increased productivity equals faster economic growth equals more prosperity for everyone -- will be true of what's coming down the pike in the 21st century. Then there's the sarcastic comment about Obamacare "liberating" people, as if the fact that having your healthcare tied to your job isn't hugely constrictive of individual freedom.

But therein lies the way out. One promising way to fend off competition from robots is to boost the safety net to the point that we don't need to slave away on assembly lines to pay for our room and board. Comprehensive healthcare, guaranteed basic income, industrial strength Social Security -- that's what liberals will demand from our new robot overlords.

And if they're truly artificially intelligent, they'll give it to us.