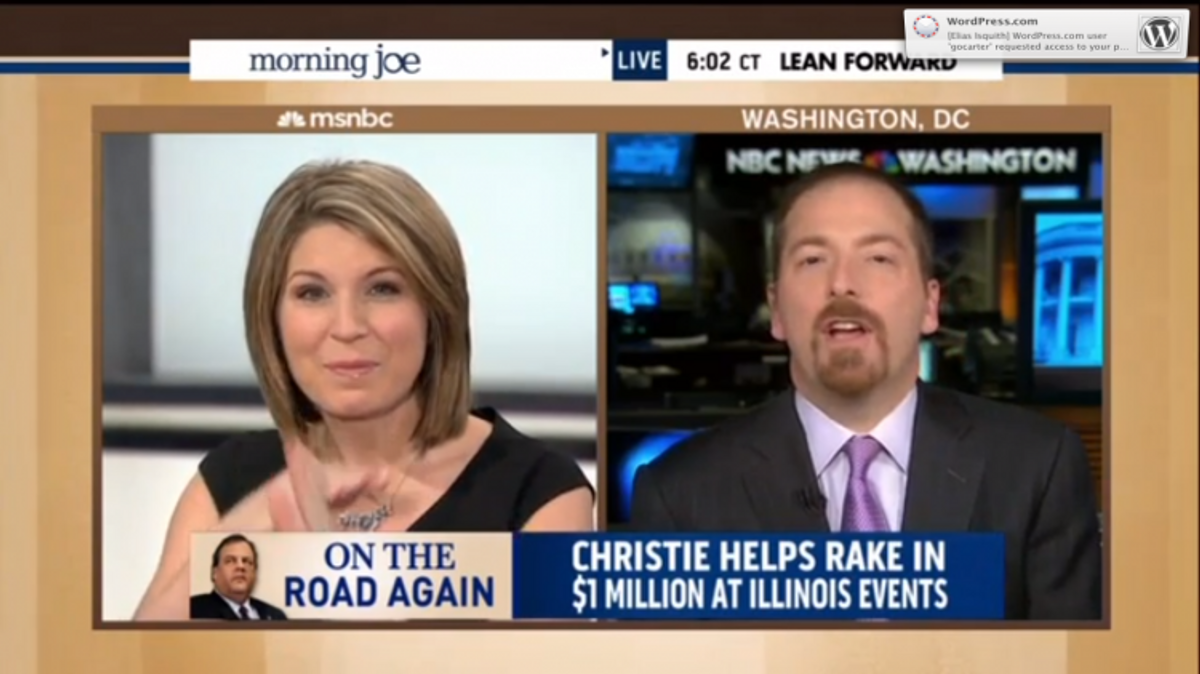 Besides his immediate family, it's unlikely that any group of people are more ardent fans and defenders of New Jersey Gov. Chris Christie than the folks on MNSBC's "Morning Joe." (See my colleague Alex Pareene for more on this phenomenon.)

Yet while it's usually host Joe Scarborough or co-host Mika Brzezinski manning the barricades for Christie, Wednesday morning saw former Republican operative Nicolle Wallace go off on an extended rant about how inspiring New Jersey's governor is and how unfairly he's been treated by everyone else at MSNBC.

Todd continued to ramble on for a bit before he was interrupted by Wallace, who moaned, "Come on! Oh, my god!"

Todd then figured out what he was trying to say: "I guess it's a good day that — what? — that he didn't get, that more indictments didn't come in?"

"Rachel's not on till 9, Chuck," she snarked, implying Todd was being a partisan Democrat, like MSNBC host Rachel Maddow.

At that point, Todd began backtracking and trying to assure Wallace that he, too, felt the media was being unfair to Christie. "We're doing feeding frenzy on somebody who — we're not actually like sitting back and — we're overdoing it now," Todd said. "I think everybody's just trying to will him back into something."

Wallace then unleashed a lengthy paean to Chris Christie's resilience, fortitude, professionalism and all-around awesomeness in the face of an anti-Christie partisan media:

I can't think of a politician in either party who has remained more focused on his day job, despite the fact that every single, you know, formerly objective member of the political press is coming after him. And the fact that it doesn't at least warrant as much attention that he has a day like yesterday where he speaks more eloquently about income inequality, an issue that I think on your show you spent a good deal of time talking about, is a nothing burger to you is to me something that should educate Governor Christie about the climate he’d face should he run for president.

Wallace continued to lecture Todd about how, "as a journalist," he should cover Christie, while Todd continued to stutter before complaining that Scarborough's original question was "weird."

You can watch Wallace attack Todd's professionalism below, via Talking Points Memo: