Teaming up with Ken Cuccinelli to sue the NSA, he’s accused of stealing the lawsuit from another lawyer 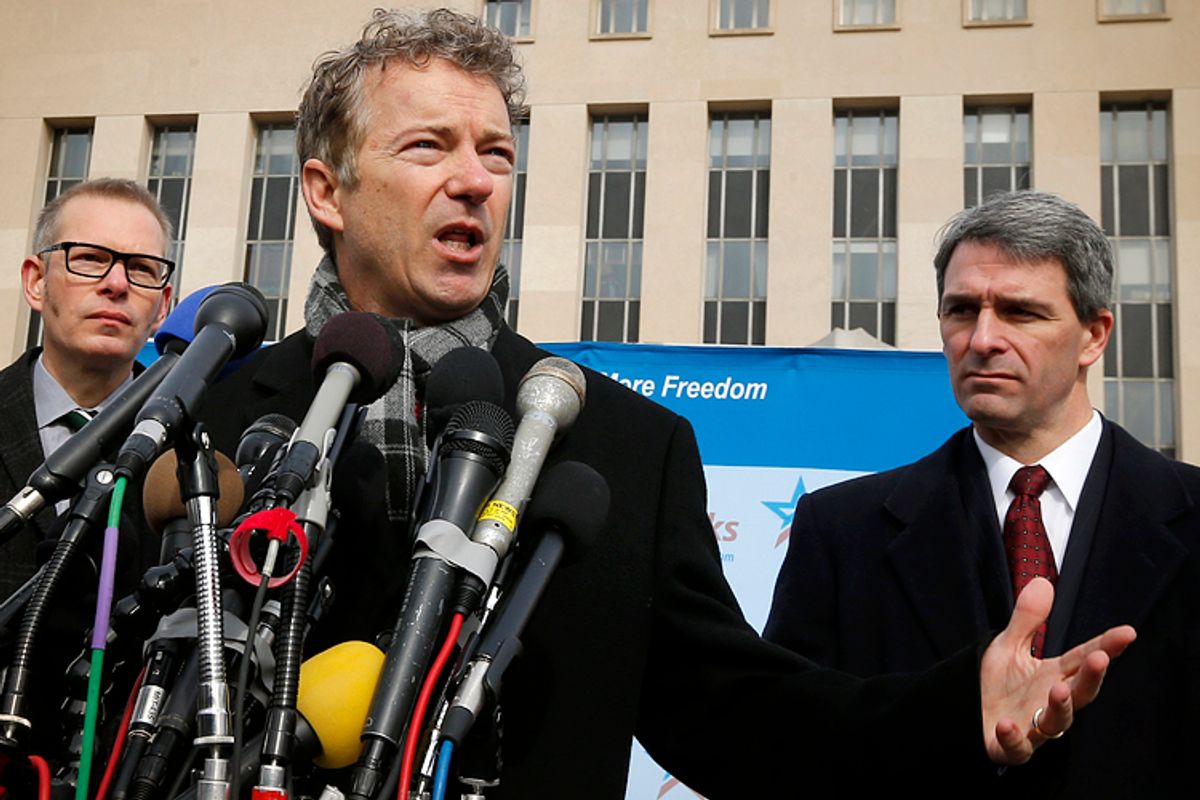 You can’t make this stuff up. Sen. Rand Paul, who endured a multichaptered scandal involving his plagiarizing speeches and book chapters, is now accused of stealing the work of constitutional lawyer Bruce Fein for his lawsuit against the National Security Agency. Fein's ex-wife and spokesperson made the charge Wednesday, though Thursday Fein said it wasn't true.

Equally interesting, Paul replaced Fein as his legal partner with Ken Cuccinelli, the former Virginia attorney general who lost his race for governor to Terry McAuliffe. Nothing says “liberty” like the Cooch, especially for women. Cuccinelli is an antiabortion zealot, opposed to exceptions for rape and incest. He supports personhood legislation that could criminalize some forms of birth control and opposes public funding for contraception. He also pushed to reinstate Virginia’s anti-sodomy laws after a court struck them down.

A side question for Paul and other libertarians: Why are they usually most agitated to protect the liberty of straight white men?

The Washington Post’s Dana Milbank broke the news of the allegedly purloined lawsuit. He saw both documents and found whole passages had been lifted from Fein’s work. “Except for some cuts and minor wording changes, they are clearly the same documents,” Milbank wrote.

“Ken Cuccinelli stole the suit,” Mattie Fein, Fein’s ex-wife and spokeswoman, told Milbank.  She noted that Paul, who “already has one plagiarism issue, now has a lawyer who just takes another lawyer’s work product,” adding, “I am aghast and shocked by Ken Cuccinelli’s behavior and his absolute knowledge that this entire complaint was the work product, intellectual property and legal genius of Bruce Fein.”

But on Thursday RANDPAC forwarded an email from Fein disputing his ex-wife's version of the story.  “Mattie Lolavar was not speaking for me,” Fein said in the email," according to MSNBC. “Her quotes were her own and did not represent my views.  I was working on a legal team, and have been paid for my work.”

Swapping Fein for Cuccinelli wasn’t the only change in strategy. Fein’s version listed Democratic Sen. Mark Udall as a co-sponsor; he was replaced by the Tea Party group Freedom Works. Fein’s suit also named the attorney general and defense secretary as defendants; they were replaced by ... PRESIDENT BARACK HUSSEIN OBAMA. That's an exciting flourish for the Tea Party faithful. Mattie Fein called her ex-husband an independent Republican. “You can’t really call him a Tea Party person,” she told Bloomberg Businessweek.

There already were lots of questions about the lawsuit before the Cuccinelli-for-Fein trade became public. It was a project of Paul’s political action committee, not his Senate office, making it look more like grandstanding than policymaking. It duplicates efforts by Larry Klayman’s Judicial Watch. And it’s been delayed for months. There was also the small matter of Cuccinelli not being a member of the Washington, D.C., bar.

Cuccinelli apparently worked to keep the Fein allegation from becoming public, complaining in an email to Fein that  “our clients don’t want the lawyers to become the story.” Mattie Fein replied, calling Cuccinelli “dumb as a box of rocks,” which led the failed gubernatorial candidate to conclude:  “I think this relationship is untenable.”

I think Rand Paul’s presidential hopes are untenable too. Every time the guy tries to do something statesmanlike, his opportunism and essential unseriousness get in the way. Partnering with Mark Udall to challenge the NSA would have been an important move. Instead, the suit has become a sloppy Tea Party cut-and-paste job -- just like Paul's whole career.

Paul canceled a conference call with reporters to discuss the suit Wednesday.

This story has been updated to reflect Fein's denial.