The Can Kicks Back is confronting both funding and identity crises 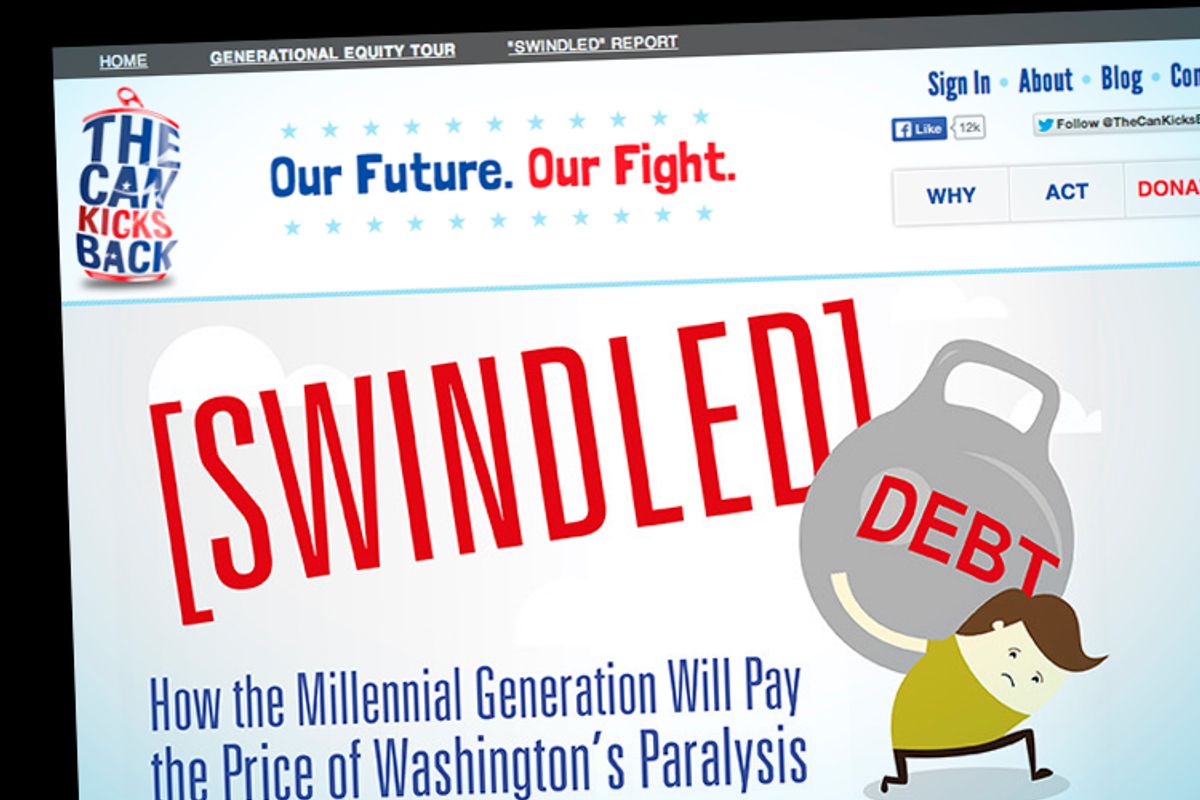 Everyone is having a bit of a laugh today at the expense of "The Can Kicks Back," the youth-oriented affiliate of the group known as "Fix the Debt," which is yet another of the many organizations funded by single-minded deficit hawk billionaire Pete Peterson, along with a few of his similarly wealthy peers. The Can Kicks Back, which was supposed to nurture a youth movement to support Peterson's goal of social insurance cuts and tax reform, now finds itself "nearly broke," according to various internal documents obtained by Politico's Byron Tau. As of November: "The group’s cash reserves were down to $70,000, with more than $75,000 in outstanding donor commitments ..." And they're having trouble with the fundraising.

One fundraising problem The Can Kicks Back has faced is the entirely accurate perception that it is not actually a grass-roots organization of young people deeply concerned with reckless entitlement spending and unsustainable long-term debt, but rather yet another front group -- and in this case a particularly ineffective one -- for the small network of billionaires who have spent decades advocating tax cuts and the rolling back of Social Security and Medicare benefits, in the name of fiscal responsibility. It turns out that most young Americans, being members of a generation that has had some trouble with the job market, don't care about the federal government's 30-year debt projections as much as they care about "having enough money for food and rent."

So when The Can Kicks Back found itself struggling to keep the lights on, it turned for support to its grass-roots network of passionate millennial activists:

Not that the group hasn’t tried. According to emails, it also took meetings or made fundraising asks of former oil and gas executive T. Boone Pickens, aerospace magnate Norman R. Augustine and First Pacific CEO Bob Rodriguez, among others, since 2012.

Oh, weird. None of those people are millennials at all! That is sort of just a list of very wealthy people. It's almost as if the national debt is only a major concern of people too rich to have other problems.

According to these internal documents, which The Can Kicks Back apparently left in a publicly accessible Google Group, the group demonstrated an amusing lack of self-awareness about its own composition and mission:

But the group also worried about its own public perception and internal diversity issues.

“As everyone is aware, our team is all white and 75% male … made all the more glaringly obvious now by the photos on the about page,” Eisenstadt wrote in an email in September 2012. “I strongly suggest we develop a plan to address this in the next couple weeks before we get branded as something we are not.”

They haven't had a huge amount of success on the diversity front since then. As for the "old white guys," please note that The Can Kicks Back's advisory board includes Erskine Bowles, Alan Simpson, Evan Bayh and David Walker.

That's the story these documents tell over and over again: an organization struggling to prove that it is not what it very clearly is.

In response to a 2012 Slate piece by reporter Dave Weigel linking The Can Kicks Back with the billionaire anti-debt activist Peter Peterson, Eisenstadt argued that the group should request a correction — saying that the perception that they are Peterson-funded was hurting their credibility, according to an email thread.

“Technically one can make an argument that we are …,” Parent wrote back in an email. “We receive most of our money from [Committee for a Responsible Federal Budget], which has received large amounts of funding from Peterson.” Slate never appended a correction to the piece.

I actually sort of feel sorry for these dimwits. I mean I feel more sorry for the people whose lives would be made measurably worse by the policies they all get paid to advocate for on behalf of idiot billionaires but these guys get a bit of sympathy too.