Skaters celebrate, a skiier recovers, and a dad wears an awesome hat 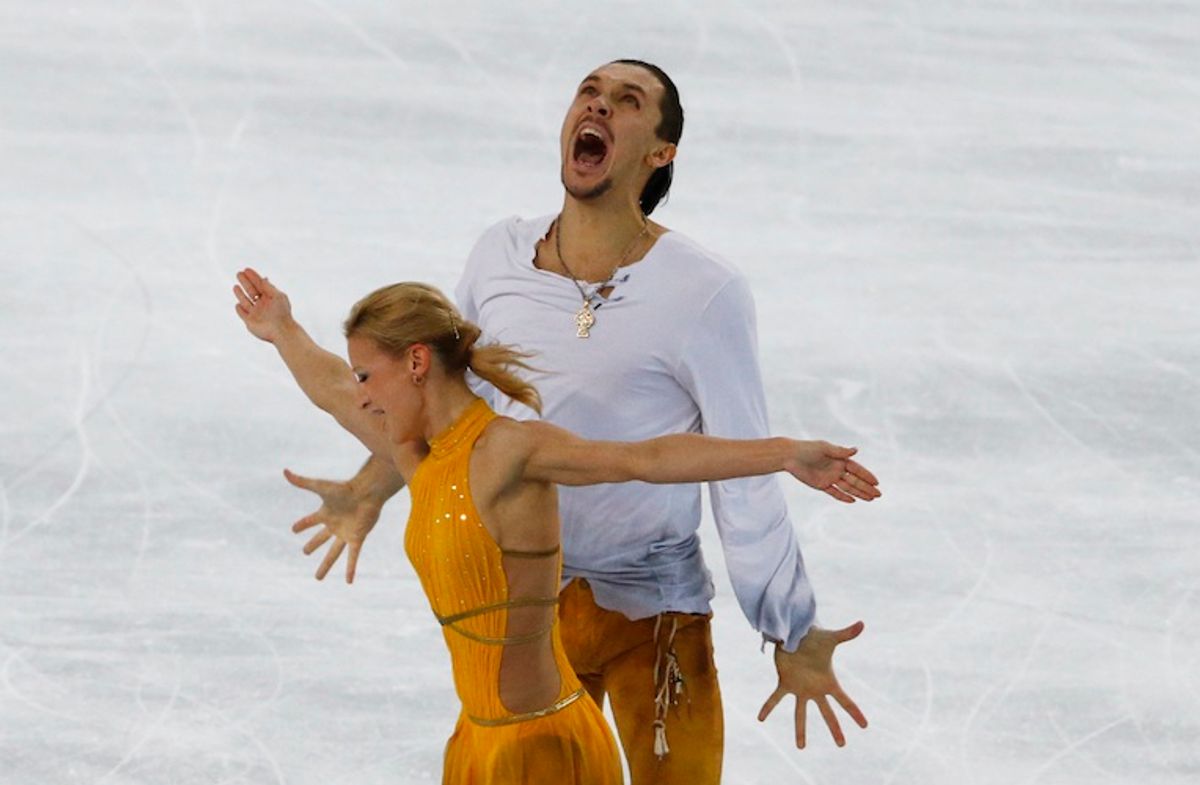 Thank God for Russian figure skaters. Thank God for their grace, for their capacity to land massive triple jumps and for their decision to skate to the music of “Jesus Christ Superstar,” which surely prompted many people watching the gold-medal-winning routine by Maksim Trankov and Tatyana Volosozhar to shout: “Jesus Christ -- super skate!”

Or maybe that was just me.

The point is that pairs skating was the highlight of Wednesday’s prime-time Olympics coverage, bringing much-desired drama to an NBC broadcast that, at times, felt a tad dull.

The women’s halfpipe got interesting, but only after 11 p.m., when the competitors were in the final round and throwing down jumps with medals on the line. The men’s 1,000m speed skate, shown early in the evening, wasn’t exactly gripping, especially for American supporters hoping to see Shani Davis earn his third gold medal in this event. He didn’t earn it; unfortunately, he ended in eighth place. “It just wasn’t inside of me today,” he said during a post-competition interview.

That elusive “it” was inside of some other people last night, though, and not just the Olympians who won medals. With that in mind, here are the heroes of the Wednesday prime-time Olympics broadcast. (Yes, this list will heavily feature figure skaters.)

Maksim Trankov and Tatyana Volosozhar: The gold medal Russian duo performed an undeniably powerful program, but their reaction after the fact was equally powerful. As soon as they finished and realized their performance had been nearly flawless, the weight that lifted off their shoulders was almost physically visible. Volosozhar started weeping. Trankov screamed and dropped to the ice like Brandi Chastain after scoring a game-winning, gender-empowering goal. NBC sportscaster Tom Hammond got so excited that he started nonsensically comparing the two skaters to caviar and vodka. It was all pretty extraordinary.

Prior to their triumphant skate, NBC aired a video segment about the pair in which Trankov said they were just friends, but also implied that romance could develop after the Olympic games are over. Translation: After winning the gold medal, those two totally had sex.

Boris Shnapir: U.S. pair Marissa Castelli and Simon Shnapir attempted a quadruple salchow that Castelli couldn’t quite land. But nevertheless, Shnapir’s dad, Boris, sat in the stands, proudly wearing a glittery Uncle Sam hat. Because that, my friends, is what winning looks like.

Pang Qing  and Tong Jiang: The Chinese skaters, who won silver at the 2010 winter games, tried for another medal but didn’t quite pull it off; they ended the pairs skate in fourth place. Given that they plan to retire post-Sochi and finally get married after putting their wedding plans on hold, it was extra-bittersweet to watch them skate in competition for a final time. And since they skated that final time to “I Dreamed a Dream” from “Les Miserables,” it’s extra-understandable if you teared up a little.

Aliona Savchenko and Robin Szolkowy: The German figure skaters had some problems in their final skate. He fell early on, and when they attempted a triple axel throw at the end of their program, her backside landed on the ice. But -- and this is what is amazing about Olympians -- they kept going despite the setbacks. Me? As soon as Szolkowy hit the ice that first time, I would have shouted “Ta-ta, judges!” and slid off to the nearest open bar.

Stefan Groothuis’ parents: It was impressive that Groothuis, the Dutch speed skater, won gold in the 1,000m. But his parents’ extreme level of T-shirt planning was even more impressive. While their son was competing, both Mom and Dad wore shirts that said, “Stefan Go.” Then, once he secured that medal, they changed into shirts that read, “Stefan Gold.” If they can somehow combine their T-shirt organization with Boris Shnapir’s glitter-hat-wearing consistency, they might really have something there.

Marie Marchand-Arvier’s fall recovery: The French downhill skier took a really nasty spill on her run, one that looked like it could have caused serious bodily harm. But just like snowboarder Sarka Pancochova, the woman who cracked her helmet during the slopestyle event, Marchand-Arvier managed to get up and recover fairly quickly. Honestly, these women, and everyone else who bites the Sochi dust and lives to tell about it, are the Chumbawumbas of the 2014 Olympics.

Dominique Gisin and Tina Maze: There was an unprecedented tie in women’s downhill skiing, one that allowed Switzerland’s Gisin, veteran of nine knees surgeries, and Slovenia’s Tina Maze to tie for gold. NBC’s video segment on Maze emphasized her status as an idol in her home country, where she’s revered as an athlete and a pop star whose song “My Way Is My Decision” became a major hit. (That song also generated a music video that vaguely resembles the “What I Am” video that Marnie made on “Girls.”) Basically, Maze is like the Beyoncé of Slovenia. Can you imagine if Beyoncé was in the freakin’ Olympics? People would plotz. Hence, all of Slovenia is probably plotzing as we speak.

Kaitlyn Farrington, Torah Bright and Kelly Clark: These are your three medalists, from gold to bronze, in the women’s halfpipe. I mention all three of them as a unit because, as I said previously during the slopestyle snowboarding competition, I am amazed at how supportive these women seem to be of one another and how much they take the competition in stride. I’m pretty sure that little shimmy Torah Bright does must ward off evil spirits.

Bob Costas: Once again, the eye-infected Costas was absent from the NBC telecast, with Matt Lauer filling in for him. Nevertheless, to show our support, it only seems right to call him a Wednesday night Olympic winner. In fact, to anyone who normally wears contacts: let’s all wear our glasses tomorrow as a show of solidarity with Costas, who continues to fight for his pupils’ lives. After all, we’re all in this together. And together, we can beat this thing.