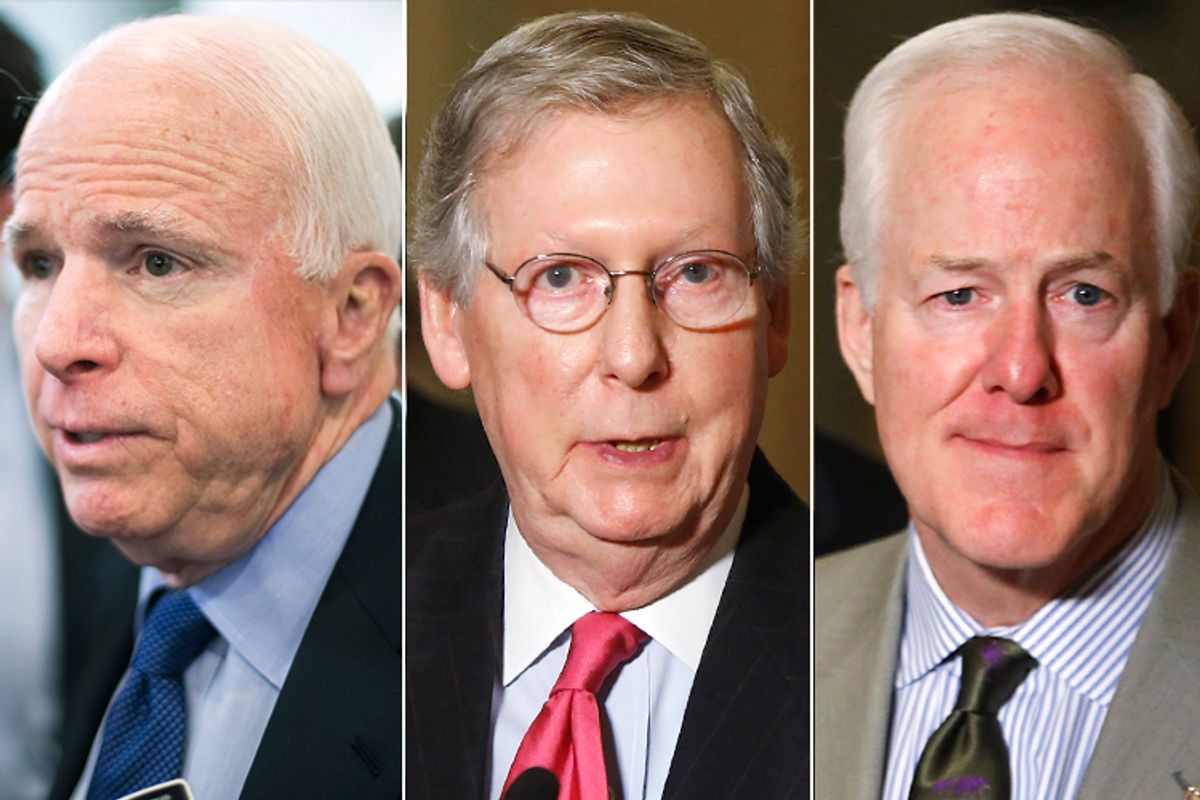 Brian Beutler got this entirely right on Thursday, but there’s more to be said about the debacle in the Senate this week, when GOP leaders were forced to vote to move forward with a bill to lift the debt ceiling after saboteur Ted Cruz filibustered it. Having made the world safe for Democrats to do the right thing and vote for the bill, all 43 Republicans then voted against it (two didn’t vote at all).

I dislike Cruz as much as the next sensible person, but I actually think we owe him some gratitude, for exposing the charade at the heart of modern Republican politics today: the desire by Republicans, reluctantly abetted by Democrats, to avoid the wrath of Tea Party crazies and pretend they don’t want to do things like lift the debt ceiling, when in fact they know it’s essential.

The cowardly strategy apparently even has a name: “Vote No, Hope Yes,” in which Republicans vote against a common sense solution to a stalemate – like the deals to avoid the fiscal cliff last January, or to reopen the government in October – while actually hoping the measures pass by the grace of Democrats.

This cynical and dangerous approach to politics actually went to new lows on Wednesday, when McConnell asked to waive the normal procedures of the Senate and let his colleagues vote silently, so no one would know how close Ted Cruz came to winning – and the rest of us came to losing. With financial markets on the verge of panic, Republicans “dropped the parliamentary equivalent of a curtain on the voting as it was in progress,” in the words of Associated Press writer Andrew Taylor.

Instead of the normal process of verbal “ayes” and “nays” recorded by the Senate clerk (and C-SPAN), senators could quietly indicate support with no roll-calling or record, just the informal vote-counting of leadership. When the only reliable members of the GOP sanity caucus, Susan Collins and Lisa Murkowski, balked at giving McConnell and others cover for their “Vote No, Hope Yes” dishonesty, the GOP minority leader was forced to scramble to get to 60 votes. That’s when McConnell switched his vote from no to yes, as did top deputy John Cornyn, also facing a Tea Party primary battle. Then another 10 Republicans followed suit. And then they all voted against the actual bill.

It was a bad day for political integrity and transparency. "We were very disappointed that Wednesday's change in Senate voting protocol kept us from giving the public real time access to this key vote," C-SPAN's vice president of programming told AP. "The tactic certainly gives the concept of legislative transparency a black eye."

Why is it unthinkable for any Republican to simply say to his or her constituents: “I think the federal government is too large, but the time to address that is budget time, not by threatening to default on our debt.” Voting against a hike continues to encourage the idea that the debt ceiling is still “a hostage worth taking,” as McConnell himself chortled in August 2011, back when the game was still fun.  It plays into the Tea Party narrative that this is handing “a blank check to Barack Obama” rather than paying bills Congress already incurred.

So I’m having a hard time praising McConnell’s “courage” in voting for cloture. To me, House Speaker John Boehner deserves marginally more credit because at least, in the end, he was among only 28 Republicans who joined House Democrats to vote for the bill -- which was "the lowest percentage for a majority on passage since the House began publishing electronic data on votes in 1991," according to the New York Times. I think McConnell’s basically getting what he deserves: Tea Party crazies are seeing through what he did, and loons like Brent Bozell and Erick Erickson are braying louder for his defeat by primary challenger Matt Bevin. Until Beltway mandarins stop praising maneuvers like McConnell’s as courage, a destructive Tea Party minority will hold progress hostage.