Sochi Olympics: A skater recovers, a skier drops his pants 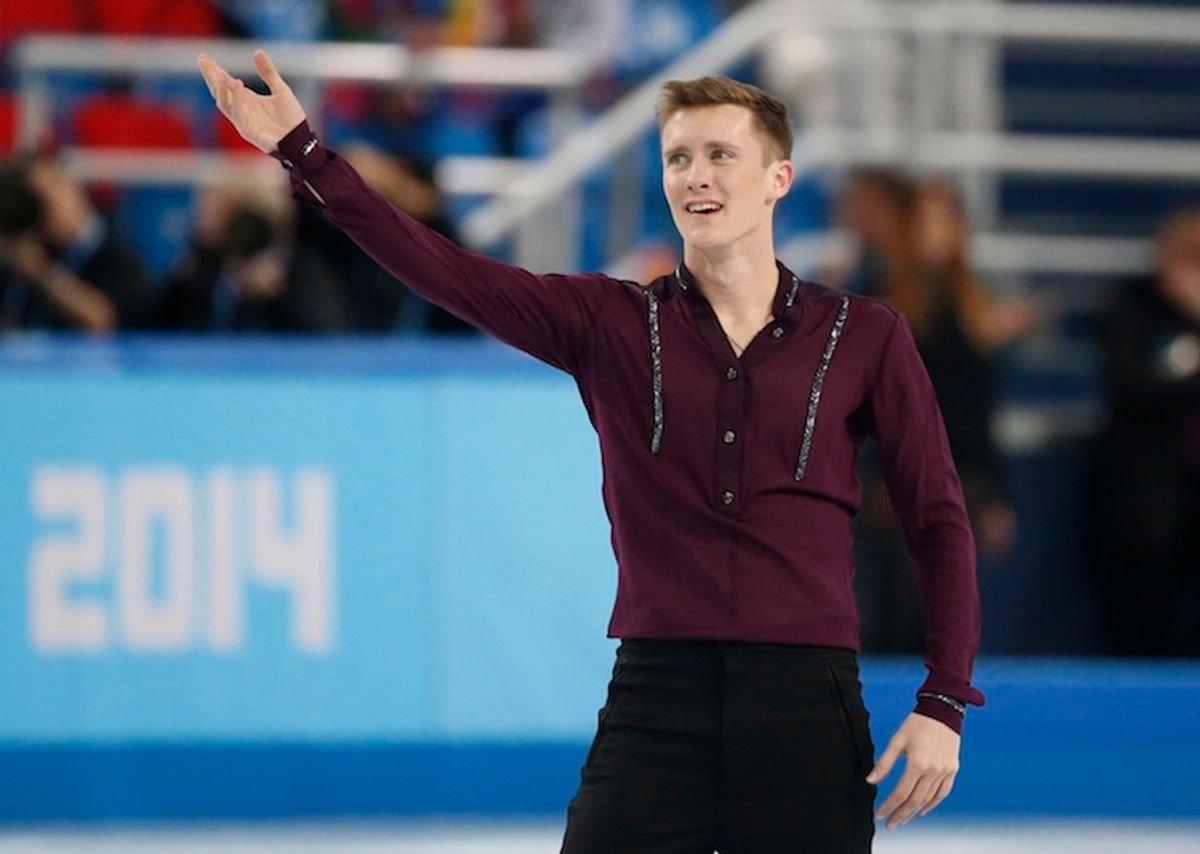 “There’s a lot of drama in this building tonight,” Scott Hamilton said during the men’s figure-skating competition that aired Thursday night on NBC. It was true. There was.

It was also true that if you either watched NBCSN’s live coverage of the men’s short program earlier in the day or had Internet access of any kind, you probably already knew about some of that drama. You had some sense, well before prime time, that Evgeni Plushenko, the Russian Magic Mike, withdrew from the competition due to back problems, allegedly closing the curtain on his Olympic skating career as a result.

But even though most of us were likely aware of this, NBC acted like we weren’t, hyping up Plushenko as one of the skaters we’d be seeing later in the broadcast. Prior to showing his official bow-out, NBC lauded Plushenko with a segment that celebrated how he “changes the air in the room” and is a “spectacular” skater. Then came those close-ups of the huge surgery scar in his back, and the Russian guys lifting up his shirt while staring pointedly at the camera as if to say, “See? Injured.” It wasn’t until after a wrenching triple axel that Plushenko glided over to the referee table and officially withdrew himself for medical reasons.

Referring to the Plushenko team’s emphasis on that aforementioned scar, Hamilton said, “At first I thought that was a little bit of theater.” But then Hamilton added that it was obvious Plushenko was in pain. Plushenko clearly was, and it was unfortunate that he had to end his career on that note. But that doesn’t mean there may not have been a little theater involved, too. Look, I know for a fact that theater and pain can coexist because I saw “Seussical: The Musical” on Broadway in 2000. Still, beyond Hamilton’s comment, NBC’s announcers didn’t further analyze Plushenko’s decision much, aside from interviewing him and confirming that he is “not robot.”

But enough about Plushenko. Let’s focus on the heroes of Thursday’s prime-time broadcast, starting with the skater who crash landed his way straight into our hearts.

The fall and rise of Jeremy Abbott: This guy. My God, this guy. Abbott had fallen earlier this week during the team competition, so the last thing he wanted to do in the individual was fall again. But that’s exactly what he did, attempting a quad toe that resulted in his body splaying across the ice and slamming into the rink wall. For a minute, he looked severely hurt and stunned, unable to continue. But improbably, Abbott got up, started skating again and, his nerves no longer an issue, completed a beautiful program with the crowd completely in his corner. It was one of the most inspirational moments of these games so far, and Abbott knew it. “I think my personal story has been about perseverance and always getting up when you fall,” he said in a post-performance interview. “So maybe I’m not Olympic champion, but if nothing else, I can teach the world that.” He’s probably got a bruise on his hip the size of a small housing development, but I think we can all agree: that’s the black-and-blue mark of a winner.

Jason Brown: As he has before, the popular 19-year-old American skated to the Prince song “The Power of U” from "Graffiti Bridge” while displaying a glittery Prince symbol on his back. Let’s just stop right there and say: gold medal. Like, gold medal with a sound chip embedded in it that plays “Baby I’m a Star” on a constant loop and hangs from a purple ribbon, because that’s what you get when you skate to Prince. To be clear: Brown skated confidently and smoothly, and, I thought, deserved a higher place in the standings than sixth. But perhaps he can gain some ground in the free skate, or if the judges realize that anyone who skates to Prince automatically gets seven -- “Oh, 7, and we’ll watch them fall” -- points added to their score.

Yuzuru Hanyu: Dressed like a rhinestoned extra from “Dazed and Confused,” the Japanese skater turned on the heat and delivered a flawless routine that earned him a record-smashing score of 101.45 points. That score also resulted in this photo, which is worthy of at least 102 additional points. Hanyu stood in first place as of last night. However, he did not skate to Prince so let’s be real: He gets a silver at best.

The medal-sweeping American freestyle skiers, Joss Christensen, Gus Kenworthy and Nick Goepper: It’s amazing enough that these American slopestyle skiers all medaled, resulting in a U.S. sweep in that event. But consider the other things we know about these guys. Christensen: Lost his father in August, competed with a picture of him in his pocket. Kenworthy: Rescuing adorable stray Sochi puppies and posting photos of them on Twitter. Goepper: In an effort to earn money after his dad lost his job in the recession, knocked on neighborhood doors and said, “Hi, I’m Nick Goepper. I’m an aspiring skier. Are there any odd jobs I can do around the house?” These guys are the fine, young American men everyone always talks about when they talk about fine, young American men. In other words, they’re basically Matt Saracen from “Friday Night Lights” to the third degree, times 10, plus five puppies.

Henrik Harlaut: This Swedish freestyle skier wore his pants so loose that they immediately dropped to his knees the minute he hit the rails or a jump. He sported his signature dreadlocks, which suggest he has the potential to medal in hackey sack someday, should that ever become an Olympic sport. Those qualities made him an awesome character to watch. But the most important Harlaut fun fact was this: The dude was carrying an uncooked egg in his pocket while competing, an idea that, like all good ideas, he got from the movie “Cool Runnings.” When Harlaut fell during one of his qualifying runs, NBC reported that the egg had indeed broken, but still remained in his pocket for future runs. But look on that Sochi snow and what did you notice? The guy didn’t leave behind a single drop of yolk. That’s called being a professional.

Katie Uhlaender: I dig this skeleton competitor’s attitude. I dig the fact that she carries the baseball card of her late father, MLB player Ted Uhlaender, on the bottom of her sled. I dig how fast she can shoot down a sledding track. And I really, really dig her bright pink hair. But what impressed me most about her is the fact that she’s suffered so many injuries -- a broken foot, a torn ACL and MCL, a broken kneecap, a concussion -- that NBC felt compelled to turn her body into an infographic designed to summarize all of her pain: basically “All the Ways Katie Uhlaender Has Effed Up Her Body, in One Chart.”

Noelle Pikus-Pace: Another American vying for gold in the skeleton event, Pikus-Pace missed out on medaling in Vancouver, coming in fourth place. That makes her Sochi journey that much more suspenseful, as does the fact that she has three herniated discs in her back and two young kids to parent while preparing for her Olympic effort. On top of all that, NBC’s segment on Pikus-Pace revealed that she had a miscarriage not long ago; talking about it brought tears to her eyes and tears to mine as well. Dammit, Olympics, why do you insist on making us feel so many feelings?

Zhang Hong: The Chinese 1000m competitor earned China’s first-ever gold medal in speed skating, which NBC covered early in its broadcast. That’s a big deal, but with all the figure skating and freestyle skiing drama, it was easy to forget that Zhang was a hero last night, too. It seemed only right to note it here.

Captain America: Totally a hero! And, if I correctly understood the commercials for his movie that were weirdly interwoven into the Olympics coverage, he also earned a gold medal in the halfpipe while Robert Redford scored a bronze. Seriously, though, Captain America is a great guy. He may not be a guy who could take a hard hit on ice, then get up and skate a nearly flawless routine. But really: What Avenger can do that?