The Valentine's Day we got it all wrong -- and right

He showed up with a gift, and I came empty-handed. Finally, we were speaking each other's languages 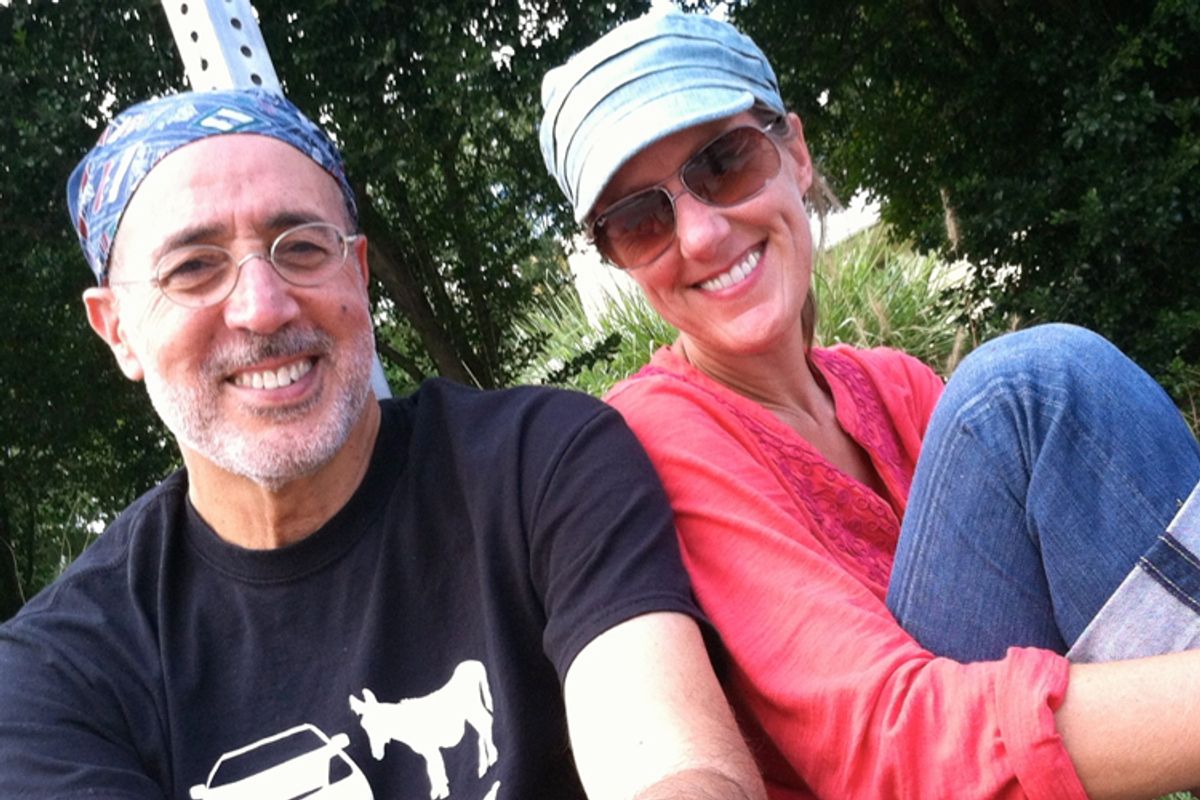 On Valentine’s Day my husband Ismail pushed the door open with his foot and walked in cradling a dozen red roses, bundled in red crepe paper and tied up with a pink satin bow. He handed me a small black box, which I opened to find ebony hearts and dense chocolate squares topped with sea salt like cut glass.

I stared at the gifts, and then at him, in amazement. I knew how much he dreaded this day when men circled grocery-store flower displays like sharks or grabbed heart-shaped chocolate samplers from the shelves without even inspecting them. So many previous Valentine’s Days had ended with my tears and anger, because he had refused to participate in rituals he was certain were cooked up by the marketing teams of chocolate and flower conglomerates. His gesture was as much an expression of surrender as putting his forehead to the ground during his daily prayers. In nearly a decade of marriage, this was the first time he’d given me gifts like these.

“I didn’t get you anything for Valentine’s Day this year,” I blurted. Even as I said it, I cringed at how thoughtless I sounded, knowing how hurt and angry I had been when the tables were turned.

Each year without fail I had presented him with a Valentine’s gift. It wasn’t that I had lost track of time this year, or that I was trying to make him pay for his previous oversights. Twice, in fact, I had gone shopping. Wandering through men’s departments, I’d run my finger along sweater collars, sprayed cologne on my wrist, loosened caps to sniff shaving cream. Argyle socks, belts, pajamas, boxers — I’d considered them all.

But then, standing before a life-size photo of a man in boxers with glistening cleavage, I’d thought of the plain white cotton briefs stacked in Ismail’s drawers. I recalled the cologne and shaving cream bottles lined up neatly below his sink — untouched presents from previous holidays — as well as the nearly identical shirts and sweaters hanging in his closet, all purchased on occasions like this one. In a burst of inspiration, I realized what would please him most: for me to leave this department store empty-handed, to defy Hallmark’s insistence on the significance of this holiday. So I decided to give him the one present I never had before: nothing.

My decision flew in the face of 30 years of conditioning. As a girl I’d stared slack-jawed at the television screen as Princess Diana waved from the palace balcony on her wedding day. A broad-shouldered prince stood by her side, his ribboned chest ornamented with gold. She swiveled her delicate wrist and turned, billowing white sleeves like dollops of buttercream frosting on each shoulder, and disappeared into her happily ever after.

I stored this image away in my mind, along with a rapidly growing collection of romantic fantasies, scraps from movies and songs and magazines that I assembled throughout adolescence into a jumbled collage of longing and expectation. There would be a handsome, successful, broad-shouldered young husband, a white wedding dress that swept the floor, a tree girded with presents on Christmas morning and packages in red bows for Valentine’s Day. There would be travel and adventure and dinner parties with smart and witty friends, and somewhere down the line, there would be two-point-three happy and obedient children. Oh – and there would also be a bright career and a big paycheck with my name on it. Fresh from college I got a job at Planned Parenthood, and I wholeheartedly believed the gospel of the organization: As long as I made responsible choices and planned carefully, I could build the life I wanted.

Then one day, on a jogging trail that snaked through the North Carolina woods, I met a grey-haired man with a thick accent whose conversation was peppered with references to Allah. His attic apartment was tiny and sparse, but his heart seemed more spacious than any man’s I had known. Like mercury to a magnet, I was drawn to him – in spite of my quicksilver doubts and toxic fear. I’d never been so moved by someone’s touch or so at home in their company. And yet he was older and darker and poorer and more foreign than the husband I had planned to have. The husband of my dreams did not put his forehead to the ground to pray in an apartment that was pungent with strange spices, or carry on passionate Arabic phone conversations with his Libyan family that sounded like heated arguments, though he insisted they were friendly chats. Nor was his idea of a holiday to fast for an entire month. Through feminism I had discovered ambition; now I began to learn about the subtle and enduring rewards of surrender.

The night Ismail asked me to marry him, he was empty-handed. His proposal was to sanctify our union by having a fellow Muslim recite the opening prayer of the Quran over us in the presence of three witnesses. Diamonds, guest lists, and honeymoons were not on his mind. As gracefully as I could, I pointed out that in addition to God’s blessing, I also needed a ring. Not long afterward, we stood  in the mall contemplating a display of diamonds – the only jewel, I explained to Ismail, that captured the brilliance of enduring love. I pointed to a ring in an antique platinum setting that evoked a certain nostalgia, a purchased connection to the past.

“It’s very beautiful,” the jeweler murmured as he gently slid the case open, as if trying not to wake me from a sleepwalking dream. He placed the ring in Ismail’s palm: our cue to act out the long-standing middle-class American courtship ritual.

“How much?” Ismail said in a voice loud enough for everyone in the store to hear. In response to the number, a small explosion of air burst from his lips. He leaned in over the counter.

“Listen: I will pay you half that, in cash, and I plan to take this ring home with me tonight,” Ismail announced, pounding the glass countertop with his index finger – as if he were bartering in Tripoli’s Old City, where vendors and customers faced off in noisy negotiations, leaning over counters and slapping tabletops and jabbing the air for emphasis.

Silence fell as the jeweler tried to figure out how to respond. Nearby shoppers glanced furtively over at us, unsure if they were witnessing a negotiation or a holdup.

I sputtered, as stone-cold awake now as if water had been thrown into my face. In my family talking about money, like talking about sex, was considered vulgar. We knew that cash, like body fluids, was exchanged behind closed doors, and that these transactions were the unspoken foundation of our lives, but we never discussed them openly or made a spectacle of ourselves in public.

To my amazement, the jeweler reduced the price by 30 percent, and I left the store wearing a diamond ring that now appeared exactly 30 percent smaller on my finger, as if it, too, had shrunk in embarrassment. Later that year, I sat cross-legged on the floor of my illiterate mother-in-law’s sparse home on the outskirts of Tripoli, studying the tattoo that ran down her chin as she welcomed me in Arabic. When she covered my manicured hands with her leathery ones, my diamond ring seemed to triple in size and poke her calloused palms with aggressive affluence.

Every relationship is bicultural. We enter into the foreign country of marriage lugging our particular baggage: assumptions and emotional hard-wiring, expectations and longing. If we are lucky, we eventually discover what weighs us down; we begin to discard what does not serve us so we can travel lighter.  When I began to release my fantasies of what love should look like, I discovered a new buoyancy in my marriage.

At the end of Valentine’s Day, after the dishes were done, Ismail and I set out for a nighttime walk. Leaving behind our warm, bright house that still smelled of the chicken we had roasted, we stepped beneath a starlit canopy into the bracing night air. We cut through our backyard and crossed into a meadow. A herd of deer lifted their heads in unison to stare at us, then froze like lawn ornaments as we passed by. We skirted the edge of the pond without speaking. On the far side of the meadow, where damp pavement shimmered in the glow of a street lamp, we stepped onto the sidewalk and our strides fell into rhythm. Our long shadows led the way before us. Ismail turned to face me.

“I’ll never forget the gift you gave me today. Thank you.”

I glanced at him, then back at our shadows bleeding together on the pavement. The Quran says that God is nearer to us than our own jugular vein, and there were moments when Ismail felt that close: nearer than my own skin, so much a part of me that I lost sight of him altogether. If I tried to describe that intimacy, each word was a wedge between us, cleaving us in two, creating concepts from a seamless whole. So I said nothing, focusing instead on the slender, faceless shadows before us. Merged together, they lumbered like one animal through the night.

Krista Bremer is an award-winning essayist and the author of the memoir "My Accidental Jihad," which will be released in April 2014. She lives in Carrboro, North Carolina, and works as associate publisher of The Sun.