What TV gets wrong about guns

When TV shows use firearms in unrealistic ways, they end up trivializing gun violence 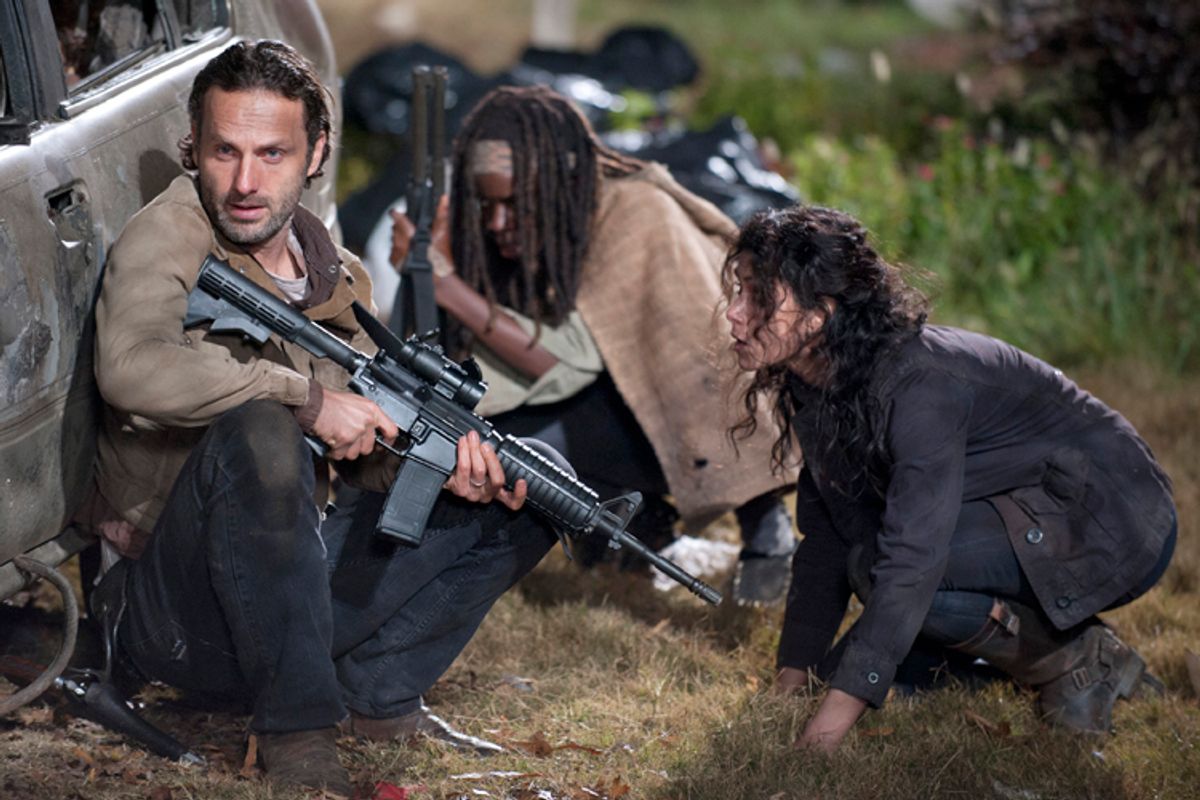 My conservative boyfriend John likes to tease me, because I yell at the television every morning while "Fox & Friends" is playing.  With a superior sniff, he points out that yelling at the television is silly because the talking heads can’t hear me -- but every evening, he yells at the television too. He just yells about the guns. Specifically, he yells when the guns are wrong. In addition to the Military Channel and the History Channel, he also watches “The Following,” one of many moody dramas starring charismatic serial killers. As the antihero cop starts stalking the killer through the inevitably dark room, letting the muzzle of his firearm lead the way, John jumps up and yells at the television. “That’s a single-action pistol, idiot! It’s got to be cocked.”

I never notice these details, but they matter to him. With great agitation, he shakes me loose from my books and explains: “It’s as if you’re at a play and Hamlet comes out to deliver his soliloquy, but his fly is open and all you can see is his thing...” -- he scowls ferociously – “… while the clueless bastard goes on about poor Yorick.” To make his point, he kindly removes his pants and reads Shakespeare to me.

In the privacy of our living room, he yells about the guns quite a lot, because they dominate the networks. Lately, guns have been popping up on BBC cop shows, which John finds strange because these sudden appearances seem forced to him -- like when Benedict Cumberbatch’s Sherlock whips out a Sig-Sauer and shoots a smiley face on his wall while complaining about being “bored, bored, bored.” Sherlock’s gun is a prop that amateurs can’t help recognizing as fake, for the same reason that fake fur and fake crab is obvious to most people who wear clothes and eat. When the real thing is part of everyday life, the props stand out like kiddie finger paintings hung in the Louvre. In the U.K., access to firearms is so restricted that even its police force isn’t armed, carrying bobby sticks instead. For Sherlock to shoot his living room wall not only breaks several U.K. laws, it’s completely out of cultural context. In short, the BBC’s "Sherlock" doesn’t treat guns like guns; it treats them like in-jokes that poke cheeky fun at the American obsession with guns.

Now that the BBC is going gun, there aren’t any other police procedurals that I can make John watch without the liberal media’s callous disregard for guns upsetting him terribly. To relax, he watches the zombie show "The Walking Dead." Southern redneck Darryl Dixon carries a crossbow, and mysterious Michonne wields a Katana blade. But apart from this ornery pair, the rest of the cast packs heat and open-carries, too. When the show started out, the guns were grab 'n’ go, but once the humans got organized, they logically armed themselves with AR-15s and stocked up on .223/.556 ammo. Odd, then, that Sheriff Rick not only used a Colt Python to blast off the head of a little girl (zombie) while looking suitably anguished, he kept it. Flagrantly retro, that classic revolver was perfected in the '50s, linking cowboy Rick to the salad days of suburbia when right was Right and left was Wrong. Prices for that coveted model have shot through the roof.

So a gun shows up on a popular show, and suddenly, its value goes up in the real world. It happened with the Smith & Wesson Model 29, otherwise known as the “Dirty Harry gun,” and the Walther PPK shall forever be known as the “James Bond gun.” Guns are part of the American cultural landscape, as Roy Lichtenstein’s pop-art print "Pistol" observed five decades ago.  In some variations of the print, the gun is smoking but it’s always pointed straight at the viewer, directly echoing the finger pointed in the recruiting poster for the war effort: Uncle Sam Wants You. A standard pistol has six shots. When a television character keeps shooting on and on (and on and on and on and on) and never has to reload, this turns the weapon into a magic wand. Which is to say, a fantasy where guns aren’t guns but plot devices racking up body counts high enough to keep viewers hooked. That saturation has costly, real-world consequences that can’t be fully controlled, foreseen or predicted.

America has a gun violence problem, even as its entertainment industry churns out pop-culture products that profit handsomely from it. If political pundits are correct and there are “two Americas,” it can be said that red and blue America have different perspectives regarding acceptable gun narratives. American Rifleman and other gun magazines regularly review mainstream and blockbuster Hollywood films, and they applaud characters who carry weapons that make sense in a moral universe filled with shades of gray, instead of confusing viewers by letting them tell themselves it’s only make-believe. In the original French version of "La Femme Nikita," for example, the female assassin carried a Desert Eagle, which arguably made sense for her (absurd) profession. The American remake armed her with a .22 caliber Hammerli model 280, a gun that is basically a target pistol. This kind of firearm isn’t an assassin’s tool. It’s a dangerous accessory precisely because it privileges fashion over function. Gun aficionados hate this, because it’s terrible for gun safety and disrespectful of the serious responsibilities that gun ownership entails.

In 1960, French theorist Guy Debord summed up the main problem facing the society of the spectacle: “When the real world changes into simple images, the simple images become real beings.” And so it is with guns. We stare at them on-screen, fake-killing dozens every night, and yet it’s always the other guy’s fault when the murder statistics come out and real humans go into the ground. It can be argued that gun enthusiasts are missing the point by obsessing about the good guy running around half-cocked, but they do so because our stories suffer from a cavalier disregard for the fact that real guns can kill, and when the horror happens and it ends up on Fox News, there’s no resurrecting spell to bring back the victims.

Every television drama currently airing features guns, guns and more guns, because otherwise it would be a comedy. That this strategy is so commonplace merely illustrates the ugly divorce between entertainment and reality, as well as the relentless numbing of our sensibilities to gun violence. In 2013, the highest-grossing film of the year was "Iron Man 3," featuring Tony Stark/Iron Man, a character who unites gun violence (Stark, the arms manufacturer) and gun entertainment (Iron Man, the superhero) into a monstrously profitable package. It should be obvious that these fantasies are being “told by an idiot, full of sound and fury, signifying nothing,” says John (… more or less. I have turned his swears into a quote from Macbeth, which conveys his sentiments in polite English). But the people who see this most clearly aren’t laughing. These gun fantasies exist because We the People demand them, so if fingers are to be pointed, it’s at ourselves.