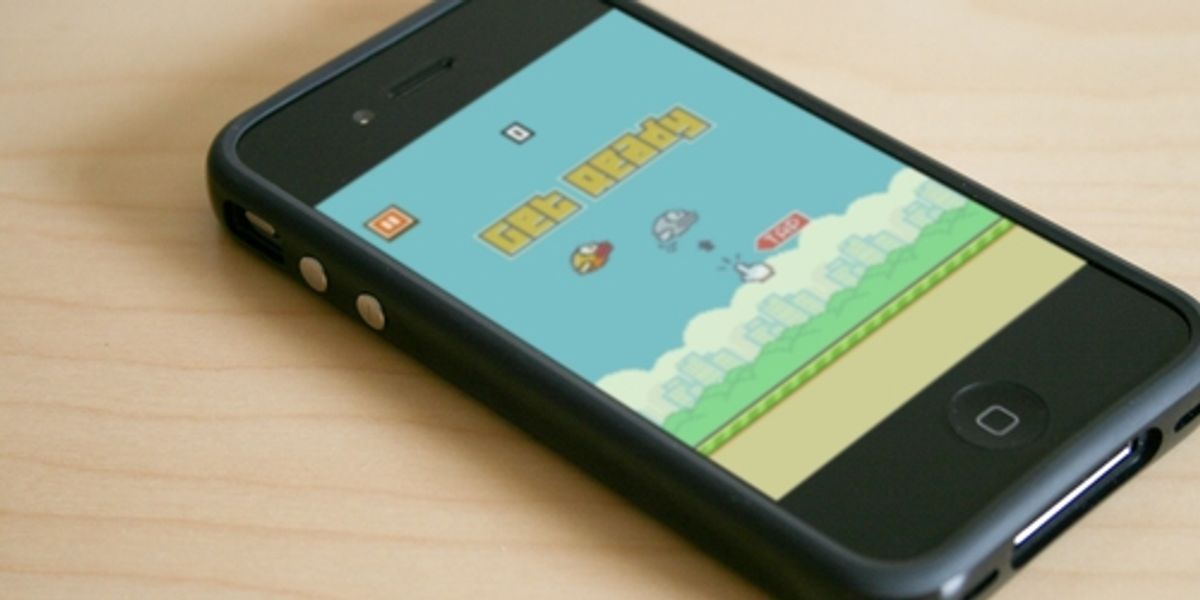 There’s a feeling that you get when your skills are perfectly matched against a difficult challenge. You become engrossed, even obsessed. Your entire world is focused on the task at hand. Your body responds to the perfect combination of frustration from the difficulty of the challenge and the sense of accomplishment from overcoming it. All great creative minds throughout history—artists, musicians, dancers, and inventors—have experienced this feeling while deep in the midst of their creative process.

It is also a feeling that some people get when they play Flappy Bird, the deceptively complex and addictive smartphone game by Vietnamese developer Dong Nguyen that’s raking in an astounding $50,000 in daily revenue.

Psychologist Mihaly Csikszentmihalyi calls this feeling “flow.” It arises when there is a perfect balance between stress and reward. If the task that you’re engaged in is too hard and you don’t succeed, then your emotions swing in one direction: anxiety, anger, and frustration. If the task is too easy, you swing in the other: boredom and disinterest. When challenge and success are balanced, the result can be emotionally intoxicating.

Csikszentmihalyi developed his theory of “flow” by studying artists, inventors, and creative geniuses. After conducting hundreds of interviews, he found that creative people experience very similar feelings when they are deeply engaged in their craft. Different people describe the feeling in different ways, ranging from euphoria to a sense of oneness with the universe. The feeling’s often accompanied by a loss of a sense of time, or even of self.

He also found that the quest for this feeling is frequently part of the motivation that drives inventors and artists to create. The stereotype of the “tortured artist” is a popular one, and although there may not be any scientific evidence that artists are more maudlin than the rest of us, there is evidence that imaginative people use the act of creating as a way to regulate their emotions.

Whether it’s writing, composing music, creating a painting or a sculpture, or performing a dance, successful artists commonly use their own creative process as a way of managing their feelings. The rush that they get, the feeling of flow, becomes a driving force that can lead them to push themselves to greater performances, greater discoveries, or greater achievements in art.

Playing Flappy Bird, on the other hand, does not produce great art. It produces nothing at all. But, by providing an ongoing mixture of adrenaline from frustration and euphoria from periodic achievement, Flappy Bird and other games like it stimulate a physical and emotional reaction similar to the one that artists experience when creating.

Flappy Bird is addictive. Of course it is. To point it out is almost cliché. It has become downright trendy to apply the “addictive” label to anything technological and fun: texting, Facebook, smartphones, etc.

Studies have shown that texting produces dopaminergic and noradrenergic responses in the brain, triggering many of the same systems that are involved in chemical addictions. There is no doubt that, given time, studies will show that playing Flappy Bird does the same thing.

But this shouldn’t be a surprise. Many behaviors affect our brain and body chemistry. Exhibitionism stimulates noradrenaline and cortisol production. Whispering sweet nothings in the ear of your lover stimulates opioid production in both of you. Watching your favorite football team score a touchdown on the big flat screen television in a sports bar causes the testosterone levels in your blood to increase.

It may seem weird that different behaviors or situations are able to push around our body’s chemistry in this way, but behind every example is an intricate story. In some cases, science is just beginning to unwind the purposes of our complex and interconnected systems of emotional and biochemical regulation.

The opioid system in the brain, for example, is absolutely fundamental to caregiving and social attachment. Although neurotransmitters that we call “opioids,” in the same chemical family as opium and heroin, originally evolved primarily as painkillers, at some point evolution found a way to co-opt the good feelings and comfort produced by opioids as a way to stimulate the formation of social bonds. As a result, when a crying baby sees its mother, it triggers the brain to produce a flood of opioids that naturally calm it down. The same thing happens later in life, when you are calmed by the sight of people you love.

Of course, the opioid system is what chemicals like heroin interact with to produce highs, addiction, and often deadly results. But understanding the role of the opioid system in the body puts heroin addiction in a new kind of context. A heroin addict, like a crying baby, suffers from chronic anxiety and is looking for soothing and comfort. The heroin manipulates the same part of the brain that has evolved specifically to give us feelings of comfort and calm when we’re around other people who can sooth and protect us.

So back to Flappy Bird. What natural and evolved system is Flappy Bird tapping into? What chemical process is Flappy Bird simulating, like a hit of heroin, to replace a process that evolved for a purpose?

One possible explanation comes from considering Csikszentmihalyi’s ideas about flow. The complementary neurochemical systems of stress—driven by the noradrenergic system—and reward—driven by dopamine—are powerful drivers of emotion and behavior. Get the right balance between adrenaline and dopamine, and the result is euphoria.

It’s easy to imagine why our bodies might have evolved to reward us for these behaviors. When you are attempting something that is difficult but also within your grasp to succeed, that’s when you are most likely to accomplish something great.

Your body and emotions should steer you clear of tasks where you are likely to fail, and they do so by responding to situations that are too difficult with anxiety. They should also prevent you from falling into inaction and stasis, and they do, by responding to situations that are too easy with boredom. Our moods are like a thermostat, set to drive us to seek out challenges and accomplishment.

The problem, of course, is that biochemical systems can be fooled. You need comfort, you need soothing, and you need protection. Internally, you are going through opioid withdrawal. Evolution is trying to pressure you to be social, to find people who can care for you and work with you and make a connection with you. But you always have the option of doing a hit of heroin instead.

By the same token, people have a natural and intrinsic, even biochemical, drive to achieve things. At a basic physiological level, our chemical systems try to point us in a particular direction: Try new things that are not too hard but that challenge you. Be creative! Discover something new! Find that state of intellectual and creative growth that leads to the feeling of flow!

But you always have the option of stimulating that feeling in other ways, instead. If you can get your dopamine and adrenaline hit from Flappy Bird, then you never have the motivation to pick up a paint brush or take those dance lessons you’ve been thinking about. One wonders if Michelangelo would have accomplished as much in his lifetime if he had had the option of losing himself in Flappy Bird instead.

Of course, not everyone who tries Flappy Bird will get the same feeling from it. Many people play it for five minutes, decide that it is aggravating and pointless, and put it away forever.

If you are one of those people who is returning to Flappy Bird over and over again though, the reason is probably the same. You are getting that beautiful spike in adrenaline, the frustration and tension and beating heart, followed by the reward and satisfaction, served to you by a flood of dopamine, every time you succeed.

It’s a great feeling, to be sure. But it’s also worth keeping this in the back of your mind: What you are doing is fooling your brain chemistry into thinking that you are accomplishing something. At a very raw biological level, that is what you are doing: stimulating those same chemical pathways that normally would be activated because you are doing something creative, challenging, and worthwhile.

Think of how much of a success you would be, then, if that was actually what you were doing, instead of playing Flappy Bird.