The battle for mass transit's soul: How will tomorrow's greatest cities travel? 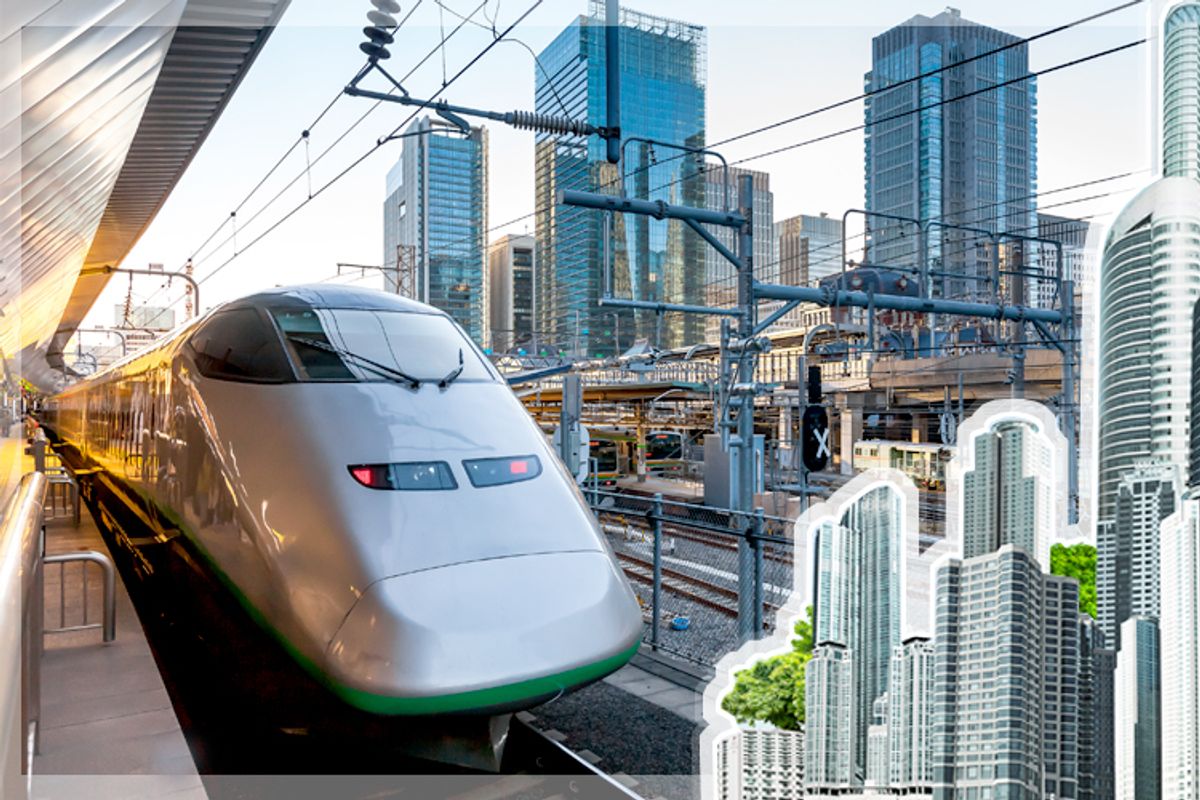 Just after noon on Thursday, Feb. 6, at New York City's Centre for Social Innovation, Jarrett Walker was three hours into his course on transit design and presiding over a scene redolent of a high school classroom. In a typically modest gesture, he held up his hand for attention, but the students chattered on. Only the hushes of their more alert peers brought the room to attention.

On the minds of these 30 urban affairs professionals was Newport, a U-shaped, peninsular city of Walker’s creation that looks something like an upside-down San Francisco. Their task that morning had been to design Newport a rudimentary bus system. Split into six groups, they hunched over poster-sized maps, plotting and rubbing out bus routes in colored sharpies on plastic tracing sheets. When the exercise concluded, the maps — laced with red, blue and green (bus frequencies of 15, 30 and 60 minutes, respectively) — were hung side by side on the wall. As Walker perused the six networks, the atmosphere grew tense, each group poised to defend the quirks of its design: an entire section of the city left out on one map, a lack of high-frequency lines on another, no downtown-airport connection on a third.

Over the past three years, Walker has taught his Interactive Course in Transit Network Design more than a dozen times, in four countries, and its hundreds of graduates are sprinkled across city governments, transit agencies and nonprofits in the U.S. and beyond. (The New York course, hosted by the Transit Center, gathered students from as far away as Barcelona and Prague; two more courses are scheduled for March, in Australia.) The material is linked to the contents of his 2011 book, “Human Transit,” and both are based on his experience as a consultant, helping cities from Sydney to Seattle get people from place to place. Last year, Walker spent one in three nights on the road, teaching, advising, speaking and so forth – the itinerant preacher of transit know-how.

Spurred by the book and his prolific blog of the same name, Walker has quickly become a reliable voice in transit debates. He is quoted in two of Next City’s last five cover stories; a search for his name on The Atlantic Cities returns some 430 hits, though he has written only three pieces for the site. His acolytes are numerous. When I asked one enrollee, an MTA planner, what he thought of the course, he confessed a bias: Two years ago he had spent the week before his MTA interview plowing through Walker’s book. He got the gig.

Unlike other courses in transit planning, Walker’s attracts many from outside the field. “It’s a more inclusive crowd,” notes David Bragdon, the head of the Transit Center, who recruited Walker to New York. But then transit design has never been a closed profession. There is no exam new planners must pass. For Walker, who has a PhD from Stanford in literature, the openness of the field is a tremendous asset. This attitude is apparent in “Human Transit” as well, which Eric Jaffe compared to “a good language book, for it feels capable of teaching anyone, beginner or beyond, to speak 'Transit' more fluently.” The sundry priorities of participants – economists want to balance the books, politicians want to serve constituents, urban designers want to create good public spaces, real estate developers want to boost land values – can enrich transit planning.

But the chorus of expertise can also distort. Newport, then, is a skeletal representation of a city. There is parkland, water and a few landmarks, but the primary data comes from gridded squares shaded to represent job and population density. “That’s all you need,” said Walker. He likes to tell a story from his first planning job, as an intern at Portland's transit agency in the early 1980s. One day, while the planners were discussing the new network, word spread that the general manager wanted all senior staff in his office in five minutes. The crisis in question? A scourge of possums at a bus stop on Broadway. “The entire brain of the agency shut down,” Walker recalled. “That’s the daily life of a transit agency: constant, catastrophic loss of altitude; constant interruption of the kind of spacious thought processes you need to visualize a city.”

Walker, dressed all in black, cuts an imposing figure at the head of the room. He is very tall, with a shaved head, and peers through frameless round glasses. He speaks softly and firmly. But he relies on participants (armed with remote clickers) to answer most of his questions: What advantages does a gridded transit network offer over a radial system? Is a short walk to a slow bus better than a long walk to a fast bus? What part of a system – branching geographic coverage (equity) or busy trunk lines (efficiency) – should be built first?

“I don’t like to talk about right answers,” Walker told me. "There are optimal answers for different sets of values.”

Walker is a transit purist. His mantra, “frequency is freedom,” sums up a philosophy that prizes efficiency and utility as a system’s best qualities. “Much of the public discussion of transit is about externalities (emissions, economic outcomes, fun, ‘look and feel,’ and so on) while strikingly little is about helping people to get where they’re going, or to access more of the city easily,” he said in a 2012 interview. To Walker, the level of uncertainty that pervades transit use — the surrender of control, the feeling of helplessness — is a debilitating hindrance. “A transit map that makes all the lines look equal,” he writes in "Human Transit," “is like a road map that doesn’t show the difference between a freeway and a gravel road.”

Not everyone agrees that usefulness is the most pressing barrier to American transit ridership. Walker’s usual foe in this debate is urban designer Darrin Nordahl, author of "My Kind of Transit" and prominent defender of the “experience” of public transit. (His latest book is called "Making Transit Fun.")

Treehugger’s Lloyd Alter frames their opposing priorities in the 2,000-year-old terms of the Roman architect Vitruvius: Walker argues for commodity; Nordahl for delight. Tom Vanderbilt, the author of "Traffic," borrowing from psychology research, pegs their disagreement to the difference between “system” (Walker) and “empathy” (Nordahl). “The transit world,” another blogger writes, “has been divided between the pragmatic Walkerists and the hedonistic Nordahlists.”

“If we really want to attract a diverse demographic to transit it has to be compelling,” Nordahl told me over the phone. “There are a couple generations of people who have never ridden public transit! It has to move you emotionally as well as physically.” He spoke fondly of the brightly painted municipal buses he had brought to Davenport, Iowa – each manned by a “greeter” in addition to the driver, and with transparent ceilings à la Amtrak so that riders could gaze at the skyline and the stars.

“The real problem is that transit is not very useful,” Walker counters. “Delight without usefulness does not have much point, except possibly to sell real estate.” The more greeters, the fewer buses. As any transit rider knows, efficiency is its own delight.

Walker’s philosophy, as Vanderbilt notes, has an inherent messaging problem: “It’s no doubt easier to enchant the collective imagination with a gaily painted trolley jauntily jangling down the street than to crunch the numbers on the weekday boardings per hour of an authentic Los Angeles transit success story, the Wilshire Rapid bus line.” Witness the recent, tremendous growth of American streetcar systems, rolling with empathy, whose transit benefits Walker carefully debunked in a famous blog post several years ago.

There are no streetcars in Newport. There might have been light rail, but all six groups (the Force was strong with them) opted for bus rapid transit instead. “I didn’t rig this to make you build busways!” Walker said, with mock defensiveness. “But I did want you to have a chance to evaluate the tradeoffs.” By Friday afternoon, the six maps were approaching a kind of synchronicity… a mobility paradise of quick headways and rights-of-way.

Then again, Newport itself, free from squeaky-wheel citizens, pandering politicians, greedy real estate developers, influential engineering firms and smooth-talking lobbyists, was a transit utopia to begin with. Real-life planners should be so lucky.