The real Maleficent: The surprising human face behind the "Sleeping Beauty" villain 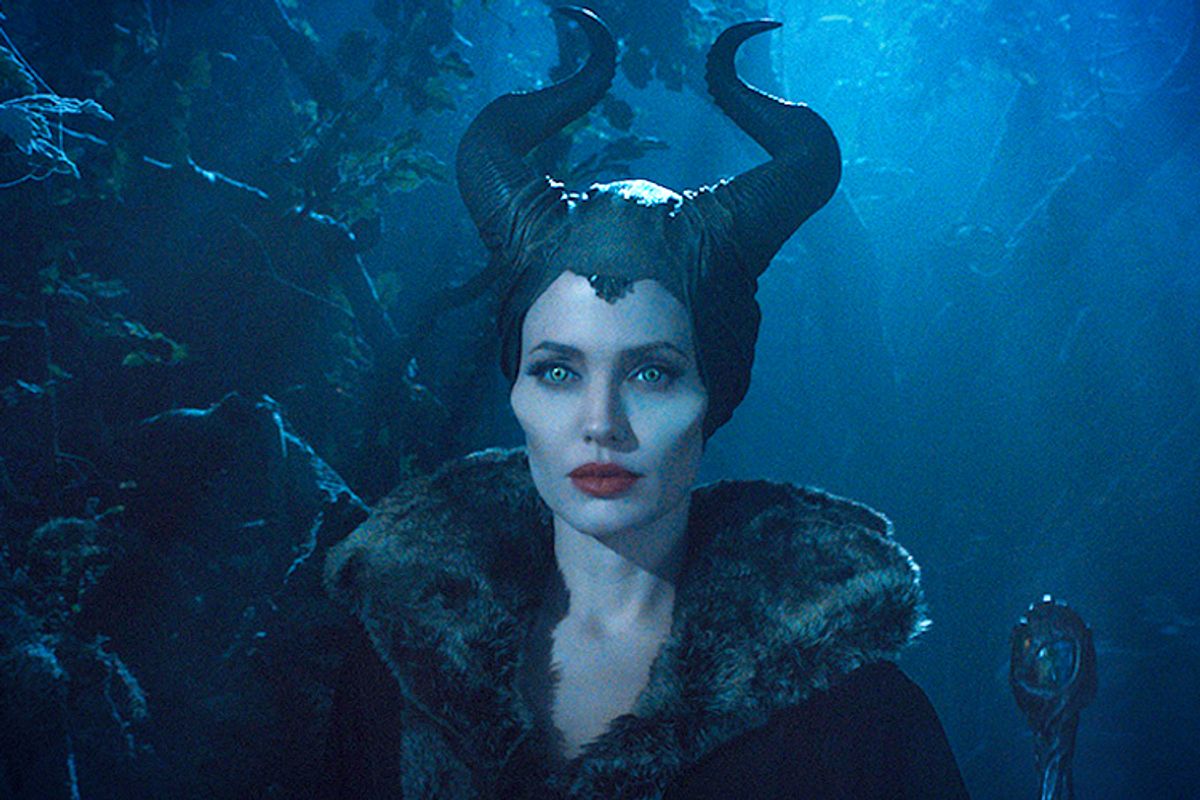 On Nov. 28, 1956, a down-at-the-heels actress dressed in a revealing homemade vampire costume walked out of her tiny apartment at 5906 Carlton Way in Hollywood, California. Unable to spring for cab fare, and working for a producer/director as cash-strapped as she was, she climbed aboard a Los Angeles city bus and rode just over a mile to the ironically-named Quality Studios, a postage-stamp-sized Hollywood soundstage, where she was about to put in the second of two days' work on what would come to be seen as the worst movie ever made, director Edward D. Wood Jr.'s "Plan 9 From Outer Space."

It was a sad ending to an amazing ride. Two and a half years earlier, Maila Nurmi had set Hollywood on its ear when she took to the L.A. airwaves as Vampira, the impossibly sexy KABC-TV horror hostess who ignited a local and then a national pop culture explosion. An instinctive rebel who hobnobbed with James Dean, Marlon Brando and Elvis Presley at various points in her improbable rise and fall, Nurmi had used the Vampira character -- which she designed herself, and which her former common-law husband named -- to both titillate the masses and to parody the cult of female passivity that prevailed in the America of 1954.

Vampira was the ideal suburban hostess, welcoming viewers into her dank, cobwebbed attic/living room, where the house pet was a tarantula named Rollo and the martinis were "vampire cocktails" garnished not with an olive but an eyeball. In the time of Marilyn Monroe and the absolute supremacy of the hourglass physique, Nurmi starved, steamed and self-mutilated her way to a 17-inch waist, then built up her bustline with handmade enhancements designed to mimic the look and feel of real breasts.

Nurmi's TV career was over by 1956, but she is well remembered for the eerie sensuality of her entranced "Plan 9" performance. In just two days of filming, on a movie she never took seriously, Nurmi secured her place in pop culture history, and created several of the most iconic American screen images of the 1950s.

It was the second time she did so in less than a week.

Nurmi's involvement with "Plan 9" has been dramatized by director Tim Burton in the comedy "Ed Wood," and was recounted by Nurmi herself for various documentaries including my own 2012 film "Vampira and Me." But virtually unknown is the private performance Nurmi gave on the Disney back lot just five days before shooting her "Plan 9" scenes, wearing the horned headdress and flowing robes of Maleficent, the evil witch in the Disney conception of the classic fairy tale "Sleeping Beauty."

Vampira fans have long noted the unmistakable similarities between Nurmi's bone structure and character make-up and Disney's most popular villainess. The Disney animators would have been quite familiar with the imperious and sexual Vampira character, which became a local smash in Greater Los Angeles from the moment it took to the air. The Disney organization is also known to have redesigned Maleficent several times; initial versions of the character were round-faced and featured a pair of antennae and green skin worthy of a '50s cartoon Martian.

Unconfirmed rumors of Nurmi's involvement have circulated for many years, but scant evidence of a Vampira/Maleficent connection emerged during Maila Nurmi's lifetime. The issue was further confused by "Sleeping Beauty's" eight-year production cycle (though begun in 1951, three years before Vampira first appeared on television, the film was not released until 1959). And the Disney organization's corporate euphemisms about the fact that major elements of their "golden era" animated output were rotoscoped (i.e., painted over live-action footage to insure realistic motion) made Maila Nurmi's participation as Maleficent's character model part of a process that was secretive by design.

The handful of stills that have trickled out over the years depicting what Disney calls a "live action modelling" shoot for "Sleeping Beauty" show round-faced voice actress Eleanor Audley wearing Maleficent's horned crown.

But after Maila Nurmi's death, her extensive datebooks and personal diaries (initially written at the behest of close friend and therapy addict Marlon Brando, who felt diary writing would keep Nurmi grounded) became the property of her niece Sandra Niemi. The year 1956 was especially well-documented by Nurmi. Here are some of her datebook entries for the last three weeks of November:

The entries specifically namecheck the Maleficent character, and indicate that Nurmi went to the studio for a Maleficent wardrobe fitting and then posed for Disney's animators on two consecutive Fridays, dressed for the part.

It's important to note that these are private jottings, never intended for publication. Their informational authenticity is corroborated not only by what we know of the timing of Ed Wood's "Plan 9" shoot but also by a contemporary photo of the Vampira/Droopert safety campaign, taken for the Los Angeles Examiner by photographer Bill Brunk and residing in the USC Digital Archive. Nurmi's datebook recounts a Droopert rehearsal on Nov. 8, then she "gets into costume" on Nov. 9, the date Brunk's photo was taken.

So secretive were Nurmi/Vampira's "live action reference" modeling sessions for Maleficent that the Disney organization lost all institutional memory of them. Contacted for this article and provided with Nurmi's datebook entry for her first meeting at Disney, Rebecca Cline, the current and very enthusiastic director of the Walt Disney Archives, grew palpably excited by the mention of "Jack Lavin" in Nurmi's datebook. Lavin, as it turns out, was "Sleeping Beauty's" casting director.

A thorough search of Lavin's records turned up no mention of Maila Nurmi or Vampira. But fortunately for animation and pop culture history, Maleficent is a hot topic at Disney just now, and many old documents have been pulled. A wider exploration of Disney's "Sleeping Beauty" production files discovered paperwork confirming Maila Nurmi's participation as a "live action reference" model for Maleficent, definitively establishing Nurmi's pivotal contribution to the character.

A wealth of Maleficent-related material is currently being exhumed and examined by Disney's in-house historians, so hopefully additional discoveries and revelations are on the way.

According to Nurmi's niece Sandra Niemi, who is currently at work on "Glamour Ghoul," a book about Maila Nurmi's life, it was common knowledge in the Niemi household that Maila Nurmi was being used as a "live reference" for the "Sleeping Beauty" villainess. In an email interview, Niemi remembered how "Aunt Maila," ever the iconoclast, "didn't like the head piece the animator designed. She didn't like the horn thing, she wanted it to be more like bigger-than-life cat ears."

"I was told Maila found work on a movie for Walt Disney," Niemi explained. "Then a letter came with a full sized sheet of drawings in pencil that Maila had made with what I know now to be Maleficent's head, only Maila drew huge cat ears."

"There were probably eight different versions of [Maleficent's] head, which looked like Vampira but with big horns, small horns, cat ears, big cat ears. I had that artwork until 1965, the year I graduated high school... damn, I wish I still had it now!  I remember when 'Sleeping Beauty' came out that I was excited because I was going to get to see an Aunt Maila cartoon.  I must have been 12 or 13 by then."

It's characteristic of the weird tapestry of Nurmi's career that she could contribute to two iconic screen images in the same week for minimal compensation and absolutely no glory. Her "lost period," during which she would become a reclusive and forgotten figure, commenced virtually simultaneously with her Disney employment and Wood's film shoot. She would linger on in obscurity until the Ed Wood revival of the late 1970s and early '80s made Vampira into a pivotal cult icon of feminine strength, which she remains to this day.

Exactly one month after Nurmi's second Disney session and just two days before Christmas 1956, Nurmi was nearly burned to death in an apartment fire, caused by her desire to brighten an impoverished Christmas by frying up some doughnuts for her boyfriend. Nurmi made local headlines for this misfortune, and a humiliating photo of a manic and bandaged Nurmi cradling a cat after her narrow escape survives.

But Nurmi's virtually simultaneous and quite significant contribution to animation history went unremarked upon, and has been just an unproven rumor -- until now.

The primal force of the Vampira character was something Nurmi well understood; it brought her both the greatest joy she was to know and also some of the most intense suffering. Even uncredited, unacknowledged and buried under an avalanche of animator's ink, the pop icon Nurmi made of herself has still had the power to endure for more than half a century, and to draw the most popular actress in the world, a recovered goth named Angelina Jolie, to Vampira's bosom, in a dark and sisterly embrace as old as Homer's Circe, and destined to outlast us all.

R. H. Greene is an L.A.-based documentarian. His latest film is the biographical documentary "Vampira and Me."