Ellen Page's coming out speech reminds us why movements matter

Page's speech was personal, but she situated her experience in the context of the work of others. That's powerful 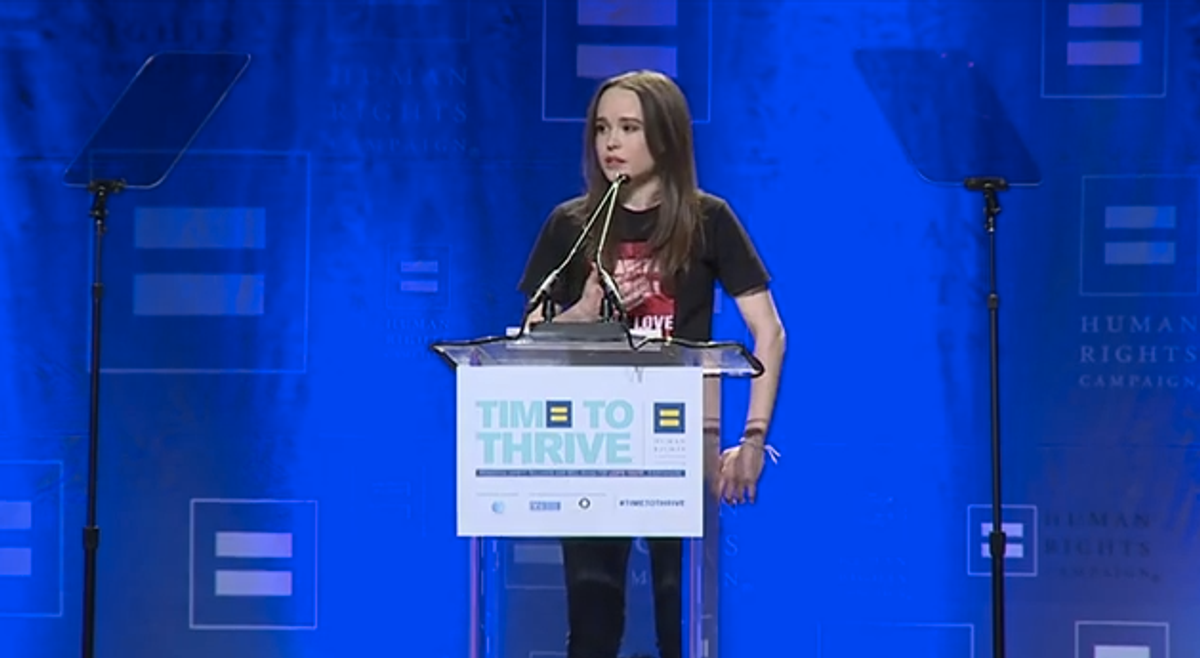 Actress Ellen Page came out as gay this weekend in an incredibly personal and moving speech about the devastating toll of the closet.

"I am here today because I am gay," Page said on Friday at the Human Rights Campaign's THRIVE conference. "And because maybe I can make a difference to help others have an easier and more hopeful time. Regardless for me I feel a personal obligation and a personal responsibility. I also do it selfishly because I’m tired of hiding and I’m tired of lying by omission. I suffered for years because I was scared to be out. My spirit suffered, my mental health suffered, and my relationship suffered. And I’m standing here today with all of you on the other side of that pain."

Page's announcement would have been an act of courage had it been delivered as a one-line statement through a publicist; it's a powerful thing to come out in a culture that systematically degrades the lives and experiences of LGBTQ people. But the power of her coming out also rests in the expansive frame she built her remarks around. Page spoke directly to her experience as a young gay actress who felt compelled for years to hide her sexuality, but also named the cultural and institutional forces that kept her -- and so many other LGBTQ youth -- silent for so long:

And I know there are people in this room who go to school every day and get treated like shit for no reason. Or you go home and you feel like you can’t tell your parents the whole truth about yourself. And beyond putting yourself in one box or another you worry about the future; about college or work or even your physical safety. And trying to create that mental picture of your life, of what on earth is going to happen to you can crush you a little bit every day. And it is toxic and painful and deeply unfair.

And sometimes it’s the little insignificant stuff that can tear you down. Now I try not to read gossip as a rule, but the other day a website ran an article with a picture of me wearing sweatpants on the way to the gym. And the writer asked, “Why does this petite beauty insist upon dressing as a massive man?” Because I like to be comfortable. There are pervasive stereotypes about masculinity and femininity that define how we’re all supposed to act, dress and speak and they serve no one. Anyone who defies these so-called norms becomes worthy of comment and scrutiny. And the LGBT community knows this all to well.

Yet there is courage all around us. The football hero Michael Sam, the actress Laverne Cox, the musicians Tegan and Sara Quinn, the family who supports their daughter or son who has come out. And there is courage in this room. All of you. And I’m inspired to be in this room because every single one of you is here for the same reason. You’re here because you’ve adopted as a core motivation the simple fact that this world would be a whole lot better if we just made an effort to be less horrible to one another.

That Page thanked Cox in her speech is fitting. Cox is another advocate who, in addition to doing the powerful work of sharing her own experience as a trans woman of color in this country, has consistently used her platform to expose the disproportionate rates of poverty and violence experienced by members of the trans community and the cultural and institutional forces that drive this violence. In addition to the work Cox does as an advocate and an educator, she is equally focused on uplifting the work other trans activists and allies are doing to secure justice for themselves and others.

Page's coming out speech is yet another reminder of that power.