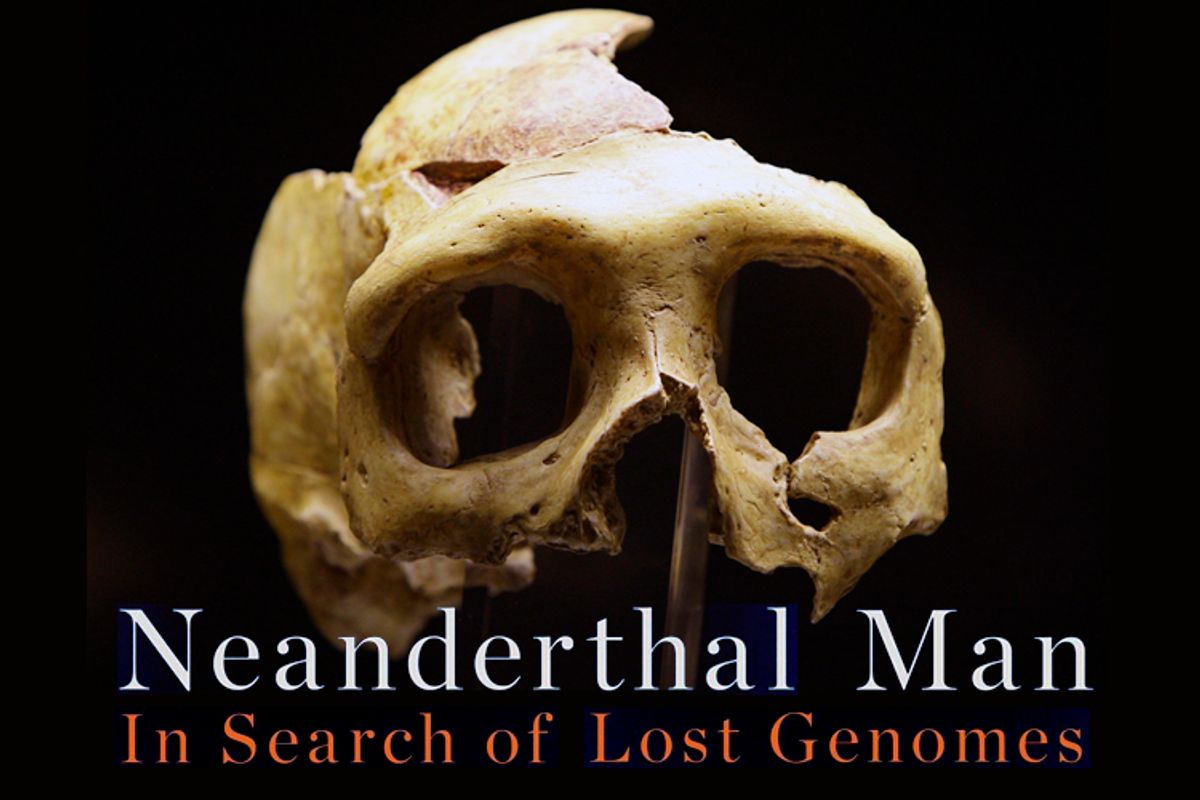 I came for the cavemen, but I stayed for the geeky nail-biter of a story about doing historic science in a climate of fierce international competition and rapid technological innovation. Svante Pääbo's "Neanderthal Man: In Search of Lost Genomes" is an account of the first sequencing of Neanderthal DNA by the molecular biologist who led the project and assembled the team who pulled it off. The book shuttles back and forth between Pääbo's own story -- his personal life has been as eventful as a soap opera, although he recounts it with a minimum of drama -- and, if not the full nitty-gritty of genetics research, then at least a goodly chunk of the nitty. It's a job characterized by grinding repetition, disappointment, bickering, frustration, anxiety and then, when you least expect it, a precious and revelatory insight into the workings of nature and the long-lost world of human prehistory.

Truth be told, DNA sequencing is pretty wonky stuff, but perhaps it's Pääbo's own passionate investment in the undertaking that makes his story so exciting to read about; "Neanderthal Man" does for paleogenetics something like what Steven Spielberg did for the legislative process in "Lincoln." Pääbo began his career as a Swedish medical student with a keen amateur interest in Egyptology. He went to work as a junior researcher at an Uppsala lab that had "mastered the then-novel methods of cloning and manipulating DNA by introducing it into bacteria." His friendship with a Finnish Egyptologist inspired him to try something new: isolating the DNA in very old tissue -- namely, mummies. To test if this could be done, Pääbo bought some calf liver from a supermarket and "mummified" it in a low-temperature lab oven. The stench soon tipped his colleagues off to his secret side project, but fortunately no one told his professor about it until he'd moved on to actual mummy tissue, supplied by his Egyptologist friend.

This project helped get Pääbo a gig as a postdoctoral fellow with the biochemist Allan Wilson at the University of California at Berkeley ("a demi-god, in my view"). It also gave him inklings of the two greatest challenges he'd face in the future: the degradation of DNA molecules after an organism's death and what Pääbo refers to as "the plague of contamination." Water and oxygen are the primary threats to the long double helix of DNA, and as tissue decays, the strands break apart into smaller pieces. Sequencing -- that is, reconstructing -- a genome from such material is "a monumental task, much like doing a giant jigsaw puzzle with many missing pieces, many damaged pieces and lots and lots of extra pieces that would fit nowhere in the puzzle." When Pääbo finally obtained enough Neanderthal DNA to attempt this feat in the late 2000s, it required "a cluster of 256 powerful computers" working for days at a time to map a single run.

But even before they could do that, Pääbo and his team at the Max Planck Institute for Evolutionary Anthropology in Leipzig, Germany, had to rustle up enough of those broken bits of Neanderthal DNA. This required extracting the fragments from old bones and creating copies of the DNA using a process called polymerase chain reaction, or PCR. The unfortunate thing about PCR is that it's so good at amplifying DNA that it also multiplies whatever other random genetic material happens to have settled on your specimen. Some of this might come from the bacteria that decompose flesh, but a lot of it is human: hair, skin, saliva and other microscopic particles of contemporary human DNA from the people who touch the specimen or simply move through the room where it's kept. This fresh DNA is so robust it can proliferate like crazy during PCR and overwhelm the fragile old DNA you want to study.

Preventing contamination is the backbeat of "Neanderthal Man," a major obsession of Pääbo's. He writes frankly of his contempt for "flashy ancient DNA results that did not meet the scientific criteria our group considered necessary," and the willingness of two high-profile journals -- Nature and Science -- to publish papers about these results without exercising due diligence. He dismisses reports of DNA retrieved from 17-million-year-old leaves or purported dinosaur bones as "ludicrous" and "outlandish" claims that grab headlines and mislead the public. Any report claiming to have retrieved DNA older than tens of thousands of years, he insists, must come from samples contaminated by contemporary DNA.

Another challenge was getting enough Neanderthal bones to analyze. In the first place, there aren't a lot of these bones, and in the second, the people in charge of them are understandably hesitant to hand them over for studies that are by necessity at least partly destructive. Pääbo, who directs the Max Planck Institute for Evolutionary Anthropology, worked for a while with researchers at Lawrence Berkeley National Lab in California, but the two institutions reached a fundamental disagreement about which method to use in extracting, amplifying and sequencing the DNA. Pääbo wanted to try newly designed machines that required grinding up much less bone than the cloning-in-bacteria process favored by his colleague. The two labs parted ways, and then for much of the rest of "Neanderthal Man," Pääbo describes his persistent fears that the other lab has nabbed the bones he wants or is just about to publish findings that, while less thorough, will steal the thunder from his own institute's discoveries.

A good portion of "Neanderthal Man" involves such intrigues: sweet-talking private industry into letting Pääbo's institute hire their machines at a discount, wrangling talented but temperamental scientists and fending off the criticism of rival scientists or those whose own pet theories might be undermined by the institute's findings. In one especially Kafkaesque incident, Pääbo discovered a cache of alluring Neanderthal bones in a neglected museum in Zagreb, Croatia. The bones had been stripped of flesh, quite possibly in an act of cannibalism, before they were deposited or left in a cave. Because the flesh had been removed shortly after death, these bones were much less exposed to the bacteria that consume soft tissues during decomposition. Even though the shards seemed to be of little interest to traditional paleontologists, it soon became clear that "some unknown person with influence ... was apparently determined to make it impossible for us to work on them." It took months of occult diplomacy to appease this (still-unknown) opponent, but fortunately Pääbo did: One of those bones became the key source for sequencing the Neanderthal genome.

At the heart of it all is a team of scientists gathering in a room to devise new ways to solve the mystery of Neanderthal DNA, which is also the mystery of what makes us human -- or, rather, "modern" humans, since Neanderthals were human, too. Why was their culture relatively unchanged for hundreds of thousands of years while ours rapidly evolved to enable us to take over the planet, driving them into extinction? The genetic roots of that difference are what most interest Pääbo, but along the way, he has uncovered a few jaw-droppers, such as the fact that some modern humans have remnants of Neanderthal genes in our genomes and the identification of a previously unknown type of ancient human (not quite a new species), called the Denisovans. (Both of those revelations came as complete surprises to Pääbo.)

Analysis of the discrepancies between Neanderthal, modern human and ape genomes have -- despite our "woefully inadequate knowledge of what genes do" -- shed a little light on such issues as how Neanderthal penises worked and (indirectly) the size of their testicles. (If you want to know more about that, well, sorry: No spoilers.) Perhaps more significantly, Neanderthals may have contributed resistance to certain diseases, resistance we needed as we proceeded to take Europe away from them. The genetic comparisons Pääbo's team performed also showed that modern Asians have more Neanderthal genes than anyone anticipated, suggesting that early modern humans mingled with them when they moved out of Africa and into the Mideast, before finally heading further east.

Still, if you're mainly looking for dish on the Neanderthals, "Neanderthal Man" is a bit parsimonious. Rather, this book is a vibrant testimonial to what might be the greatest creation of modern humans: the scientific method. "Progress in science," Pääbo writes, "often entails a painful process of realizing that your ideas and those of your peers are wrong, and an even longer struggle to persuade your closest associates and then the world at large to consider a new idea." Painful, no doubt, but what a thrilling and beautiful thing it is.