4 of the best movies about America's ludicrous war on drugs 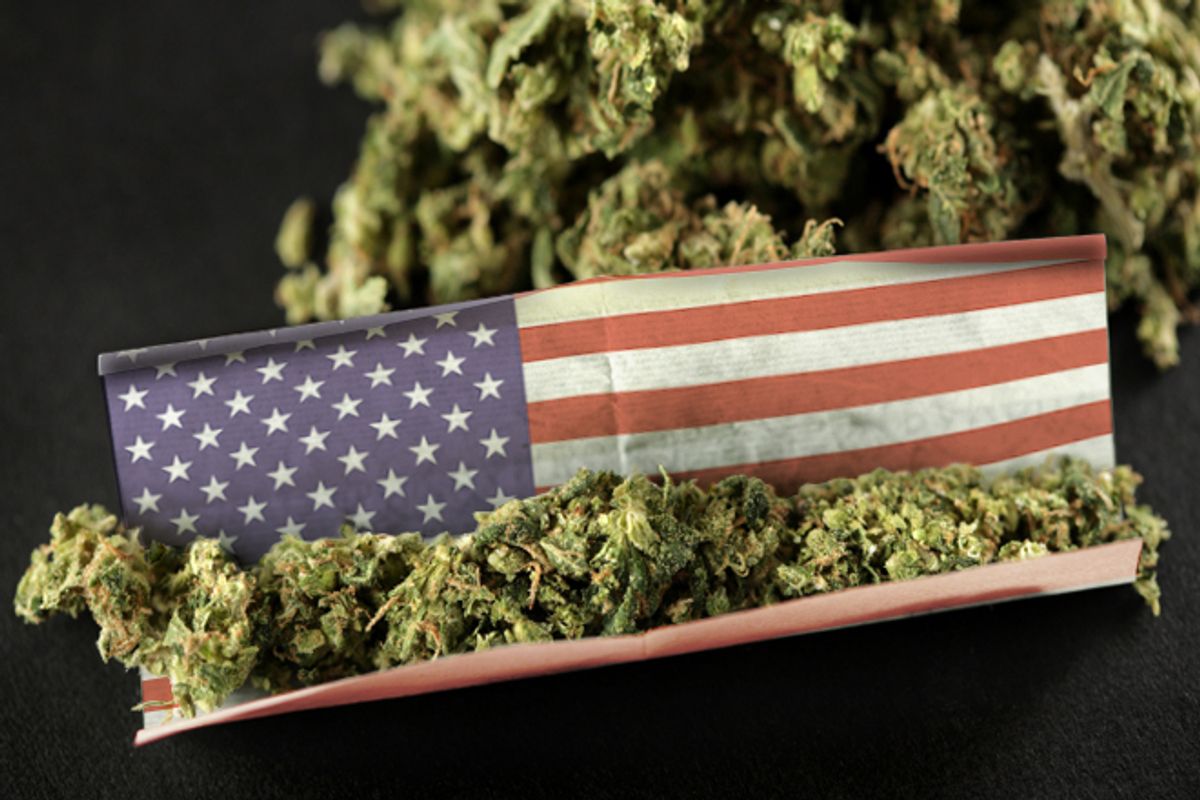 In the past year there has been an explosion of films that dare to intelligently explore the U.S. drug war.  Spurred by the rapid reform of cannabis policy, pot is increasingly becoming a centerpiece of American culture.

Out of the dozens of drug war films produced last year, these four stand above the rest, not just because of their technical excellence, but for their potential to provoke thoughtful debate on a subject of mindboggling complexity. Fortunately, each of these films is also engaging—even fun, at times—so that viewers don't have to choose between enriching their minds and enjoying themselves. Here’s why you should set aside the bong, power up the TV and watch these four extraordinary films.

1. Code of the West: Code of the West is a cerebral but accessible meditation on the drug war's collateral damage. It gives an eye-level view of a single group of conscientious individuals who saw an urgent need for reform and stepped in to fill it.

Director Rebecca Richman Cohen, a graduate of Harvard Law School, brings plenty of intellectual firepower to bear on the complex machine of state politics. She summarizes the complexity of the American federal justice system in a way that clearly visualizes the stakes involved. She makes the law real for the viewer. Had she stopped there, her film would have been a wonderfully illuminating educational video… that no one wanted to watch. Thankfully, she used her understanding of a complex system as a springboard to jump in two simultaneous directions—one a gripping human tale, and the other a transcendent examination of power’s corruption.

The gripping human tale is one in which Cohen skillfully blends policy with pathos. She counterbalances explications of drug war policies with fascinating character studies. The documentary's narrative focuses on the founders of Montana Cannabis, a compassion-driven medical marijuana collective in Cohen's Big Sky country backyard. Founders Tom Daubert, Chris Williams and Richard Flor witnessed the demand among sick Montanans to use medical marijuana and thought they could put together a more legitimate operation than some of the dispensaries that cropped up around the state after its voters approved a medical marijuana initiative in 2004.

They did everything they could to produce a professional, legal operation, even inviting local law enforcement to tour their facility. What happened to them, in the wake of a sudden and dramatic political shift, is nothing short of tragic.

This is how Code of the West finds its truly transcendent narrative – by balancing its human story and its deep legal understanding with a third story, one even more profound than the first two: the story of the lure of power. The forces that targeted Montana Cannabis and a dozen other dispensaries in a simultaneous sweep resulted from cold political calculation. While she focuses in on key political figures and holds them to account, Cohen reserves her harshest indictment for the political system itself, a vicious and calculating game which pays the wages of cruelty with a momentary bump in the polls.

[Note: While originally premiering at South by Southwest in 2012,Code of the Westwas rereleased in 2013 with updated reporting on the fates of the founders of Montana Cannabis.]

2. The House I Live In: What Code of the West achieves on an intimate scale, The House I Live In attains writ large. Director Eugene Jarecki—whose talent for intelligent yet sustainably outraged documentaries was proven with the anti-war screed Why We Fightin 2005—pivots his lens from the military-industrial complex to the machinations of an equally corrupt war fought at home, in neighborhoods and on street corners: the drug war.

Like Cohen, Jarecki makes use of human character studies to make complex policy real; but whereas Cohen's film offers complete, fleshed-out portraits of a single tight-knit group, Jarecki teases the viewer with brief humanizing vignettes, offering tantalizing glimpses of humanity across a wide spectrum of Americans, both rich and poor, white and black, cop and criminal. That the film keeps all of the characters distinct and relatable while simultaneously offering up a cogent critique of the U.S. war on drugs makes for a remarkable achievement.

The House I Live In leans heavily on interviews with top academics like Harvard law professor Charles Ogletree and savvy commentators like “The Wire” creator David Simon. Yet this film is unique for the way it subtly perforates the structural wall between studied human subject matter and the talking head commentators who traditionally provide context.

Blasé cops are the objects of the film in the same way savannah lions are the objects of nature documentaries. It's the cops who spout some of the most profound critiques of the 50-year-old war on drugs. Of course they would: they're on the front lines. Even so, the most brilliant example of the film's playful flouting of genre convention comes through its treatment of Carl Hart who, as a tenured neuroscientist at Columbia University has as legitimate a claim to the mantle of expert as any other of the film's interviewees. But in sharp contrast to the soft chiaroscuro glow used to signify the film's brain trust, Hart is lit exclusively in a harsh fluorescent.

Just as powerful is what the film doesn't show. A reformed drug dealer who grew up on the streets of New York reminisces with regret on a Florida beach as the sun sets behind him. He had to leave because the drugs and the lifestyle constantly haunted him, always luring him back into the trap. The only way he could escape the pattern, he says, was to leave the state and start again. But now the son he left behind has been arrested for dealing drugs.

The film shows his regret and feelings of guilt, but far more engaging are the questions which are never answered with certainty. Did he really have to leave New York? Did he do all he could to deter his son from turning to drugs? Those questions linger longer than the sometimes simplistic prescriptions of experts.

But following a structure similar to the standard street dealer's soft sell, this film delivers its first pleasures on easy terms but jacks up the social conscience as soon as viewers are hooked.

The first surprise comes almost right away, once the viewer realizes that the film takes its promise literally, describing in fetishistic detail every skill and trick any Joe on the street could use to become a drug kingpin.

Winding its way up the cartel ladder, the film's director manages to finagle interviews with workers at almost every level of the international illicit drug industry (although between interviews with street dealers and mules, kingpins like “El Chapo” Guzman remain conspicuously absent).

As it happens, every single interviewee is a man, which either reflects the male-dominated nature of a shadowy industry or a marketing decision by the film's producers, who appear to aim their cheesy, video game-inspired visuals at the vicarious pleasure centers of privileged teenage boys (R rating be damned).

Some of the film's message can be subversive, bordering on irresponsible. For instance, one of the interviewees (a white, middle-class teen right out of high school) outlines his business plan for supplying his bored classmates with ecstasy at private house parties.

As if to temper the impact of these moviemaking sins, the film also takes care, eventually, to reveal the consequences of making money selling drugs, as each drug dealer interviewed (with the exception of an unidentified, still-active street dealer in Detroit) gets around to telling the story of how he got caught. Informants usually (“someone turned me in”). Occasionally the story gets more gruesome, as when a former dealer lifts up his shirt to show the scars from the time he was machine-gunned at the end of a deal gone bad.

Such moments are powerful. But more powerful still is the lynchpin moment when the viewer grasps that not all of the former defendants in the criminal justice system were treated the same. Some had lighter skin, leading to lighter sentences. Some simply had more money, leading to no consequences at all. The revelation, never overdone, holds open the hope that the teenage boys illegally downloading the film might grasp the zenith of the film's subversiveness, and begin agitating for change.

4. Dallas Buyers Club:Although not technically a documentary, the masterful Dallas Buyers Club nonetheless makes the list for its ability to convey the complex policy behind the true story that inspired it. It’s worth the watch merely as entertainment, but it also asks a provocative line of uncomfortable drug policy questions.

An entire essay could be devoted to Matthew McConaughey's performance, which fleshes out a complete character by convincingly transitioning between every practiced mask his character displays to the world. But he also never fails to betray the still-acrid emotional traumas those masks are created to hide—the desperate, silent scream for help.

Not even Jared Leto, who nimbly handles every stumble of a drug-addicted transvestite on her way to rock bottom, can hope to keep up.

The film's most lingering delight is its courage to stare directly into the headlights of pernicious policy problems and refuse to blink. The putative villains of the film, the U.S. Food and Drug Administration, work tirelessly to keep life-extending AIDS drugs out of the hands of dying patients because, they claim, the manufacturers of those drugs have not submitted them to the required clinical trials to determine safety and efficacy. True enough, but in the face of desperate patients living on borrowed time, such claims ring hollow.

The film's fearless screenplay dares to explore FDA policy from all sides, showing the natural ambiguities behind every apparent injustice. Yes, people are dying while waiting for the required trials to run on AIDS medications; some, seeking a lifeline, sign up for the required trials only to receive a placebo. The outcome is a death sentence, but without the placebos, how will scientists know for sure which drugs are working? Without such knowledge, how will researchers build on any successes to design the next generation of drugs? The film daringly dangles such troubling questions, withholding the moral placebos of easy answers.

One of the drugs undergoing testing—the one promoted by the greedy pharmaceutical company—turns out to be toxic. The hospital, chasing the lucrative study dollars on offer, stubbornly continues the program at the expense of the suffering stricken. A heartless move, but by the end of the film the viewer has learned that the valuable data gained from the study allowed researchers to tweak the dose and develop new cocktails which yield far better patient outcomes.

Does a positive outcome vindicate the infliction of suffering in the name of science? Are the needs of future generations of AIDS patients preeminent over the needs of those afflicted today? Each viewer must answer in her own way, according to her own values. These questions, paired with a ubiquitous but never blatant double standard between alcohol and cocaine, nag at the conscience. At a time when ideologues of every stripe repeat absolutist platitudes against both illicit drugs and the laws written to control them, such nuance constitutes an urgent public service.