Rocking in the Oval Office: 17 catchy songs about presidents

Neil Young, James Brown and more celebrate (or slam) our heads of state 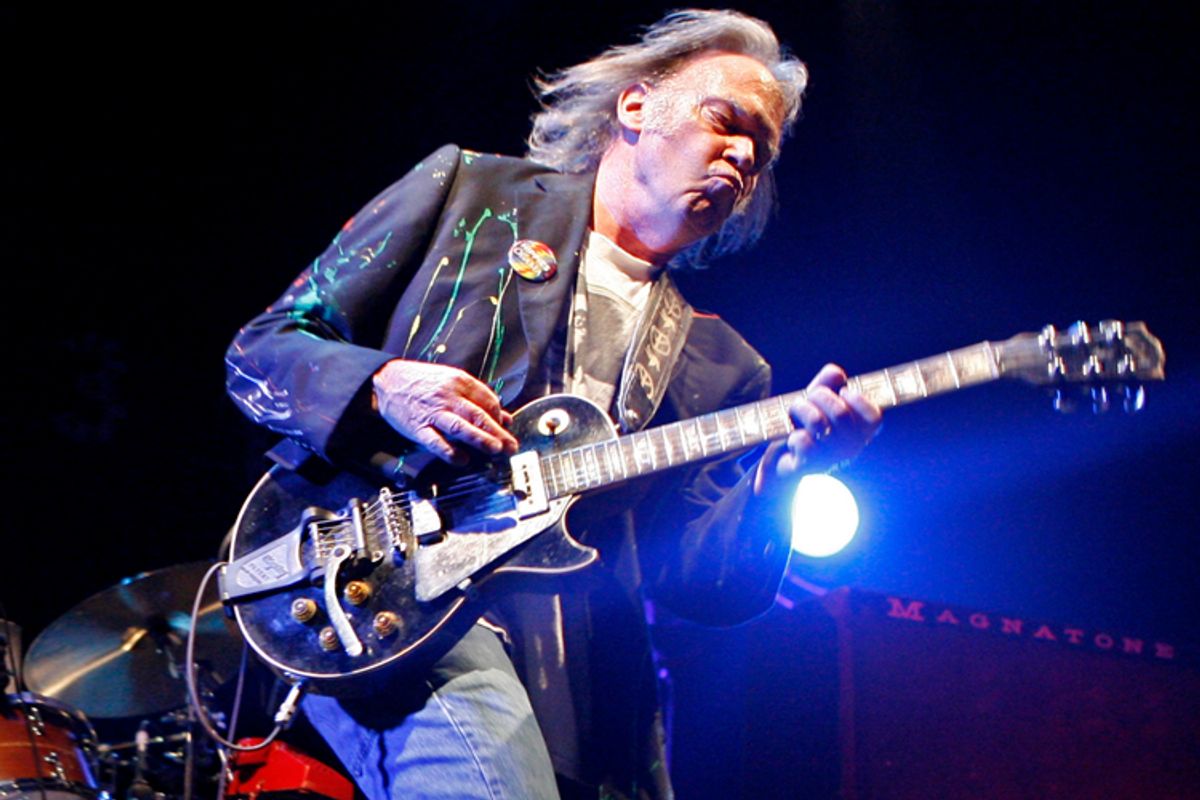 You'd think out first president would be the subject of numerous songs celebrating his wooden teeth and refusal to lie, but in fact he doesn't seem to have made much more impact on popular music than Millard Fillmore. If you can only find one Washington song, though, you could do worse than this quite NSFW effort by cartoonist Brad Neely, which presents our Founding Father as a thuggish superhero sporting multiple phalluses of doom. It does make you feel sorry for the British children, though.

A cheerful tribute to the military exploits of Colonel-and-later-President Andrew Jackson, complete with cruelty to gators. The song is focused on fighting against the British, though much of Jackson's campaign involved crushing the Creek nation. Later, as president, Jackson pushed through the Indian removal acts and the Trail of Tears. That's not the sort of thing you want to put in a jaunty song, though.

Little known psych-punk outfit the Walnut Collective sling power chords while bellowing pro forma lyrics about how Buchanan had a heart of gold (he didn't) and owned slaves (he didn't do that either; he just supported slave owning on general principle). The utter lack of interest in the subject matter, underlined by images of slacker dudes drinking and partying, seems a fitting commemoration of our worst president.

Best Friends Forever, "My Head in Front of Your Head"

If the Shaggs performed "Schoolhouse Rock," you'd get something like this. Minneapolis indie pop duo Best Friends Forever assure Honest Abe that they would have put their heads in front of his head to take Mr. Booth's bullet, and made sure his kids didn't get smallpox (not necessarily in that order.) Spielberg's "Lincoln" would have been infinitely improved if this had played over and over and over on the soundtrack.

Presidential assassinations generate a lot of music. This is a traditional song that turns a moment of national mourning into an extended exercise in dry, low-key humor. It does include the important historical detail that President Garfield's wife called him "James." Never know when that's going to be on an exam.

Yet another insouciantly chipper song about presidential assassination: Poole's declaration "you're bound to die" seems a good bit too sanguine to be altogether seemly. The Roosevelt doing his best here is Teddy; you can imagine him twisting his mustache and squinting that monocle to the sprightly fiddle. Bill Monroe also did a lightning bluegrass version of this tune.

Annie the Musical, "We'd Like to Thank You Herbert Hoover"

I can't be the only one who thinks of this song every time Herbert Hoover's name is mentioned. A nicely mean-spirited counterpart to the better-known "Tomorrow."

Attila the Hun, "Roosevelt in Trinidad"

Calypso performer Attila the Hun (Raymond Quevedo) celebrates FDR's trip to Trinidad in 1936, managing somehow to give even the most banal campaign message lyrics ("charming and genial personality/and his wonderful urbanity/we were struck by his modest style") a pleasing lilt. Ry Cooder covered the song too, with slicker production and less assured vocals. It's not ideal, but Roosevelt was genial enough that he probably wouldn't have minded.

This was written by singer-songwriter Danny O'Keefe. The hagiography of Truman is a little hard to swallow — is he supposed to be especially honest because he dropped atomic bombs on civilians without feeling apologetic? Ah well; the main thing is Smithers' lovely, liquid guitar-playing, a lot truer than whatever macho slogan some president decided to put on his desk.

Finally an assassination song that sounds mournful rather than amused. The drumbeat singling Kennedy's death is a little cheesy, but the gospel moaning has a convincing grief-stricken chill.  As with Truman and FDR, the praise ("he had equality in his eyes"? Seriously?) is a bit overdone, but that's how songs about the presidents go, I guess.

Fulsome praise for our chief executives gets old quick … but, on the other hand, earnest folksy protest songs can be even worse. So I've avoided Tom Paxton's real hippie anti-LBJ song in favor of "Hair's" slick, toothless, cutesy "hippie" drug anthem.

Neil Young quavers and staggers through an elegiac dream of a world in which our most corrupt president stumps across the country in pursuit not of power, but of somehow spiritually sucking less. With all respect to John Adams, there will never be a better song about Richard Nixon.

I'd always thought this was about Tricky Dick as well, but apparently it's actually Brown's take on Gerald Ford. Which means that Gerald Ford — that's Gerald Ford — has inspired more rap songs than just about any other human being. Combine that with his contribution to "Saturday Night Live" skits, and you can almost forgive the guy for pardoning Nixon.

Crucifucks, "Hinckley Had a Vision"

There are lots of great punk songs about hating Reagan; the Minutemen's "If Reagan Played Disco" and the Dead Kennedys' "Bleed for Me" are two favorites. But for sheer unhinged snottiness, nothing can quite top the Crucifucks cracked ode to Reagan's would-be assassin.  "I want to chop off the president's head/and mail it to them in a garbage bag!" The way Doc Corbin Dart sings it, you know that's a sentiment that comes from the heart.

This is a lot like Brad Neely's George Washington post in its NSFW celebration of a president with penises. Where Neely felt the need to provide a steady flow of imaginative whimsy, though, Lil B embraces the joy of repetition.  Not only does he rap the line "I'm Bill Clinton/fuckin' all these women," over and over, but he laconically refuses to even try to rhyme anything with "Lewinksy."

The Legendary K.O. lifts the Ray Charles sample and the beat from Kanye West's "Gold Digger" and offers a litany of George Bush's sins. The track nods back to politicized early hip-hop tracks like the Treacherous Three's "Christmas Rap"'; funky, straightforward, and dripping with good-natured bitterness.

There are tons of songs about Barack Obama on YouTube, but this one is a standout. This Ghanian reggae performance is pleasantly lo-fi, with a catchy chorus that'll have you repeating the man's name clear on through President's Day 2015.