What "The Walking Dead" can learn from "True Detective" 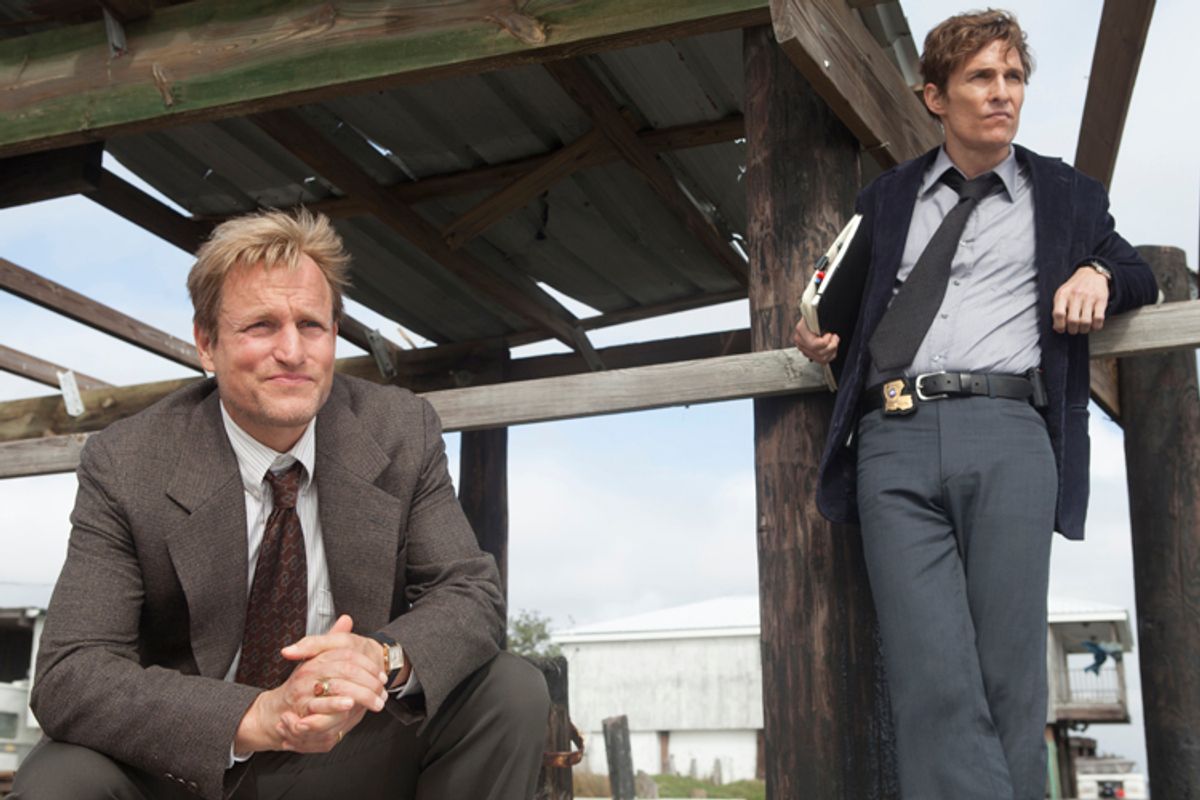 Now that "The Walking Dead" is back from its midseason hiatus, Sunday nights are particularly special for those who prefer to start their week with an overarching sense of unease. Last week, the show picked up with most of the series regulars having emerged from a devastating battle now splintered into wandering factions. The episode concentrated mostly on the gory survival skills of angst-driven teen Carl and pseudo-samurai Michonne. Last week, HBO's bayou noir series "True Detective" also reached a midpoint of sorts, culminating in a spectacular feat of small-screen filmmaking: A desperate, on-foot escape from low-rise, low-income housing in the midst of an erupting riot -- all shot in a single take!

This week, "Dead" continued along its predictably gruesome path with survivors plowing through zombies as they tried to relocate one another. Forgive my butchered astronomy, but isn't the theory that the universe expands outward as far as possible from the Big Bang, contracts back into a tight, incomprehensibly dense wad of matter, explodes outward again, and then repeats the cycle infinitely? Sadly, "Walking Dead" is mirroring that paradigm -- or at least it's starting to feel as if it is. A band of heroes forms, led by the valiant yet reluctant born leader Rick, and holes up somewhere supposedly safe. The band is split, some members are lost. It wanders for a bit, then reforms. New members join -- some decent, some malicious -- if only for a while. Maybe the cycle is not identical each time -- "Dead" is on its fourth season -- but the images of so many undead heads bursting like red grapes only help to blur the inflection points of the narrative together.

There's a scene in last night's episode of "True Detective" wherein detective Rust Kohle (Matthew McConaughey) tries to explain similar cycles of repetition to a couple of clueless interrogators and did a far better job than I did above. "Someone once told me, 'Time is a flat circle," he says, oozing hard-earned wisdom and fatigue. "Everything we've ever done or will ever do, we're going to do over and over and over again." Even if you have not been as enthralled as I have by the character's drunken but eloquent, theoretical, metaphysical ramblings up to this point, if you follow the program at all, last night's episode featured the moment for which you have been waiting. The truth implied by the show's title truly began to fracture. The detective part didn't hold together so well either, what with Woody Harrelson's Martin Hart going violently rogue and threatening to torpedo not only the case but both men's careers.

This was a turning point as defined by Joseph Campbell and "The Empire Strikes Back." In four and a half succinct episodes, we saw two cops with very different philosophies get on the same wavelength to achieve a common goal. But now, with that achievement in question, virtually anything can happen. And "True Detective" is setting up some frightening possibilities. Right now, as far as "The Walking Dead" is concerned, my biggest fear is that there will only be more of the same.