What's the defining artwork of the Obama years?

From "Django Unchained" to "Breaking Bad," what will remind us of his presidency years from now? 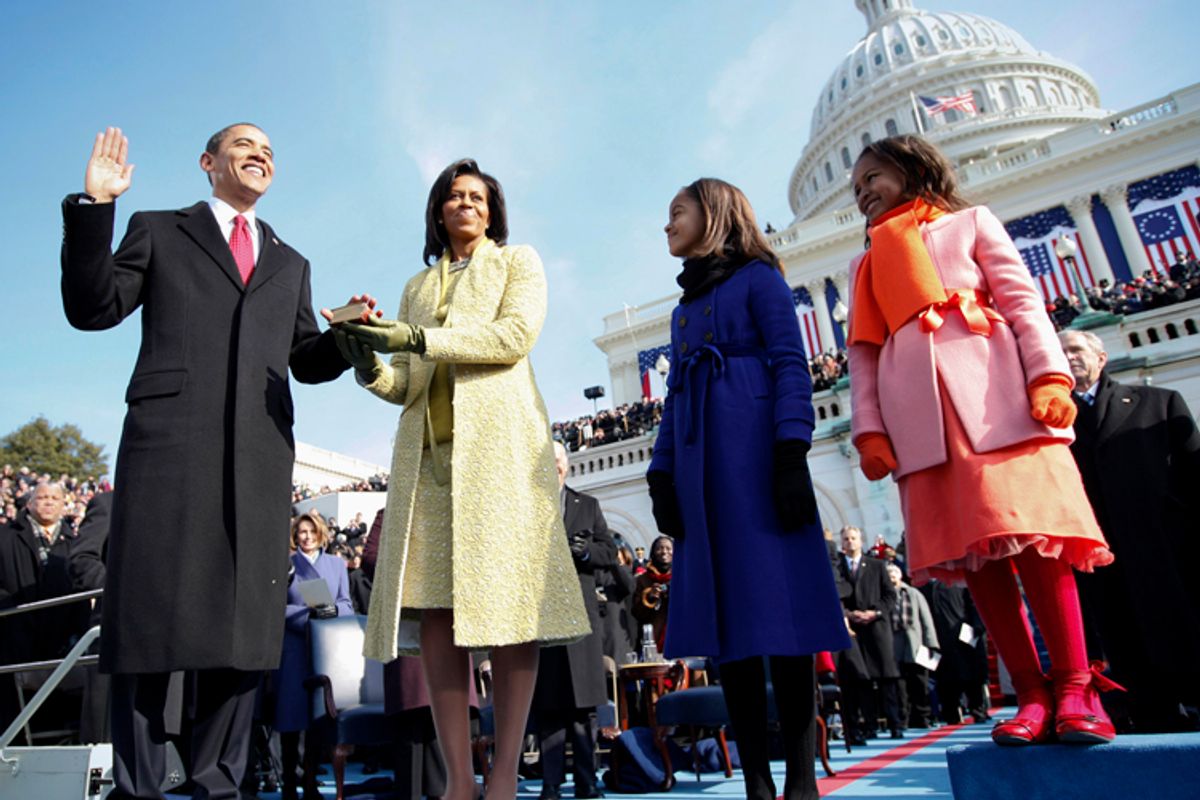 As we’ve cruised past the five-year anniversary of his first inaugural and mark another day honoring his predecessors, it’s as good a time as any to ask: What mark has Barack Obama’s tenure so far left on popular culture?

You can’t look at the paranoid thrillers of the 1970s -- “Klute,” “Three Days of the Condor” and the like -- without thinking of the influence of Richard M. Nixon and the nation’s malaise. Bill Clinton’s 1990s, with a young leader in charge of a nation at peace, were defined by the time-killing, privileged youths of MTV. And George W. Bush’s 2000s were decadent in their treatment of material wealth (consider, say, the more fashion-oriented seasons of “Sex and the City” and all of “The Simple Life” early in his presidency, and the rise of the “Real Housewives” franchise past its midpoint) as well as unflinchingly assured of America’s right to maneuver however it wanted in the world (the torture-glorifying “24”). And every 10 years or so in the second half of the twentieth century, John Updike put out a “Rabbit” novel summarizing, in order, post-fifties anomie, wild late-sixties unrest, early-eighties gluttony and the passing of a generation torch in the nineties. Perhaps it only works in retrospect, but there are certain discrete periods of time that appear entirely defined by the personalities and philosophies of the man at 1600 Pennsylvania Avenue.

But the Obama era, one that has coincided with greater-than-ever atomization of entertainment such that no one can be assured that anyone is watching the same stuff, has not lent itself very well to artwork that gets at the national mood.

“If you were thinking of a literary counterpart to the Obama presidency's evolution; I don't see one -- and certainly don't see a novel cycle that encapsulates the Obama era in a ‘Rabbit’ way,” said the literary critic Liesl Schillinger.

But that’s, perhaps, not coincidental. The Obama years have seen what may be the final collapse of leisure reading as a mass pursuit. What book could be said to summarize the Obama years in America, when such a small subset of the nation can be expected to have read it?

And that’s to say nothing of how diffuse the issues at play here are. The ideas underpinning, say, the Bush years were fairly straightforward and easy to digest. What novel or movie could possibly take on the issues we’ve been dealing with -- the long recession, the rise of awareness among the “99 percent”?

Television brand analyst and film critic A. S. Hamrah cited, too, works that were self-consciously muddled as ones that people will point to of this era -- movies like “Django Unchained” and “The Dark Knight Rises” that strenuously attempt to make all manner of points, all at once. “The confusion is part of the work.” He cited, too, the books of Sheila Heti and Tao Lin and the art of Ryan Trecartin as emblematic of the era for how willing they were to indulge that era’s confusion.

But Heti’s “How Should a Person Be?” or Lin’s “Taipei” would be consumed by a very limited subset of America. What can we extrapolate, say, from the success of the Marvel movie franchise or of a backward-looking show like “Mad Men” during Obama’s presidency?

Probably not that much. People will always like action and nostalgia.

Even the art you think might be about the present morass studiously disavows ties to reality -- “Homeland” and “Scandal,” for instance, preserve outlandish elements so they can’t really be seen as any sort of comment on the present occupant of the White House. Even Richard Blanco, whose poem at Obama’s second inauguration was widely praised, said that his poem should not be considered as an explicit comment on the president or world events: “I didn't sit back and say ‘what has he done that i can write about?’ Every work of art looks forward.”

David Greenberg, an associate professor of history, journalism and media studies at Rutgers and the author of “Nixon’s Shadow,” said “You can take anything popular, extract themes and claim it represents the culture. And in some sense, it will, because it strikes a chord with people. There’s likely to be correlations between what is popular in a culture and what is popular in a presidency.”

That may be bad news for us. Maybe the works of art that say the most about America now weren’t made as explicit responses to the Obama years, but they got popular as a result of just how well they chimed -- and things aren’t looking pretty. Asking what’s popular in culture that correlates to the Obama presidency got responses invoking confusion, desperation -- Schillinger cited “Breaking Bad” -- and the frustrations of learning that political horse-trading is a necessary evil. Per Greenberg, “‘Lincoln’ is a rebuke to the image of Obama in 2008. It’s the recognition that governing involves politics and trade-offs.”

Said film historian David Thomson: “‘The Wolf of Wall Street’ and ‘American Hustle’ are both symptomatic of something that I think is there in the culture. Yes, we know there is corruption on a major order, but we don’t think anything can be done about it.” Yikes!

Speaking about the issues of the past five years, Hamrah said, “the one thing they have in common is that they speak to the collapse of institutions. This has affected how art is produced. Culture is produced more and more by a single class of person, and the amount of things that can be expressed by culture become less because of that.” This is hardly Obama's fault, but has been concurrent with his presidency in a way that ensures people will remember the late 2000s and early-to-mid-2010s as a time of ever-foreshortening options.

In other words, if it’s no longer viable to be an artist unless one is independently wealthy or backed by an ailing corporation, who will speak for those without those advantages? Sure, some art that defines its era is backed into accidentally -- “The Simple Life” as symptomatic of Bush-era avarice and laziness. But the closing-off of certain options in the Obama era for would-be artists may mean that the defining art of the era, the stuff that gets at the issues of the time not accidentally but on purpose, is that art that was never made.