Nixon still runs the GOP: How the white South dominates the party

Many believe that Reagan or Goldwater founded modern conservatism. But it's Nixon whose legacy truly lives on

By Robert A. Slayton 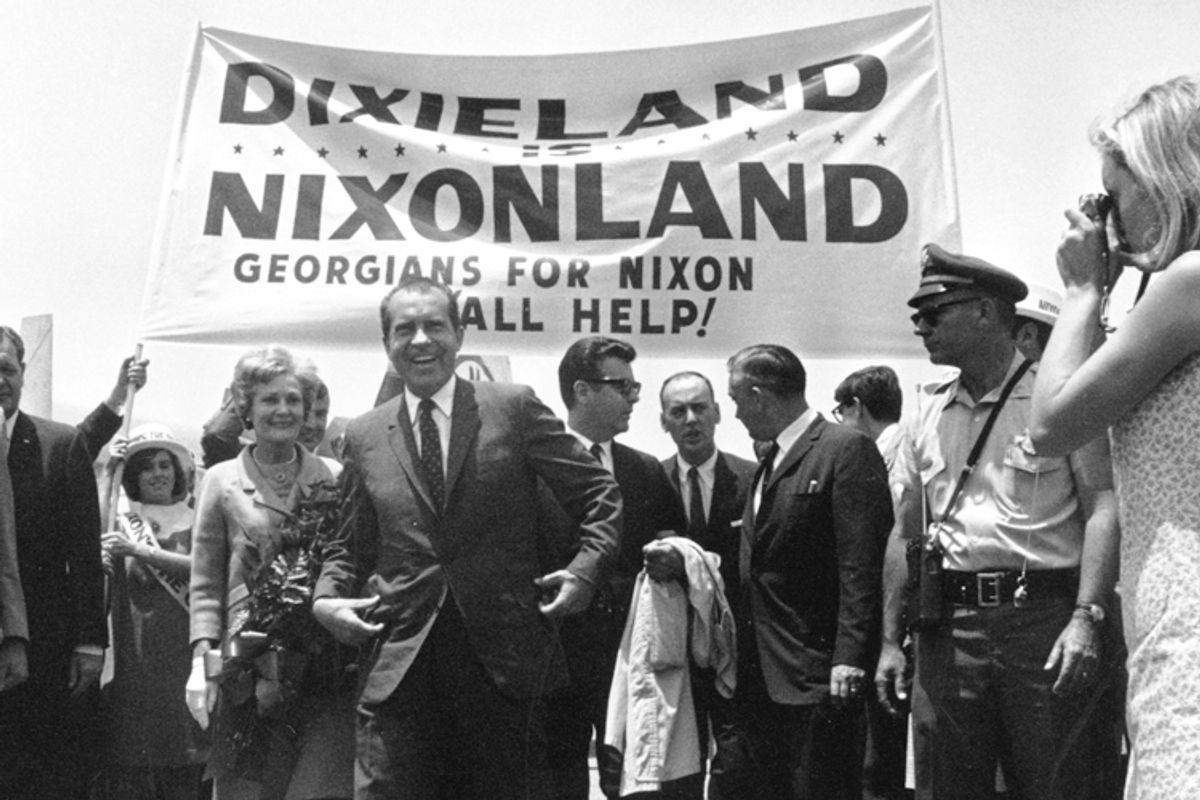 The issue of who founded modern conservatism is important not just to the historical community, which lives to debate the origins of anything and everything. It has deep significance for any politician who seeks to invest himself with such august symbolism, as with anyone who tries to fathom American politics today.

Barry Goldwater is a logical candidate. Despite his failure in the presidential lists, he advocated conservative principles long before any other national political figure, making him a prophet before his time. Pat Buchanan dubbed him no less than “the father of us all.” Daniel McCarthy, in The American Conservative, believed that “his place in conservative history, and conservatives’ hearts, is settled … each branch of the conservative movement can plausibly trace itself back to some tendency… in the Goldwater effort.” And Phyllis Schafly called the Arizona senator “the undisputed original leader of the modern conservative movement … It is hard to overestimate the importance of Barry Goldwater.”

Ronald Reagan is the current favorite. Fox Nation quoted Nile Gardiner of Britain’s conservative paper the Telegraph that the former actor created “the greatest U. S. presidency of the 20th century.”  The Heritage Foundation pronounced Reagan “the second most popular and consequential Republican president after Abraham Lincoln … he is credited with reviving the national economy, recovering the nation’s optimism about the future, and taking the pivotal steps to end the Cold War struggle with the Soviet Union.” The social conservative champion Family Research Council noted that, “Every Republican presidential candidate claims the mantle of Ronald Reagan … As they jockey for the … presidential nomination, they invoke Ronald Reagan:  ‘I believe as Ronald Reagan believed …’”

An unlikely candidate, however, would be Richard Nixon. Despised by liberals for his early red-baiting, his presidential record remains shocking by modern conservative standards. He proposed, for example, wage and price controls, a massive federal takeover of the national economy that would be branded Sovietism by today’s right. Under Nixon’s watch, the federal government created the Environmental Protection Agency, and introduced affirmative action. One blogger wrote that no Democrat today could get away with what Nixon tried to do, let alone a Republican.

Yet, in one critical way, Nixon really is the creator of conservatism as it exists today in America.

In the late 1960s, Nixon enacted the Southern Strategy, a plan to shift states below the Mason-Dixon Line from Democratic to Republican. The standard analysis is that this plan was based on racist claims, that he labeled the Dems the party of civil rights, and appealed to Southern voters who fought these advances. Top strategist Lee Atwater denied this, claiming victories because Republicans appealed, not only to regional issues like states’ rights and forced busing, but to economic issues like taxes and the size of the federal government. Regardless of this argument, the results are clear: The South is now a blaze of red states.

The most basic fact of Southern history is that it lost the Civil War. In a nation that extols winners and champions, they remain the sole region to be defeated. Southerners have never forgotten this, never entirely gotten past it.

As a result, the South has evolved a defensive culture. Harkening back to Reconstruction, they see themselves as often taken advantage of, the loser despite their best efforts,  the underdog, resentful.

More than anything, it is this outlook that has been transplanted into the modern Republican Party. Unlike their buoyant outlook under Reagan, conservatives now see themselves as only Southerners used to, as casualties of a national assault on their values, confronting grim results. Yet, like Southerners who denounce Reconstruction and deny that they ended it by using racial terrorism, today’s conservatives also make claims without facts, buttressing their self-image as victims. From Alaska, Sarah Palin endlessly tilts with her "lamestream" media, despite conservatism domination of cable news and talk radio. The National Rifle Association ignores its string of victories and fights for Second Amendment rights on the grounds that if they compromise one single inch, their clever and nefarious opponents will grab the whole pot. Defeat is only a drop away, if you’re a conservative.

Nixon won, and made his party a power in the South, turning that region into a Republican enclave. But by so doing, he changed his party and the movement, far more than his impact on states like Georgia and Mississippi. Now, like the South, modern national conservatism is in a perpetually defensive posture against better, smarter opponents, with disaster imminent and compromise impossible. The Republicans have become the party of "Gone With the Wind," Scarlett always on the brink of losing Tara.

Robert A. Slayton is professor of history at Chapman University.

MORE FROM Robert A. Slayton